As water temperatures rise, flows normalize and trout face more pressure, my baseline strategy will be to fish caddis and midge patterns. 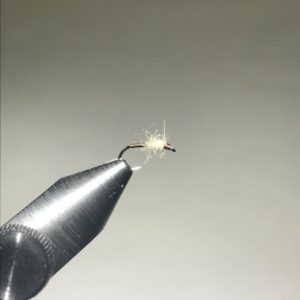 I’ve really enjoyed chucking streamers (prior post here) and will keep doing so for as long as I can, such as at dawn and on rainy days. But, my gut says that the window for everyday streamer fishing is closing.

This morning, I’ve been tying two patterns, one familiar and one new: Al’s Rat and the Ginger Wingless Flymph.

I’ve had good luck with Al’s Rat, which is a simple fly meant to imitate a midge or Baetis pupa. It is a simple tie: a #18 or #20 wide-gape hook, brown thread (spun to suggest segmentation) and muskrat fur. I found a patch of muskrat at Concord Outfitters years ago and bought it because, well, I just thought it would be cool to have. I didn’t have a fly pattern in mind for it until I years later read about Al’s Rat. 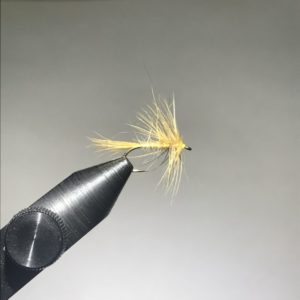 The pattern at times has worked well on picky trout when larger or complicated patterns spook them. I think the pattern works because of color contrast, and I’m guessing that the waterproof muskrat underfur retains air bubbles.

The pattern suggests a drowned caddis, but I also am hoping, in spite of the tail, that it also could pose as an emerging caddis. Trout can be very aggressive when they see a caddis pupa rising quickly towards the surface.

I really like the ginger color on the Orvis Keough Hen Neck. It was on back order for quite a while due to high demand and finally arrived recently.

4 thoughts on “At the Bench: Al’s Rat and the Ginger Wingless Flymph”