On Memorial Day, I fished the Westfield River’s East Branch at the Chesterfield Gorge area (our overview here). I’ve not been in a while, and it was as scenic as always.

There’s no cell phone service down there, and it is a wild and bucolic area, where anglers can give each other plenty of room.

You’re going for stockies there, as the holdover rate is minimal most years, and I highly doubt there are wild fish. It is a freestone with gargantuan ups and downs in terms of flows and water temperature. To give the fish a break when the water is hot, I fish it only in the late spring and fall.

The numbers of fish stocked don’t seem that significant most years, but I think it is the prettiest water in the whole Bay State. And, when you ping fish, you’ll find that they’re not that selective. It isn’t about fly selection, in my opinion.

When I first started fly fishing, that was the first river that I targeted. Given the forgiving fish, it is a great DIY spot for beginners, and I’d encourage you to check it out.

Memorial Day ended up being a double-digit day for me, but the goal was to fish dries. Flows were reasonable, the sun was out, and the water was 60 °F. I was hopeful. Alas, there were no risers. All of my fish were taken via streamers and nymphs. But, such fresh-off-the-truck vicious strikes! There’s nothing like a strong take when you’re swinging streamers or wet flies.

I hit my usual spots, and the fish were there. They were in the deeper slots and the softer riffles. Some of the areas required serious hiking. Some required deep wading, and, even though I had spikes on my boots, there were quite a few near-falls; the boulders there are large and very slick.

I crossed paths with another angler, named David. He is the only other tightliner into whom I have ever run while there. Last year, he broke his leg while wading in ankle-deep water. His foot became wedged between some rocks, and he fell over, breaking his tibia.

Without cell phone coverage, he slowly hobbled over a mile back to his car and made it back home. So, some advice to the intrepid: boot spikes, a wading stick and move very slowly!

Most of the fish that I saw were the usual 15″ rainbows. A few were jumpers that pulled a lot of line. There was a smattering of beautiful brook trout, too. 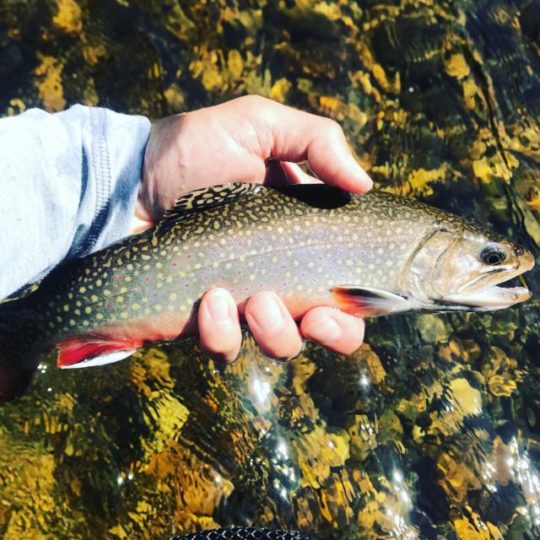 All in, it was a nice change of pace: beautiful scenery and easy fish. I love the wily Deerfield and Farmington fish and will continue to avoid the zoo and the trash at the Swift for as long as I can. The Gorge area is a nice and occasional respite.