My son, Wynn, summed up a recent day of fishing during the drive home: “Ahhh.  The dark time is over.”

Indeed it was!  No more winter for us.  Days were getting longer.  We had found stocked rainbows at three local rivers and put some of them in the net.  And, all the while without wearing jackets.

We had to work just hard enough to feel that we earned each fish.  A few days before DFW had tossed them in.  The areas we fished already felt a bit picked over.  The fish were not looking at egg patterns or anything bright anymore.  Small bead head nymphs placed in the feeding lane usually took the indicator under water. 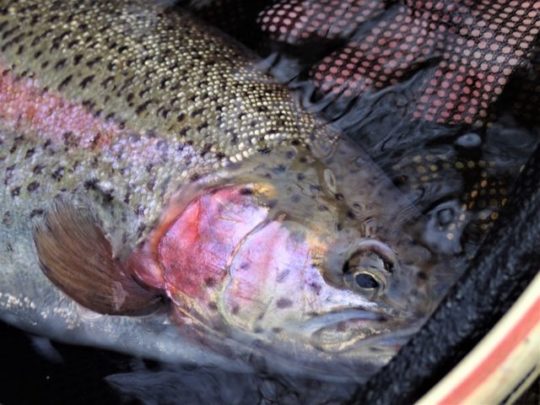 Wynn got several compliments on his casting.  We encountered several bait-fishers, who were uniformly friendly and predominantly older.  They would stop and watch my nine year-old laying the fly line down and mending (and, sticking fish) and say something like, “I’ve always meant to learn how to fly fish.”

After offering some encouragement to a few, I came to realize they had no intentions of ever learning.  One asked if the white indicator was a marshmallow.

We fished another place that Wynn calls “the sucker spot.” At first glance, everyone’s eyes got big when they looked down from the bridge and saw many large fish below.  Most anglers grumbled when, after 20 minutes, they found out that they were the biggest sucker at the pool.

Wynn thought that the sucker spot was the greatest thing going.  It seemed that, for him, seeing the huge fish was like picking out your sandwich ingredients at Subway.  He could see the fish moving around, and a few of them were huge.  But, those suckers were bigger than foot-longs.

He would sit there and drift flies on them for hours until he eventually hooked up with one.  They fought like heck and made a few line-peeling runs.  I took a nice one over 20” on a tiny green prince nymph.  As I was releasing it, I heard some hollering.

Wynn’s rod bent double, and I figured he must have foul hooked a pretty big fish. After about five minutes, when I saw what he had, I couldn’t believe my eyes: this fair-hooked sucker looked like a striped bass!

Suddenly, I got really nervous, wondering how the heck he was going to land this fish. I waded out mid-river to try and play defense against a downstream run.  Eventually the fish seemed to grow tired of the charade more than tire out physically.  I slid the net under the head and lifted it into the net.  Success! 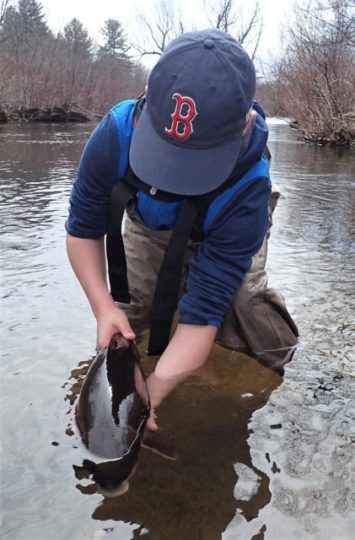 It turned out to be the biggest fish Wynn had landed on a fly rod: an enormous female white sucker that was between five and six pounds.  Both of our eyes bugged out–we couldn’t believe how big it was!  The fish was big enough that a cyclist going over the bridge stopped to exclaim and ask questions, which only added to the fun and excitement we felt. 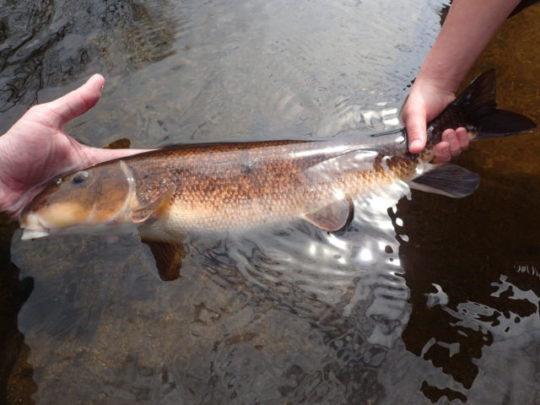 Over the past week, we also chased wild brookies in a small stream, where the high water made things challenging.  By landing one on a streamer, it was the only time lately where I was the top rod in our duo.  At all the other spots, fatherly pride had allowed me to tolerate Wynn pointing out how many more fish he was catching.  It didn’t slow down much when I pointed out that I was giving him the best spots, retrieving his flies from trees, and stopping to net his fish.

I thought about returning at least a portion of the big talk, but I am glad I passed.  On our next little trip Wynn, picked up two largemouth bass at the lake near our house while I failed to land any. 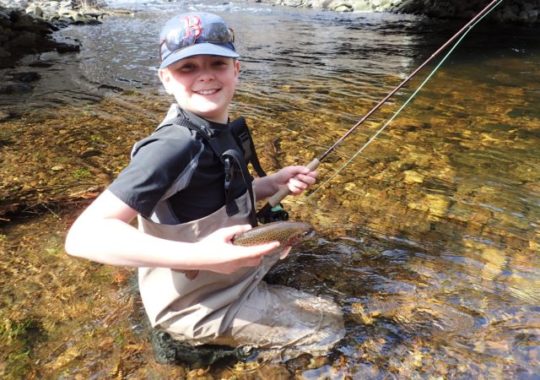 Wynn’s next-near philosophical quote: “Blueberry Eggo waffles may be the best thing on Earth.”  As for me, I prefer fishing with my kids to waffles.