With the forecast calling for warmer weather on Saturday, I resolved to go fishing. I had some morning commitments, and I knew I would get a late start, but there are some days that you cannot just pass up.

By the time I finished my errands, it was already 1:30. After deciding the Deerfield and Squannacook were too far for an evening trip, I revisited the Exeter.

The parking lot was full of cars, but people were slowly leaving. A few anglers I talked to reported little to no success. Then again, I saw them fishing the same 100-yard stretch of water over and over. I decided to give it an hour-and-a-half before moving on.

The first few spots proved fruitless. I adjusted weight, changed flies, etc., without success. The learning curve with Euro-nymphing proved tough thus far. Either I would snag bottom every cast or lead my flies too fast. I didn’t have a feel for what I was doing, and wondered why I purchased a new rod. If it ain’t broke, right? Eventually, I caved and put on an indicator.

Two casts later, I was tight to a fish. After a spirited tussle, it came off. Darn! Another cast. Set. Off. Darn!

With a renewed sense of confidence, I took off my indicator and returned to tightlining, just ’cause. Five casts later, my sighter jerked forward violently, and I hooked a good fish. After some side pressure and a short downstream chase, I admired a decent holdover ‘bow. Pay dirt.

It was at this time that I had a bit of an “aha” moment, and suddenly, my casting felt more comfortable, I lead flies more confidently, and my arm hurt less. It was as if someone flipped a switch. 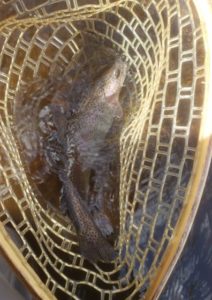 I decided to revisit a confidence spot. With the lack of rain in recent weeks, the water level had dropped over a foot. Normally submerged dead-fall and boulders were now exposed, and the layout of the run changed. Maybe I’m used to fishing it in high water?

I picked apart some choice seams and got into some fish. Over the course of the next couple hours, I landed a good number of trout and a pile of fallfish.

Eventually, I decided to yield the spot to another angler and scouted further downstream. Unfortunately, the action died down, and I didn’t get any more takes. No problem; my day couldn’t have gone better. I decided that one or two more fish wouldn’t make a difference, and I wrapped up early.