We live in a golden era for neuroscience. And, now, there are data that explain why we love fly fishing so much. Let me explain. 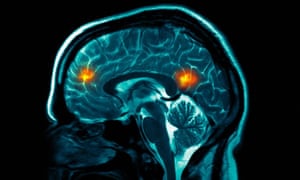 As brain scanning technology has become cheaper and more ubiquitous, studies of the brain have increased. These scans show if and where areas of the brain are activated. If so, those areas are “lit up,” appearing as bright spots on the scan imagery.

All this means that neuroscience is the hottest field right now at medical schools. There’s so much new data, and many of the brightest minds are studying the mind-body connection that science now know exists and regards as potent.

There’s much we don’t know about the brain, but we do know this: dopamine is very powerful. It is a neurotransmitter that makes us feel great, secure, confident and accomplished.

We need dopamine. We crave dopamine. It literally causes a high.

You also can trigger dopamine by ingesting it from without: e.g., alcohol, nicotine, marijuana, cocaine and opioids. (For some people, these substances can literally re-wire the brain, due to “neuroplasticity“, leading to addiction. Sadly, it can be very challenging to re-wire the brain again.)

All this happens because the brain is a very finely-tuned organ loaded with a powerful internal “rewards center.” When you do something the brain likes, you’ll feel good.

That can involve fishing.

For our ancestors, catching fish or bagging game meant that they could feed their families. They also could salt and store the surplus and perhaps survive another lean and cold winter.

So, the brain smartly (pun intended) created a particular reward feedback loop: when you corral significant protein, you feel great.

I have to say, in my life, there are few better feelings than landing a large and wily Farmington brown trout during tough conditions. I feel amazing and amazed, like I am on top of a mountain. My friends who hunt report the same. And, neuroscience explains all that.

Conversely, when I’ve not fly fished in a while, there’s a certain emptiness. I miss it and can feel wistful. That’s because my brain misses the dopamine.

Finally, here are some data from Harvard Professor Daniel Gilbert. He did a study, showing people a bunch of photos and asked them to pick out the one that made them feel happiest. The winner? A scene of a fertile valley, with animals, moving water, mountains in the background and lush foliage all around.

So, go fish, my friends. It truly, truly is good for you. Our brains are wired for it.

12 thoughts on “Fly Fishing Is Good for Your Brain, Part 1: Dopamine”