I discovered a large spider web in my left wading boot when I went to pack up the car.  I’ll let that serve as the metaphor for how often I have been fishing lately.  I have been too tangled in my current web of life to make it to the water.

However, I snuck out to the Swift on a Sunday afternoon a few weekends ago.  Note that this was just before it got stocked, and there were some mayfly hatches going on, but due to the fact that I didn’t post up “swiftly,” it is no longer an up-to-date river report.

I hit a favorite stretch of water below Route 9 and above Cady Lane.  I go to the Swift specifically for the plentiful and beautiful brook trout.  For me, nothing is much more fun than casting dries to colorful hand-sized brook trout in clear water.

However, I was greeted not by schools of fish but by flocks of male mergansers roving the river.  I tried keeping the fish-eating birds away from my spot by waving my arms, but that met with limited success.  Once they realized I was a dopey angler with a little graphite wand they started sneaking right past me!  Perhaps this was the reason that the only fish I found initially were brookies under four inches.

Some might laugh at me for fishing to them, but I enjoyed catching a few of these tiny gems.  They still required an accurate cast within about six inches of the overhanging grass that was reaching out over a deep slot along the bank.  The drift had to be true, the hook set patient and relaxed.

Even though the fish were tiny, it felt good to shake the rust off.  I pretended I was making a very technical cast to present my little tan caddis to a suspicious 18-inch brown sitting tight to the bank.  Reality was pretty close to that, only the target fish was different.  The payoff was still worthwhile.

After a few minutes of that, I moved upstream, deciding to stretch my legs and cover water to look for rising fish.  There was a smattering of insects hatching, with two sizes of Blue-Winged Olives, a handful dark and light caddis, and the ever-present midges.  I know that both the fish and myself have a sweet tooth for BWOs, so I was hopeful a fish or two may have taken notice.

I eventually saw a single rise, and plopped down on the bank to eat a sandwich and try to get some information.  The good news was that there appeared to be three fish rising in the pool.  The bad news was that they were rising very infrequently.

Belly full, I came up with a plan to approach each riser.  I worked through two different small Blue-Winged Olive patterns without success, eventually sizing down to a tiny BWO parachute.  That did the trick, and a fish on the far bank gulped down my fly like it was a natural.

I was surprised at the size of it; after a brief fight, the hefty rainbow was too big for the small net I had brought.  I rested the pool, happy to be getting back in the groove, and eventually missed two more takes before moving off downstream.

Here I found more sporadic risers in the flat water.  I played with several fish, missing some and landing others.  I certainly ended up pleased in passing the time catching big stocked rainbows on little dries, although I was also happy when I got to admire a colorful brookie of about seven inches up close.

The Swift River is such a unique resource to have in Massachusetts.   I’m always amazed at the clean and clear water every time I visit.  I don’t know if anglers always appreciate the scale of the engineering, planning, and sacrifice that occurred in creating the drinking water supply upstream, of which the Swift River fishery is a beautiful fringe benefit.  I hope so.  I hope all of those brookies continue to as well! 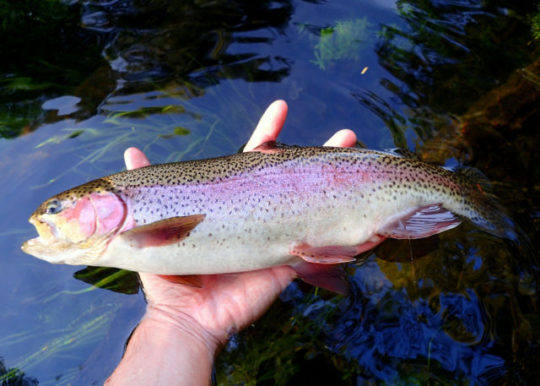 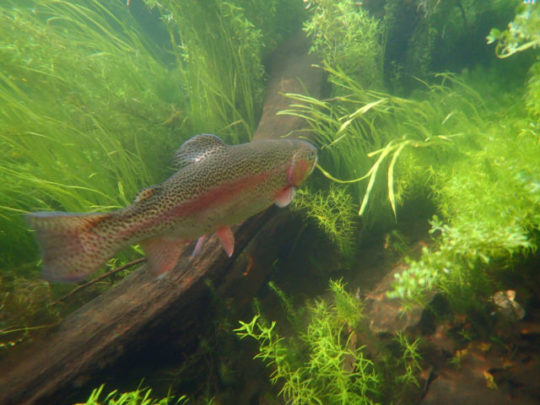 Quick sidebar into aquatic plants:  If you have fished the Swift below Route 9 you have almost surely noticed that bright green plant with club shaped leaves growing in the Swift.  You may even lost a fish or two when if they dive in there when hooked.  Ever wondered what it was?

It’s water starwort, or Callitriche, a small plant that can be found growing in lakes, ponds, and slow-moving portions of rivers.  It is common in Massachusetts and provides good fish habitat.  Its biggest claim to fame is that its flowers can be pollinated in the air by the wind, at the water surface, and even under water when submerged. 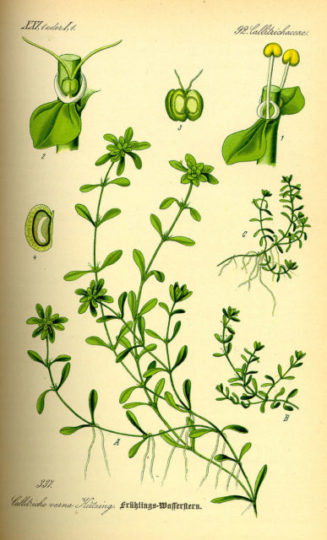 15 thoughts on “Fall on the Swift”