This post is a long time coming. With my hectic schedule this past week, I found no time to run this post until today.

I fished the Androscoggin last weekend with Matt and Pete. It was windy and clear, not a cloud in the sky. A beautiful fall day elsewhere, but so much brightness is far from ideal for this river (a prior outing here). As such, the fishing was tough. Stealth was needed to avoid throwing shadows on the fish. 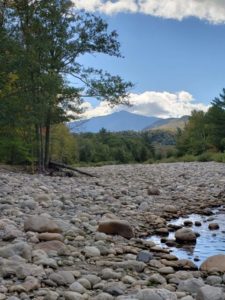 After two hours at a productive spot, we only had a few bumps to show. It was far from what we hoped, but with the sunny conditions, I reasoned that the fish would be in the faster water towards the middle of the river.

Remembering a lesson about fishing waters hit by relatively few anglers (post here), I waded out very carefully. Around my fifth drift, my indicator disappeared, and I tied into a nice bow.

A few casts later, my line tightened up and I pulled out a small wild bow. The action stayed fairly steady over the next couple hours. All of us either caught or hooked fish at this spot.

Overall, there was no secret fly. The expected Isonychia hatch never occurred, and there were a few random Midge, Mayfly, and Caddis hatches popping. As such, it was tough to narrow down fly selection, and I had to rotate patterns. 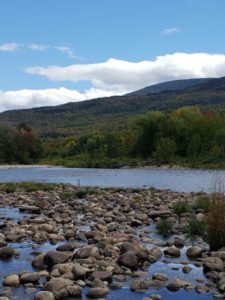 Later on, we decided to move to another spot where I’ve had success. The action slowed down greatly here.

Matt caught couple rainbows, a brookie, and a large fallfish. Between showing Pete a couple of spots and discovering (or feeling) a fairly significant leak in my waders, I only pulled in a baby smallmouth.

Leaky waders aside, it felt great to get back up north during the fall. I addressed the leaks since this trip and I fished with Geoff Klane this past weekend without incident.

I’ve said it before, and I’ll say it again. Fall is my favorite time to fish the North Country. I can’t wait to go back on my birthday weekend.

9 thoughts on “Fall on the Androscoggin”