I injured my hand almost two weeks ago now. As such, I had to cancel some fishing trips and focus more on recovery. Luckily, the turnaround time is six to eight weeks, meaning that I will fully recover by the end of summer.

Fortunately, I’ve had a great season so far, and it is far from over. Before my injury, however, I got a few chances to fish for my favorite summertime target: wild mountain stream brookies. 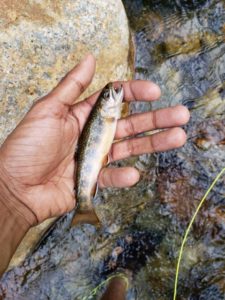 My last couple of trips up to the mountains were solid, but not spectacular. In fact, by a stroke of bad luck, I fished during sub-optimal, post-frontal conditions both times. As such, the fish were hunkered down.

The majority of them took nymphs. I fished a variety of ways, including tightlining, dry dropper, and even indicators to target deeper pools.

I got very few looks on dries, which was very unusual considering the opportunistic nature of these fish.

The low water also warranted a number of considerations. First off, there were fewer holding areas. With this in mind, I cherry picked my spots. I skipped a lot of water and focused on areas with good depth, current, and cover like rocks and wood. Ultimately, it became pretty easy to dial the fish in once I found what worked.

Second, fish were spooky, and I had to change my approach. Long line nymphing with a sighter and dry dropper worked best since it allowed for a more stealthy approach.

Damaging storms last fall did a number to the streams in the Mount Washington Valley, too. Massive boulders were shifted, wooden habitat was destroyed, and banks completely eroded.

However, at the same time the floods also created new habitat. Previously barren areas got a huge facelift, as the water gouged out new holes and deposited more debris into the water.

As a result, even familiar stretches looked and fished completely different. This posed some initial challenges, but ultimately the fish didn’t mind.

3 thoughts on “The White Mountains and Brook Trout”