Montana is, I think, on every fly fisherman’s bucket list, or as I learned on this trip, for some, it is an annual pilgrimage.

Life in the past five years has been a roller coaster, with getting out of the military, starting a new career, and having two new additions to the family.

With things finally settled down for 2018, I was able to plan a trip away to Montana with my best friend, and we decided on chasing the salmon fly hatch on the Madison River as the goal. 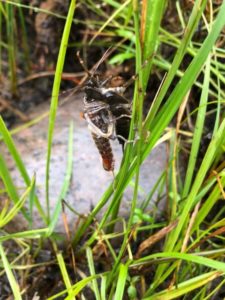 We decided to go big or go home, so we booked three days in a driftboat with a guide from Kelly Galloup’s Slide Inn and got a small cabin rental in the town of Ennis.

First of all, the town of Ennis was a very cool little town and much more developed than I had anticipated.  It appears that the popularity of Big Sky has turned the area along the Madison into a destination not just for fly fishermen.

The food in town was good, but if you go, I highly recommend a trip to two restaurants outside of town: the Grizzly Bar & Grill, which had the best ribs I have had outside of Memphis in my life, is on the upper section of Madison and McAllister Inn Steakhouse by Ennis Lake had the best service and panko-crusted walleye that was amazing.

We took a road trip to visit the Slide Inn and met Kelly Galloup.  It did not disappoint, and I think it is among my top-three fly shops that I have ever visited.

It became evident upon arrival why this place is called the Big Sky State.

Now, what everyone wants to know: How was the fishing?

Well, we got very lucky and caught the salmon fly hatch perfectly.  We spent three days throwing huge dry flies and landed a mixture of rainbows and brown trout.  I am usually a streamer and nymph guy, so I had a bit of adjustment on the first day, but ended up doing very well the 2nd and 3rd days.

My buddy Ryan got the biggest fish on the first day which was a 21″ brown trout on a salmon fly dry imitation.

The salmon flies are really cool and even a non-dry guy like me was enamored with observing and fishing the hatch.  These are definitely the biggest bugs I have ever seen, and it gets big fish looking up.

However, there were a lot of other hatches going on at the same time including yellow sallies, golden stones, and multiple caddis species.

The last day was the longest and most prolific multi-species hatch I have ever seen in my life.

I lost two browns that will haunt me for a while, but those kind of mistakes come from usually fishing 20 lb. tippet for stripers and being rusty fishing 5x.  I did end up connecting with my personal best brown trout on a dry fly, so it was a very successful trip.

The one thing that I realized on this trip is how spoiled we are in Massachusetts.  I have caught more 20″ freestone brown trout fishing with the Harrison Brothers on eight trips to Western Mass. than I have on 16 days of guided fishing in Wyoming and Montana.

The Deerfield has produced my biggest non-lake-run fish at 25″ (not on a dry fly), and it has very few other fishermen in comparison to the Madison River.

But, I can definitely say the hatches on the Madison were the most intense and interesting I have ever seen, so I can understand why dry fly nuts flock there. 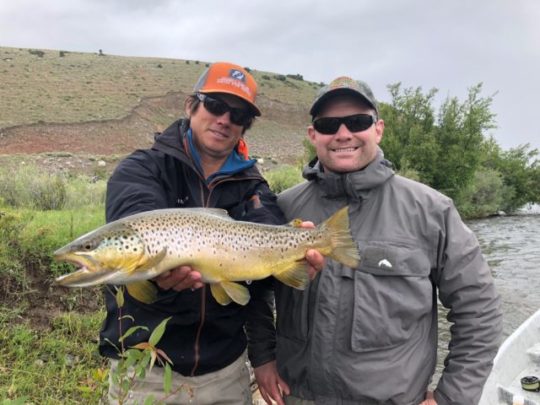 There were a few surprises on this trip that did not meet my expectations.  First of all, while it looks very western and remote, the proximity to Bozeman makes weekends on this river feel like an urban fishery.  I did not expect to see the same amount of driftboat traffic as one would see on the Delaware, but Saturday’s trip it came very close to that.

Secondly, these fish are more educated than I expected and a lot of poor handling by fishermen had left fish with lost jaws and deformities.

All in all, it was a great trip that was iconic, hitting all the boxes for trout fly fishing, but I think my next big trip is going back to my roots as a big game guy and either chasing pelagic fish on the fly or going after a river monster in the Amazon.

2 thoughts on “First Trip to Montana”