Friday emerged sunny and clear, a welcome change from the recent rain and cold. We again fished the Trophy Stretch. The water warmed up a tick, bugs were popping, and the fish were eager.

The highlight of the trip emerged, at last. The rod bent suddenly, and something very powerful took off. As a father, I was tempted to give my daughter coaching advice or offer to help net the fish.

I just watched and bit my tongue. Win, lose or draw, this was her fish.

She efficiently played the wriggling critter. My daughter knows how to use side pressure to ease the fish above her, while moving her feet, if she can. Once she has leverage, she knows how to ease it into calmer water. Soon, the fish tired and slid into the net. Hooray! 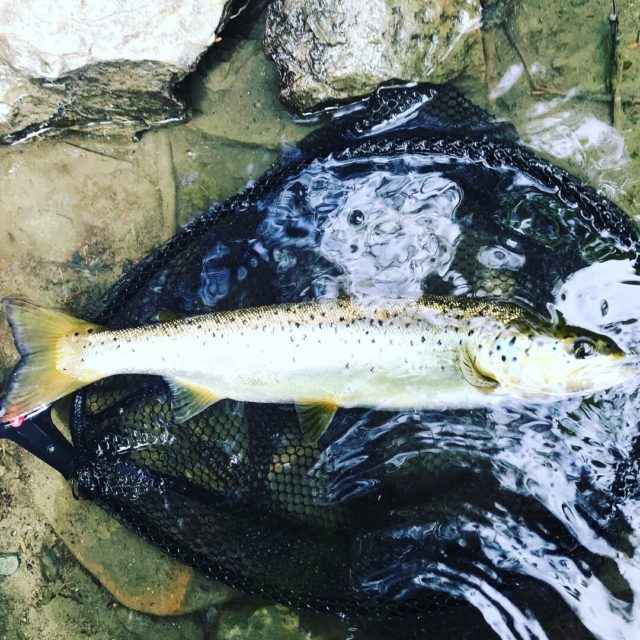 It was the fish for which we had been waiting: a wild and beautiful landlocked Atlantic salmon. It taped at 16″ and was a brute of a creature.

Two casts later, the rod bent again. Another powerful fish was on. It jumped twice, and I again didn’t offer any advice. Another salmon! This one was 15″.

Thereafter, an assortment of rainbows, some good-sized. It really was rewarding to watch one of your children successfully hook, play and land large fish.

We heard rustling behind us. An angler appeared and started to wade in without saying anything. I tried to be polite. “Hi there. So, you’re going to fish above us?” He was non-committal but kept wading in.

We were being front-ended.

I told him we were going to keep fishing the back end of the run. I took a few steps above my daughter to establish a DMZ. I decided not to be more aggressive. We were having a great morning, with about a dozen fish. I told my daughter we should take the high road and share the run. “Let’s not be greedy.”

Sadly, there have been many reports of bad etiquette from the lodge owner and local guides (post here). Some longtime lodge guests are reporting an unusual uptick in bad behavior this season.

In the end, river karma intervened. The other angler caught some dinks. My daughter landed more big fish. I chuckled.

It takes stones or unawareness to move in on a father guiding his daughter. All of us, of course, have been guilty of crowding others. When in doubt, perhaps, consider this line: “Hey, there. Mind if I fish above you?”

We fished some more, and the hot sun really sapped our strength. So, we broke for lunch. It was a great morning. My daughter was all smiles as she recounted the fish she had caught.

After, we decided to mix it up and chase smallmouth bass at Back Lake. If you fish the rocky area opposite Tall Timber, you can catch dozens of them. They were not big, but after some tough wading, it was a nice way to fish and enjoy the sun.

Later, it was prime rib for dinner, a Friday night splurge. What a great day, one for the ages.