There are many reasons to fish. Friendship is one of them. Many of the blog crew met up on Saturday to fish the Farmington, thanks to Joe Drake and Jamie Carr.

I’ll start with my notes. Many of the other anglers also have jotted their observations, if you scroll below.

Joe, Ashu Rao and I met up at dawn. We started at a stretch that Andy Lyons recommended. I got there early to scout it and offered to the guys where I thought trout might be holding. Jamie joined us thereafter.

We said our hellos, many for the first time. Then, we got to position. Everyone fished on their own terms: Jamie and Ashu had on indicators, Joe fished streamers and wets, and I tightlined. 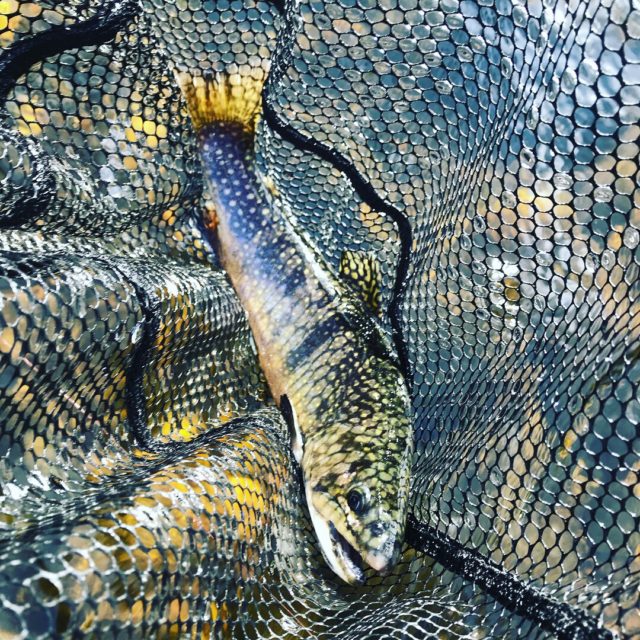 I was massively relieved when people caught fish at the first spot. Whew!

While the river is loaded with trout right now, the day was not “lights out.” Damon Matus later met up with us, and he had fished the day before, catching dozens.

“What a difference a day makes,” he said. A cold snap had moved in the prior night, and it affected the bite.

We then all moved to a new stretch. Damon was the source. I asked him if it was OK if we took the group to an area about which he had told me a few weeks ago. As I’ve written before, if someone shares a spot or a fly that is new to me, I don’t share it with others, unless he/she gives the green light. Many people are protective of their favorite spots and patterns, and so, I’m grateful to Damon for giving the OK.

For me, tightlining continued to work, but I also dabbed a Caddis dry up top. There were no rises, but I wanted to trigger a reaction. Went zero-for-three, but had a bunch of laughs splitting water with Jamie.

Again, we all landed fish, and the day started to go by quickly.

We went to the Better Half Bistro to take a much-needed break and had more laughs. Joe generously provided some beer.

I took a pass, as I was dragging at that point after just three hours of sleep. We had a family birthday party the night before, and I stayed up late to help with the clean-up.

Also, I wanted the guys, some new to the river, to have a great shot at fish before the crowds descended. That meant being at the river at dawn and a 2:45 am alarm for me. But, it was all worth it as I sat there at lunch.

When Andy called to tell us the Hendrickson hatch was on, we hustled over to a new spot with tricky wading. It is not the best one, but I figured it wouldn’t be as crowded. Fortunately, we did have the area to ourselves.

I dead-drifted at a deep tail out and had a few. Ashu landed good fish while nymphing and up top. He then generously split water with Jamie.

Joe and Jamie did yeoman’s work, casting dries amid tricky currents and with no back-casting space.  Plus, they had to reach a long distance, straight across to the other bank, over multiple current seams. Brutal target zone. After an hour of casting, they connected and had a double going. We all whooped with joy for them!

Andy met up with us and effectively ran a dry-fly clinic. He is an amazing caster! That guy knows how to nymph and catch up top. 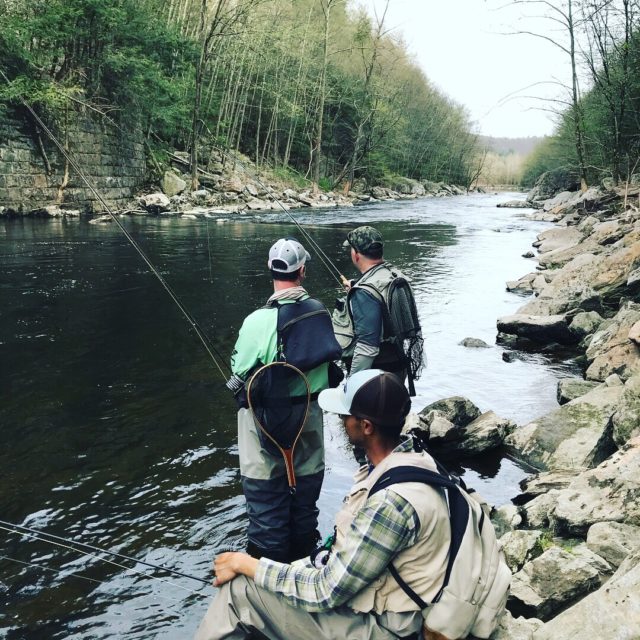 With my energy gone, I then said goodbye. Joe had to go, too. Ashu and Jamie were staying over and later fished the spinner fall.

When I got home, I told my wife how much fun it was to hang out with the guys. Everyone was so chill and generous.

I’m grateful for this blog for many reasons, and one of them is the friendships it has provided. It was a tiring day but rewarding for so many reasons.

Thanks for a great day, guys! We now are friends for life. 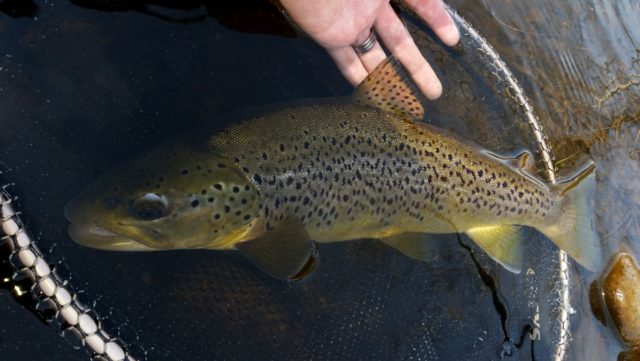 Started nymphing around noon and caught fish everywhere I set up. Best pattern was a #16 Hare’s Ear Caddis, but caught fish on several patterns. At 2:30 pm, I saw the hatch starting in Canton, so, I moved over to dries. Where I was, the hatch was light and featured no steady risers. But, the risers I did spot and target I caught, and so, that was pretty cool. Lots of fish in the net, including some absolutely perfect specimens.

From Ashu:
Got an early start. Despite the cold and windy start, the fishing far surpassed my expectations. Although the anticipated spinner fall did not happen until later on in the day, small black Stoneflies and Midges came off strong.

My most productive patterns before lunch were small Pheasant Tails and hot-spot Midges. At the first spot, I caught a mix of Rainbow Trout, Survivor Strain Browns, and a single Salmon parr. Further downstream, I even got into some wild browns, all on nymphs and many on the rise.

After lunch, rises became more frequent but still fairly sporadic. A couple anglers even told us we missed the spinner fall. However, we caught a few on a mix of dries and nymphs.

By 4 pm, strong Black Caddis activity came on, and we had frequent rises. I caught one brookie and Joe Drake and Jamie Carr doubled up on wild browns. Soon after, Andy Lyons joined in, and we all caught fish before saying our goodbyes.

Jamie and I stayed well into the late evening for the anticipated spinner fall. Despite the sheer number of rising fish, the fishing was quite technical. I had several splashy refusals and rotated flies several times. It was actually quite frustrating.

Finally, I got takes by shortening my drifts. I went four-for-five, mostly Browns and a lone Rainbow. The Browns ran on the larger side, and I caught two above 16″. Unfortunately, my phone ran out of battery, so I couldn’t take any photos. To be honest, just being in the moment was enough to make the trip worth it.

Overall, my first impression of the Farmington was favorable. Despite the angling pressure and the crowds, we found space and willing fish. The scenery was quite spectacular, and the river itself fished like my home rivers.

After an unexpected fishing date with my wife on Friday, I got to meet up with the blog crew on Saturday morning. I had an absolute blast and made some great new friends with whom I can’t wait to fish again.

Here’s what I learned.

I’m almost half as good an angler as Jo on two hours of sleep. Joe D. was the coolest guy on the water, and I tip my cap; he, perhaps, is taller and more gangly than me, a difficult feat.

Damon is a straight up fish hawk, and, after dispensing some helpful advice based on all the fish he caught, he got right down to business.

If I fished with Andy some more, I might occasionally net more fish than him, particularly if I can capitalize on days when he is hung over or has pinkeye, a sore elbow, or a loss of feeling in his hands.

As for Ashu, I managed to fish for almost 14 hours on Saturday (although that included a lunch-and-beer break), and he spent more time on the water than I did! He’s the type of guy who would offer to give you his last spinner during an intense spinner fall with fish rising all around. What more can you say about an angler than that.

Looking forward to more time on the water with these guys!

From Joe:
The drive from Amherst took about an hour-point-five, and, as such, I woke up just before. Having spent little time in CT outside of the IKEA, downtown New Haven and the I-84 corridor, this drive turned my notions of what the state had to offer (which is a lot, apparently). It was pretty on the way down and even prettier one the way back after a great day of fishing. 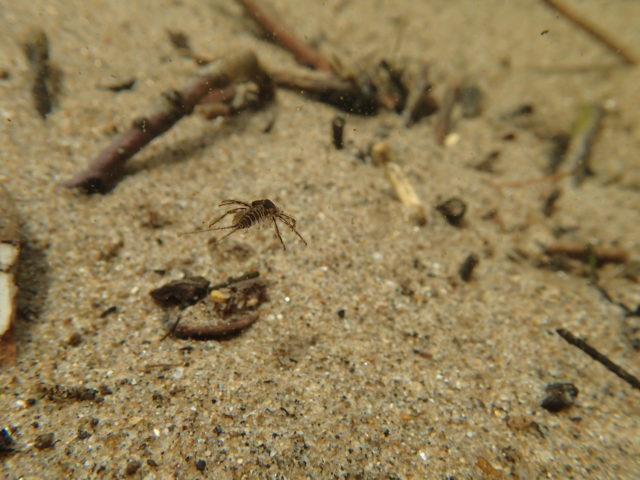 I met up with them on the river, and, as I was still coffee-deprived (I had only three cups), I decided to swing mini-meat and micro-meat instead of having to focus on the nuances of tightlining.

When it’s cold and the water is fairly swift, I like to put a small weighted Leech or Sculpin streamer on and then put a soft hackle as a dropper fly. It was supposed to be Hendrickson season, so I choose a hackle that was tied with woodcock and orange thread for the right colors. 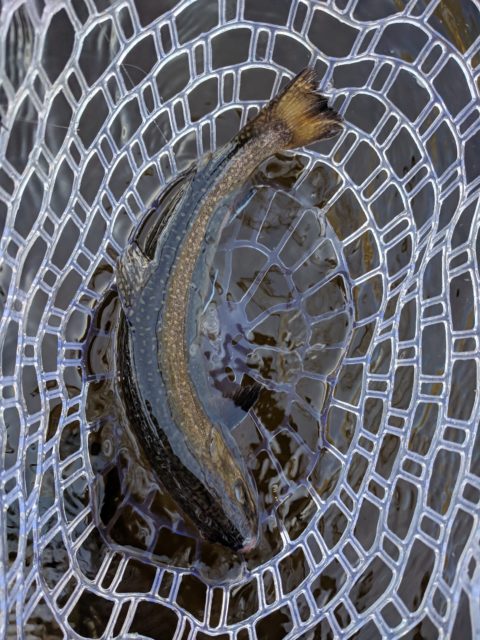 I like to chuck this rig into a seam just upstream of my position and let it drift. Sometimes, I will let out another 10 to 20 feet of line to let it keep tumbling in the current before I let it swing. Then, I short-strip it in to finish the sequence. This is the tactic that worked for me for the better part of the day.

Although I did try dry-dropper rigs and some other flies, I caught all but my last fish on this set up. Three browns and a brookie all came on the soft hackle in addition to several misses. One fish threw my rig when it wallowed, and it had a side easily a hand-and-a-half wide (my new white whale).

To round it out, near the end of the day, a bunch of small Caddis and some Hendricksons were causing a couple to rise in some nasty currents. It took about an hour of roll-casting and fly changes to get the sequence right: a gunked up X-Caddis with dark CDC and orange thread all the way to the far side of the river.

It was worth the wait as that fish was my best of the day.

15 thoughts on “Our Blog Team Outing”