I visited a local small stream briefly. The water was a tad high and cold when I got there. In addition, it was pouring rain and showed little signs of letting up.

Needless to say, I had low expectations.

The first few pools produced no action on my dry-dropper rig. Further upstream, I found a nice undercut with a fast cascade at the head. On my fifth cast, my dry disappeared violently.

I lifted, saw the flash, and it popped off. A few casts later, I saw a nice fish come up for the dry. This time, I was ready and after a good fight, a six-inch brookie slid into my net.

Unfortunately, my phone didn’t cooperate due to the combination of the rain and cold weather. Not wanting to stress the fish out, I quickly released it. 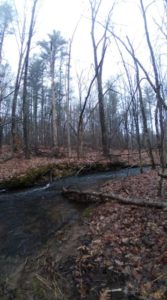 Working upstream, I found more willing fish. Most took the dropper, but a couple more came up for the dry.

Overall, I went four-for-nine. What the fish lacked in size, they more than made up for it with sheer beauty.

Unfortunately, my phone issues got worse as the day went on, and I only captured one fish photo before the battery died. It was an absolute beauty with some of the reddest fins I’ve ever seen on a brook trout. 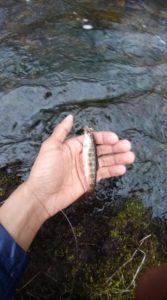 Eventually, a change in weather slowed down the bite and I called it an evening. All considered, it was a successful early season outing, and it felt great to get my first dry-fly fish of 2018. 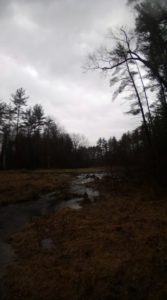