It’s a First World Problem, I know, but, it was six weeks with no fishing.

You too may know the feeling and the circumstances: a bit of Angler’s Ennui as holiday, family and work obligations filled the calendar. And, the Arctic freeze didn’t help.

Don’t get me wrong. It is good to be involved with work and family. However, there is a deep and sonorous joy about being on the water. When it isn’t there, something feels amiss.

With the weather looking decent this weekend, I did everything humanly possible to carve out some fishing time. At the very last-minute, I was able to fish the Swift on Saturday morning. I connected with Alex Bagdonas, a bonafide Swift River Fish Hawk, for advice. I tied up one of his magical flies, too.

I decided to indicator-nymph, which I’ve not done in a long, long time. I figured dries-or-die would be a fool’s errand. I brought with me my H2 0904 pre-rigged with my indicator-nymphing set-up: a 5x leader cut back a few feet, a tippet ring and 6x fluorocarbon. A New Zealand strike indicator (link here) completed the rig.

With a sense of excitement, I drove to the river. I pulled into the dirt lot while it was still dark. As I walked to the water, soft light started to illuminate the area. The water was a cool 37 °F, and the air was about 25 °F. 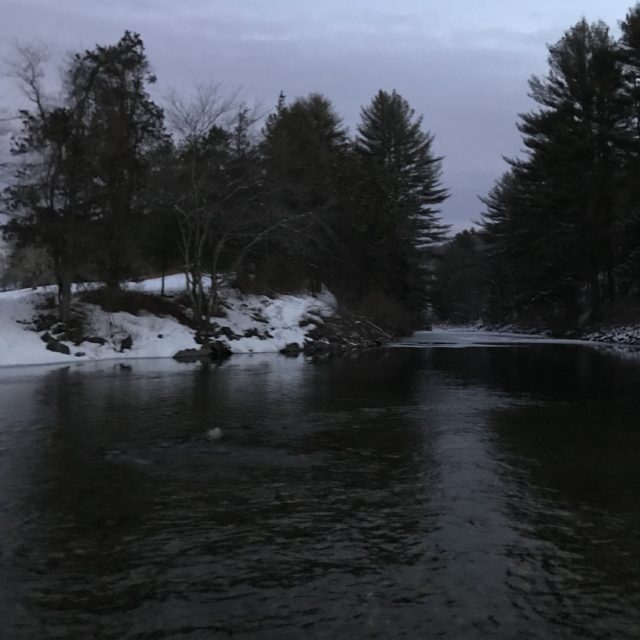 Thankfully, the skunk came off pretty quick. A feisty rainbow took my imitation of Alex’s nymph, and I was off to the races. Three strong runs. 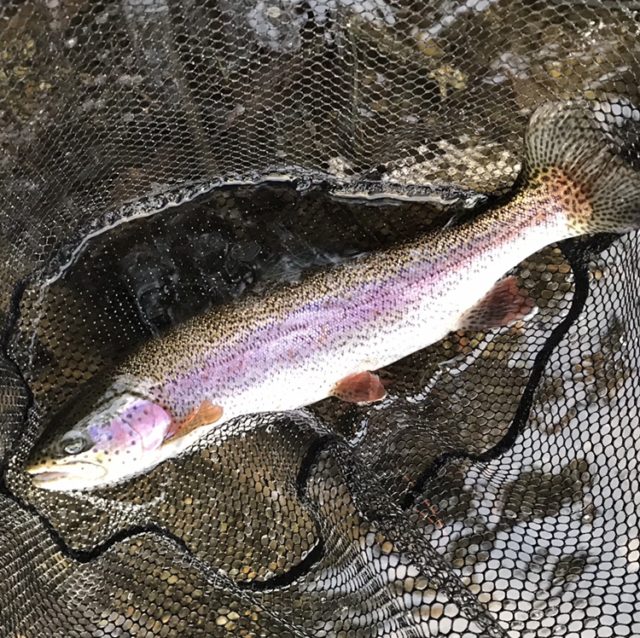 The fish was gorgeous. Maybe 16″? The photo isn’t the best, as I wanted to keep the fish fully submerged as much as possible (cold air freezes gills). So, after a quick snap, I tipped the net and said goodbye.

Amazingly, a few casts later, the wool indicator disappeared again, and I gently set the hook. Another fish flopped into the net. A good-sized rainbow. 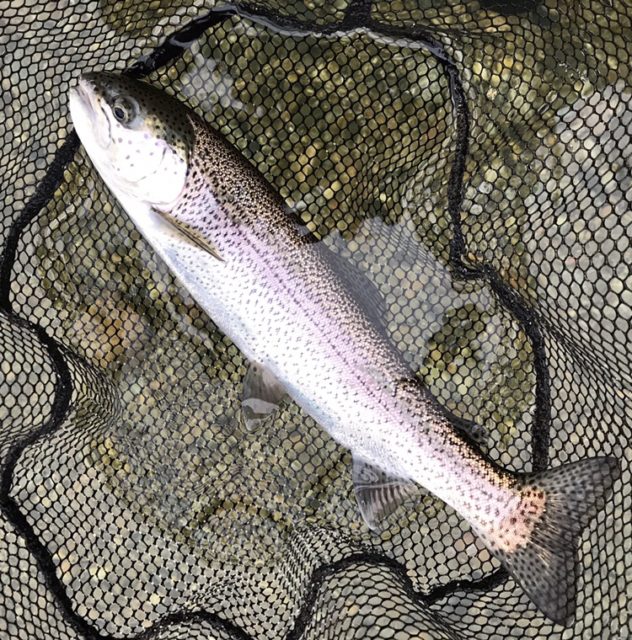 By this time, the area was packed with anglers. More and more came in the coming hours. My feet started to really freeze up. But, it was fun, as other anglers were very friendly, and we often chatted with each other. I met some great guys.

The action was very slow for all.

Suddenly, I heard a familiar voice. It was Alex! Great timing. We chatted for a bit, and it was fun to shoot the breeze, compare notes and watch him fish. Of course, he immediately landed a big trout.

It also was good timing to yield my spot, as the two fish already made me happy, and I needed to get out of the water to warm up my feet. I moved to a different spot.

Later, when the sun’s angle was right, I could see a group of fish lying still in flat water. They weren’t cruising. They seemed to be in suspended animation.

I decided to experiment. Why not? I threw some big dries to see if that would wake up the fish. Nope.

I then decided to fling some new streamers. They ignored all of them until I put on a black one (link here to the pattern). That did it. I got quite a few follows.

One fish was on but dropped in a few seconds. I missed another five takes, as the fish would quickly spit out the streamer faster than I could strip-set. Those Swift rainbows are quick!

Eventually, one was hooked and stayed on. Thankfully, I landed it.

With noon approaching and domestic obligations looming, I reeled up and sauntered back to the car. It was a satisfying day. I saw some trout, made some new friends, and gave away some flies. Two new homemade flies took some fish, and I felt very, very satisfied.

A happy morning. It made me realize that I should never take for granted fly fishing. It made me more grateful for these magical rivers. Freestones have existed for millenia, and both they and tailwaters will outlast us all.

They truly are timeless treasures.