Sometimes, I decide to fish but am not sure where. I just drive. 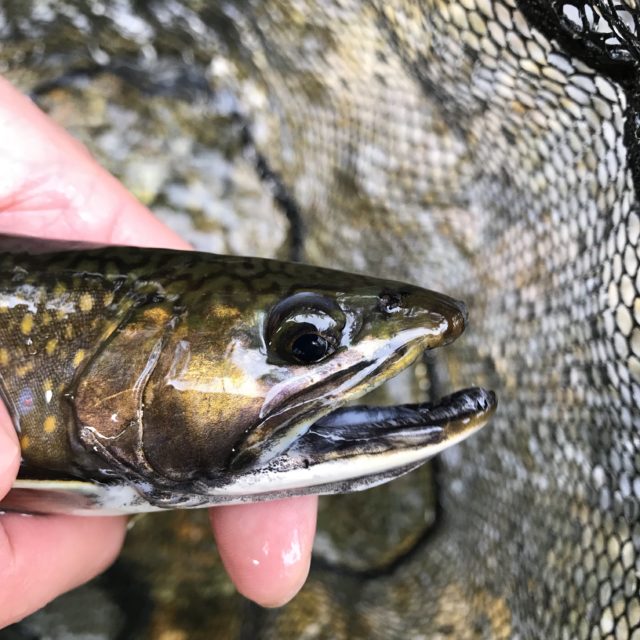 On Saturday, I left the house before dawn with multiple fly rods in the car. I wasn’t sure if I would go to the Farmington or the Swift and, instead, just drove west. I do that sometimes.

I wait and see which river calls to me.

Along the way, I listened to podcasts and eyed the few cars that were on the road. All felt calm and quiet.

I decided to re-visit the Swift Hatchery Pipe Toilet Bowl area (guide here). I didn’t want to drive the four hours to and from the Farmington, and the idea of throwing small dries sounded appealing. I also wanted to get my turns in before “catch and keep” returns on January 1 and the rainbows are pretty wiped out.

After the highway exit, I made a quick stop at The Golden Arches for breakfast and then headed to the river. There was a surprising amount of car activity, as hunters started to gather.

The water was a brisk 44 °F, and the early signs of a cold front were in the air. Everything looked and felt grey.

Action was very slow in the morning, which was expected. I hung in there with “dries or die.” It wasn’t that busy. I think the word is out that the spawn is over and that the fishing is more challenging. Anglers came and went, but, I think the cold water and lack of takes discouraged many.

Conditions gradually picked up, and I started to land brookies (like the one up top) and ultimately caught quite a few. No monsters, but, many were still colored-up, and many were decent-sized.

Rises became consistent later in the day, as pellets started to wash down from the nearby hatchery. I looked for rainbows eating up top but didn’t see any. I continued to catch brookies and ended up with over a dozen, I think? Some guys nymphing with pellet flies started to catch fish, but not many.

I fished some experimental flies as well as some of the ol’ favorites. Size 30 CDC Emergers were the only dries that worked. At one point, I added 8x tippet to see if that would matter. It didn’t. So, I clipped it off and stuck to my usual 6x.

With the water so clear, it was fun to see the fish react to my flies and drifts. There were many refusals. Some would approach a fly but veer off at the last second. I’d see the rises, but they’d dodge bullets nearly every time. Splashy refusals.

Hopeful for a rainbow, I kept scanning the water. And, there, pretty far out, was a good-sized fish suspended in the water and gracefully turning its head back and forth and rising at times.

I decided to target that one fish.

It was a jaded customer, refusing to look at most of my dries and rarely finding one interesting enough to observe. When it did, it eyeballed the fly for a long, long time. I rotated through a bunch of dries. Sigh. I then did a second rotation of those same flies.

At long last, the fish was on.

The rainbow had some very powerful runs. I reeled in like a banshee after each one. I find you have a narrow window during which to claw back line before a fish catches it breath. Eventually, side pressure gave me the upper hand, and, after the fourth run, the fish slid into the net. 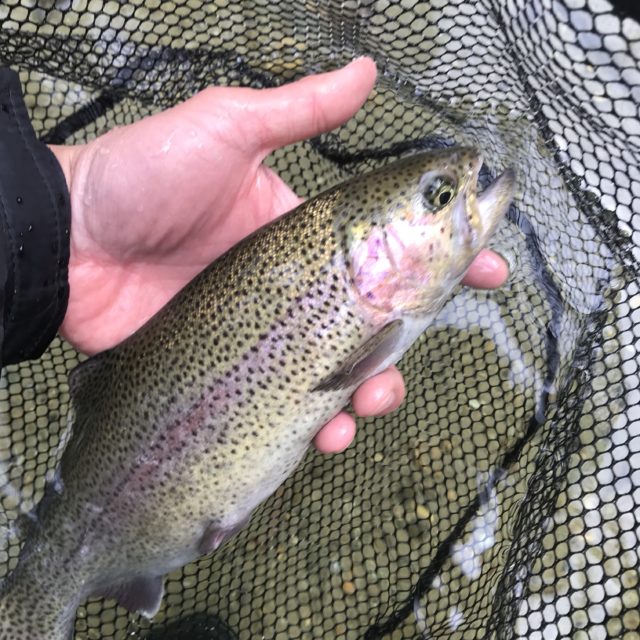 At about 15″, it wasn’t the biggest rainbow of the year for me. It wasn’t the prettiest. But, it was one of the most satisfying. I checked my phone. I had spent 45 minutes casting to that one fish!

After a quick photo, the rainbow darted off.

I stayed a bit longer, but I knew that was The Fish of the Day. Had a great time chatting again with Courtney Prestia. We’ve crossed paths a few times, including at a CT fly shop, if you can believe it. He showed me his new Thomas and Thomas Contact Nymphing Rod, which we both love.

Finally, the call of a warm car was too great to ignore. I reeled up, said goodbye to the others, and walked quickly back. My legs were so cold and stiff in spite of multiple layers underneath my waders.

We live in a truly unique nation. We have public water and don’t have to pay a landowner fees to fish, like they do in much of Europe. Amazing.

There truly is something special about targeting one fish with dries. I drove home a happy man.

8 thoughts on “The Fish of the Day”