First, the title of this post is actually a bit misleading. I didn’t even fish the Salmon River – more on that soon – but rather fished several other rivers and streams in the immediate vicinity of the Salmon River.

I had made one previous trip up to this area last year and was met with waist-deep snow and a lot of hard work to find fish. This year I made the trip up north several weeks earlier and experienced far different weather conditions (75 and sunny) and also found a lot more fish. The main difficulty I experienced this time around wasn’t weather or a lack of fish but pressure from other anglers. The place was an absolute zoo! I am not one to discourage anyone from fishing where and how they prefer but personally I don’t enjoy crowds for the most part. The fall run of salmon is an extremely popular fishery for all types of anglers and big fish in this type of setting sometimes brings the worst out in people. How this whole fishery came about is a very interesting story in its own right but that will have to wait.

I made the trip up a bit earlier this year anticipating that there would still be plenty of King Salmon in the rivers. I used to fish for salmon in Lake Michigan tributaries in eastern Wisconsin when I was younger. It’s a lot of fun to see, hook, and try to land such huge fish in relatively small rivers. Ultimately though salmon lose their novelty pretty quickly – sure they’re big and have the ability to fight like trucks but they aren’t actively feeding while in the rivers and sometimes their fight can be a little lackluster. There’s also a small part of me that feels guilty about pursuing salmon during their last weeks of life, catching them and sapping a little of the precious little energy they have left to complete their final act of passing on their genes. So, I catch a few and move on to more interesting and less depressing quarry like Steelhead and lake-run Brown Trout.

Even with the crowds I was able to find some solitude and unmolested fish. Very early in the morning was by far the best time. The fish had not been pressured all night and were far more willing to take a fly. As soon as they were pressured it became nearly impossible to coax a bite. I have a feeling that many of the salmon that are caught up here are snagged, whether on purpose or inadvertently. I know there were a few times that I accidentally snagged a big salmon as I drifted weighted nymphs and beads through a pod of fish stationed in a pool. Most the time though those fish came off pretty quick otherwise good luck landing a 20 pound salmon hooked in the tail. Photos of a few of my better salmon from the weekend: 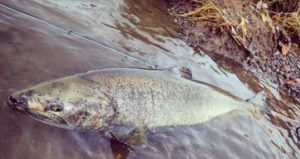 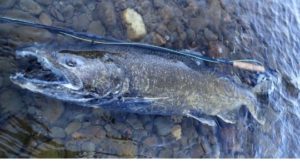 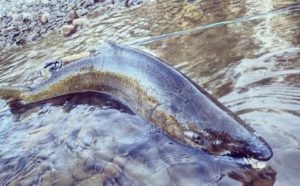 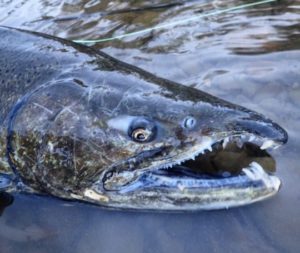 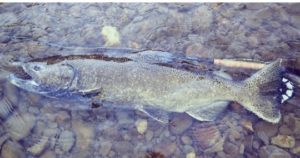 Once again I put on a lot of miles in the waders (a little over 16 in 2 days) to find solitude and unpressured fish. It was only partially successful. I’m not sure why I insist on covering water like I do. Maybe it’s my inherent restlessness or my incessant need to explore. Whatever it is, sometimes it works and sometimes it doesn’t. I do envy those anglers that can stake out a spot or two and meticulously fish all day and land tons of fish. I just can’t bring myself to do that.

I never did find a big lake-run brown like I was hoping for but I did catch a pretty decent steelie late on the last evening. 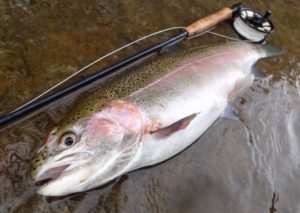 From what I’ve read and heard the steelhead season is just getting underway and now that I’ve explored a buch of new spots I might make the trip up again sometime this winter or, better yet, next spring. I’ll end with a couple photos of the rivers and the fall foliage is hard to beat. To be completely honest the area really reminds me of my home state of Wisconsin – lots of cornfields, dairy farms, hardwoods, and rolling terrain – beautiful country to be sure. 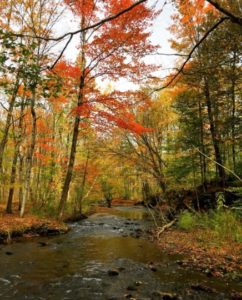 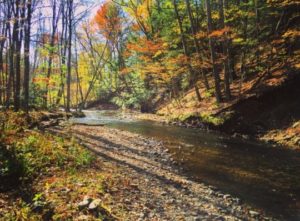 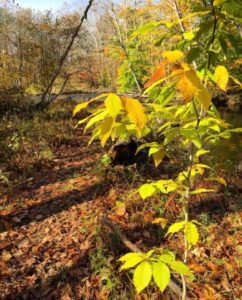 Hope everyone is having a good fall fishing season!