I fished all day Saturday. I was joined by my friend, Matt, who had never fished in the White Mountains so I was determined to put him on some fish. Instead of exploring like I have over the past 3 weeks, I decided to revisit some old haunts to see how they were still producing.

I met up with Matt at North Country Angler so that he could follow me out to the stream. I rigged up 2 fly rods and tied a number of pheasant tails and wooly buggers I was eager to test so needless to say, I gave my friend a hard time for bringing his spinning rod. Stream A produced right away with 2 brookies coming my way and several follows going Matt’s way. From then on, the fishing was surprisingly slow as the usual spots failed to produce the volume of fish that I’m accustomed to here. Matt continued to get follows but no hits. It was around this time that my friend told me that he should have fly fished, to which I replied “I told you so.” Eventually, the action picked right back up as we worked further upstream. Matt switched to fishing a panfish popper fly (still on a spinning rod) and started picking off fish regularly. We found some deeper holes in this section and it wasn’t long before we got into some solid fish between 6-10 in. Once we were satisfied with what we found, I suggested that we take a lunch break and try another stream for wild rainbows to change the pace. 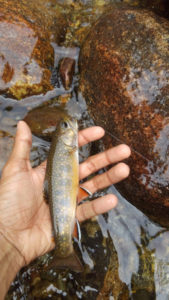 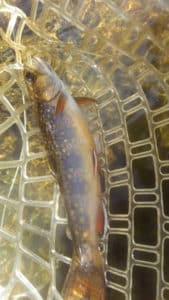 Stream B was shallower and less shaded so the fishing was challenging. I picked up only one brookie on a dry and missed a nice wild bow, but the action wasn’t great. The fish were sitting in the faster, broken water so it wasn’t long before I started nymphing. Over the next hour or so, I picked up several brookies and one stocked bow. I lost a few wild bows in the process. Matt was much more at home at this stream and he picked off brookies, bows, and a lone brown with ease. He lost a very nice wild bow as well. As we worked our way upstream, it got cloudier and surface action picked up again. I caught a few more wild brookies on dries while Matt took a 5 minute breather before we turned back. I was a bit flustered that we didn’t catch (or land) any wild bows, but all things considered, I was very satisfied with how well the day went. Once we made it back to the fly shop, we parted ways, already planning a return trip around Labor Day weekend. The hot flies for the day were pheasant tail nymphs and red wulff patterns. 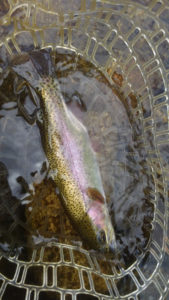 I hit Stream C alone on the way back home. It was a quick 20 minute pit stop at a promising road side pull off. I pulled out 5 brookies all on dries. It is amazing to see how productive the wild trout fishery is in the White Mountains. If priorities were shifted in Fish and Game’s stocking practices, we could have ourselves a little slice on Montana this side of the Mississippi.