I took advantage of a few days off from work to make another journey deep into the Great North Woods of Coos County. This time, my dad wanted to come along to experience the great fishing and spectacular views. Unfortunately, due to the conflicting events, my dad could only take off so many vacation days so we were limited to only two nights and one full day of fishing. Despite the extenuating circumstances surrounding this trip, it was one that I will not soon forget.

Since my dad had never fly fished before, I decided to hire a guide for a half day. For those of you who haven’t heard of Mickey Cunliffe, he is a fairly recent addition to the team of guides at Tall Timber Lodge. A New Hampshire native, Mickey has been fly fishing since the age of 10. Since graduating from the University of New Hampshire with a degree in Finance in 2014, he has taught in China for 3 years and travelled and fished around Asia, Australia, and Colorado before joining Tall Timber. If there was anyone who could put my dad on fish and help me forget my last brief trip to the trophy section, it was him.

Part One: The Guided Trip

Without going into too much detail, we fished the trophy section and some other lesser known sections of the Connecticut. The fishing was very good. I went 2 for 4 in the trophy section with a decent wild brown and salmon landed and two other salmon lost. My dad missed and lost a few fish and wound up with his first fish on a fly, a small wild salmon! It may not sound spectacular number wise but it was good considering I was fishing with a different style indicator and since we had to fidget a little with the weight before I was on the fish. It was interesting to see that many of the fish we hooked were in incredibly broken and fast water where dead drifting any offering would be incredibly tough. I guess that’s what fish do when they are vexed after seeing so many flies. Fortunately, even small changes like adding an additional split shot made a world of difference. In one pool, I may have made 20 drifts, thinking I was close to the bottom without so much as a strike. Normally, I would leave since I already had a lot of weight on but Mickey added some more and insisted that I try again. The next drift I made was sucked under violently and soon after, I admired a gorgeous wild brown. 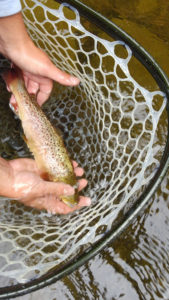 Shortly after releasing this fish, my dad hooked up with his first fish on a fly and I landed a strong wild specimen that jumped 5 times. 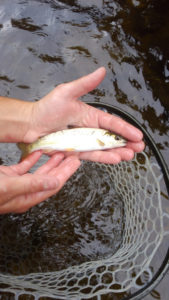 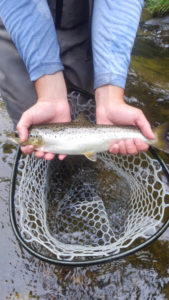 After this final fish, I asked Mickey about some other sections of the Connecticut that were worth exploring so we decided to pack up and hit those spots. Without going into too much detail, I’ll only allow that this section was in the Connecticut River proper and was upstream of the trophy section. Here, the fishing was spectacular, but the fish weren’t particularly large. I caught many fish on a EHC stimulator (a mix of wild salmon and brookies) but I did turn a much larger salmon, which popped off after a very brief struggle. My dad missed a couple nymphing but once I handed him my rod, he started catching them on dries. Meanwhile, Mickey handed me a streamer rod and I went to work. The action wasn’t as great as I expected it to be but I fooled a large native brookie on a little known retrieval technique, which made it all worth it. All in all, it was a spectacular morning all thanks to a great guide. If you plan on going up to Pittsburg, I highly suggest you consult him. 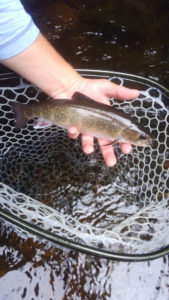 After a quick lunch and a couple hours of napping, I decided to return to the stream. This time, I went back to the wild fish stretch to explore some more water that we didn’t cover in the morning. My dad joined me briefly and I was glad that in the first section that we fished, I was able to give him a tutorial on how to dead drift and skitter caddis dry flies with willing participants (5 salmon and 1 brookie) coming to hand.

Unfortunately, my dad was feeling sore from the morning session and decided to buy some supplies from Treats and Treasures so I was on my own for a couple hours. The water was up from the morning session and it was much colder too so the fishing was greatly improved. Dries and nymphs both worked equally well but I stuck more to dries since the strikes were inevitable where the fish were. No monsters were caught on this trip but a couple of decent 10+ in. fish (one brookie and a couple salmon) were brought to hand. When I worked my way up to the section I hit in the morning, I ran into a few finicky fish (mostly brookies) but subtle changes in presentation would help change their minds.

In one run, I made an upstream presentation that got refused almost immediately and ignored entirely during the subsequent attempts. As I moved upstream, I approached it from the side and suddenly caught 3 fish on consecutive casts! I didn’t have to change flies or make any drastic changes to my set up; all I had to do was switch angles! The more finicky salmon seemed to like the fly presented downstream and skittered up. It definitely made for some exciting dry fly takes. 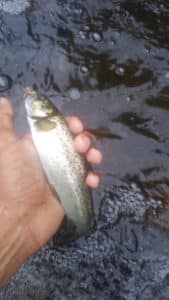 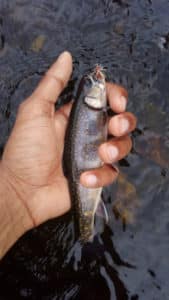 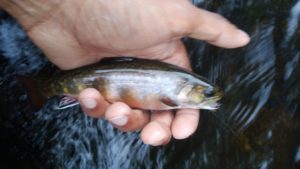 After this fish, I decided to call it quits and head back to the parking lot. On the way, I met some very nice anglers who reported decent dry fly action on the Trophy stretch. For dinner that night, we ate at the Rainbow Grille. For great food, great service, and the ambiance on being out on Back Lake, you simply can’t beat it.

Yes, all good things must end. Neither of us got very good sleep that night due to the humidity of the air and the lack of air conditioning. My dad was up around 3 and I “slept in” until 6:50 am. I was intent on hitting the trophy section but seeing as to how tired my dad was and knowing how long of a drive we had left, I decided against it having already fished heavily the previous day and feeling quite tired myself. We made a couple stops at the Lopstick Fly Shop and Treats and Treasures before we embarked on our long journey south. All in all, it was a great trip and a great way to get away from the tedium of everyday life. We’ve already decided to make this an annual tradition. 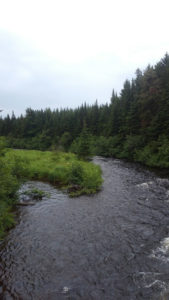