I fished the Swift River C&R section downstream from Route 9 this Saturday. I was scheduled to be in Amherst for work all day on Friday so I decided to just stay overnight and fish on Saturday. Unfortunately for me (but great for the rivers!) there had been an exceptional amount of rain earlier in the week and most of the rivers I wanted to fish were still pretty much blown out according to the USGS gauges. That being the case I decided to fish the Swift. I’ll be the first to say that Saturdays on the Swift are not my idea of a good time but I was able to carve out a little stretch of river all to myself. In fact, I’ve fished this exact same 100 yard section several times and have never seen anyone else fish it. Don’t know why.

I did pretty well overall. Still no browns but I managed to land 6 or 7 good rainbows and a couple decent brookies. The rainbows were being super aggressive with each other but it wasn’t translating to any catching on my part. At least not in the shallows. I really only picked up fish in the deeper water below the gravel. Up in the shallow gravel bars there were big fish chasing each other all over, digging redds, etc. Basically going through all the motions attempting to spawn. Some of the males were pretty ripe, releasing milt when I was unhooking them. However, the couple hens I caught had no eggs. There may have been some ripe females in the bunch but I didn’t hook any. Could be they were staying up on the gravel. Still, I don’t really know how successful these fish can realistically be reproducing in the wild. The brookies were mixed in with the rainbows and seemed to be more aggressively feeding rather than spawning. They were still colorful but not as much as a few weeks ago. Maybe the brookies are finishing up the spawn in certain parts of the Swift and transitioning into postspawn feeding binge. I was surprised how difficult it was to spot the brook trout – they really blend in even though they seemed to be much darker than the substrate. Once I concentrated hard enough though I could start to pick them out from amongst the significantly larger rainbows.

I tried all manner of beads, streamers, and standard nymphs to no avail. I did much better on “egg-sucking” type flies. Small egg-sucking prince nymphs with a hot orange bead seemed to be the ticket. I even had one of the rainbows wedge his face in between two rocks, where my nymph was lodged, trying to get at it! He wasn’t able to fit his fat head in there but once I pulled free and cast again he ate it right off. See photos below: 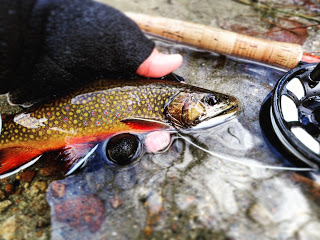 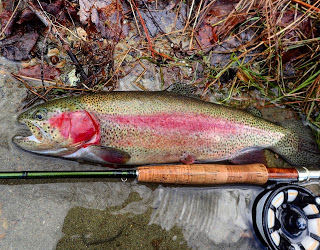 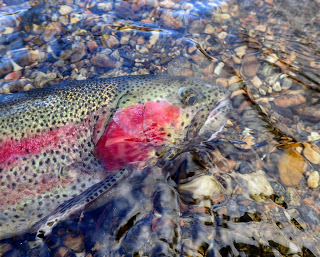 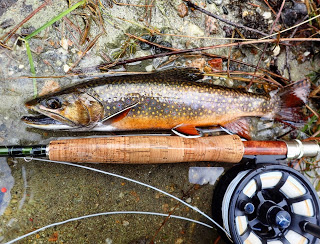 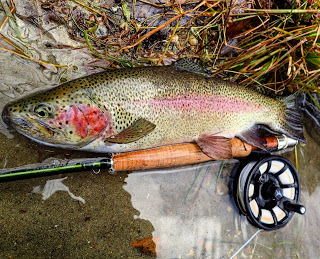 Did anyone else get out this weekend? How did you do?