Oh man, I though August was busy but my September was absolutely insane. No time to even think about fishing let alone actually go fishing. First I visited friends out of town for labor day, then spent a week on Martha’s Vineyard for work (to be honest I got a bit of fishing in on the Vineyard but had no time to post about it!), immediately moved into a new apartment when I got back, a day later traveled to northern CA to be a groomsman in a friend’s wedding…and this was on top of August and September also being two of my busiest months at work! So please forgive me for neglecting timely blog posts.

I rarely go more than a week or so without fishing so this past month or so has been pretty tough mentally.  This weekend I finally got to head out to the Deerfield after my long, somewhat self-imposed hiatus and proceeded to get completely skunked. The trees are starting to change and the river is quite striking, especially now that the hordes of tubers and rafters have gone. To be honest I haven’t done a lot of fall fishing in my lifetime. I usually devote a few days to it here and there but traditionally the fall meant hunting season. I don’t think I’ll be doing that much hunting this year – at least not during the fall. I haven’t had time to line up any spots for bowhunting this year and I’ll probably wait until late season to really hammer the rivers for ducks. My fall trout fishing strategy has remained relatively unchanged over the years, for better or worse. I almost exclusively fish big streamers. This means that I often go home skunked but when I do hook up it’s more than likely going to be a good fish.

I had one pretty good brown swipe at my streamer as I swung it through a bouldery run but that was about it for action. I talked to an old timer right as I was leaving to head home today. He was very pleased and told me all about how he had hooked a few nice stocked rainbows in the riffle he was fishing. I was so obsessed with dredging up a big brown that I didn’t even think about the possibility of finding these freshly stocked rainbows in some different habitat. Maybe next time. Now that my busy season at work is starting to wind down I plan on chasing big trout and landlocked salmon (when they start their spawning runs in a month or so) all over the place until the hunting itch becomes too unbearable not to scratch.

How is the fall season shaping up for everyone else?

I’ll end with a few pics of the Deerfield from this weekend.  Too bad they aren’t of trout… 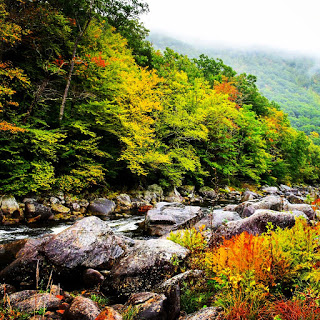 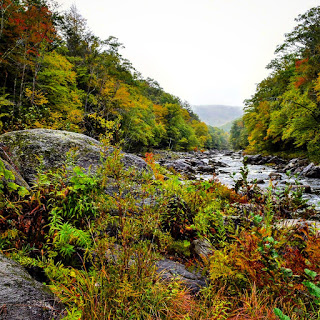 6 thoughts on “The start of my fall fishing – first stop, the Deerfield”