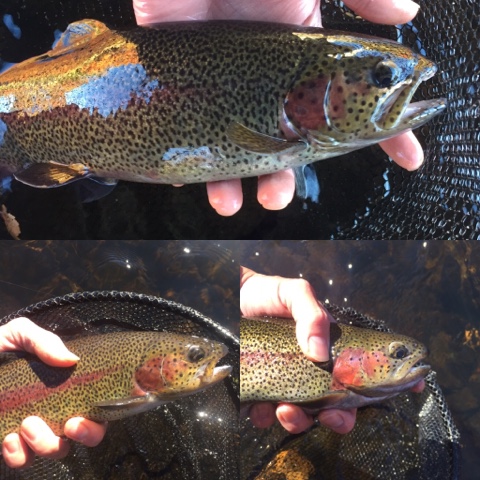 I spent two half-days fishing the Millers. The river is at a decent level, and loads of fish were around, both newly-stocked and ones that survived the summer.

I landed dozens each time. It was particularly fun to see some very dark rainbows. I wonder how long it takes for trout to shed their silvery fresh-from-the hatchery look. Some of the rainbows were quite hefty and the browns were about 10″ or so.

It was refreshing to swing streamers. Swinging soft hackles also worked. And, I also tightlined the usual small flies. My last few fish were caught while throw dry-droppers over riffles. Bugs started popping in earnest around 12 noon, and so, I don’t think there’s a rush to get on the water.

Small and very lightly-weighted streamers worked well. When bugs started to get active, #20 Hare’s Ears and soft hackles did well, both on a dead drift and on a rise after the drift. Small nymphs with chartreuse also rocked, which made sense when I stomach pumped one larger fish and saw green Caddis pupae.

A spin fisherman before dawn did well throwing a tremendously big lure (thunk, flop, splash, etc.). Rapala artillery. Then, when the sun rose, the trout wouldn’t take his lure. The fly anglers caught fish all day, switching flies and methods. I think repeatedly throwing a heavy lure will quickly give trout lockjaw and spook a run/pool. Made me grateful that I learned how to fly fish.

It was good to meet Alex from Boston and an angler from Manchester, NH. Gave Alex some of my flies and was glad to pay it forward. Shared with him my thoughts on why tightlining is a great way to fly fish. At one point, the method let me catch fish every second or third cast.

Alex, call Grady or Torrey at UpCountry. They’re tightlining experts. They have a great Euro-nymphing outfit on their web site (link here). They’ve tested all the Euro rods and recommend the Redington Hydrogen if you’re looking for something that won’t kill the budget.