The weather was great this weekend and, given the cooler temperatures the last couple weeks together with the recent trout stocking, the fishing was excellent as well. I thought about checking out a whole number of different rivers but settled on the Quabog near Palmer. I figured with the nice weather that the more popular rivers would be a bit crowded for my tastes. I was working over by the Miller’s late last week and even on a weekday most of the pull-outs and bridge crossings had anglers parked at them. I wanted to avoid that. The Quabog is a nice little, out-of-the-way river. I’ve fished it before in the summer and it’s really not a trout fishery other than spring and fall. I’m sure that there are spots where the trout can hold out and survive during the summer but it’s likely not a legitimate destination for summer trout fishing. When the water is cool it’s a different story.

I knew the river had been stocked just the other day so no question about what I was after – I was looking for easy fun on some big aggressive rainbows. I ended up catching and releasing nearly 30 fish over the course of a couple hours. There’s no trick to catching these fish they’re just a lot of fun. I know some people look down their noses at stocked trout but I am definitely not one of them. They’re fun to catch and, in all honesty, without stocking in a lot of places here in the state there would be no trout (or very, very few) to catch. Other than a few exceptions we just don’t have the widespread habitat, water temperatures, etc. to support the type of trout fishing we’ve come to expect from our fisheries. This is doubly true for those who like to fish lakes and ponds.

Back to the actual fishing… I switched up flies only a couple times during the few hours I was there. I wanted to be able to see the takes and see my fly so I used some large sparkly/flashy nymphs and soft-hackles. My strategy was equally simple. I was fishing to cruising pods of trout in a large slow-moving pool partially created by a new-ish beaver dam (it looked to still be in the process of being constructed and certainly was not there when I visited the river in August). Cast in front of a group of cruisers, let the fly sink a bit, twitch a couple times, and bam fish on! Simple as that almost every cast. The fish were impressive – big, good fight, beautiful coloration. A few of the nicer ones I landed yesterday are below. 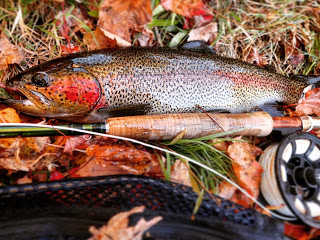 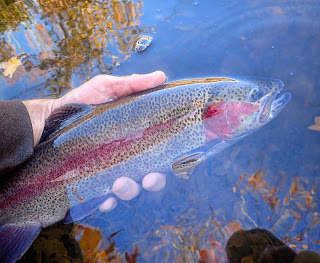 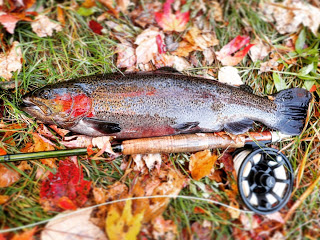 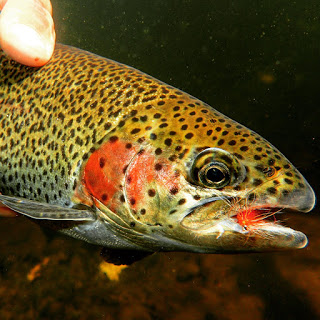 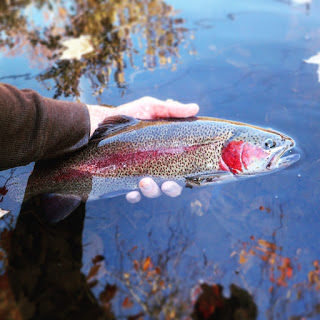 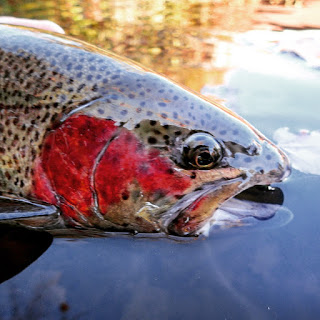 I almost never keep fish. I haven’t kept any since my trip to Alaska 3 years ago. However, I ran into my landlady Mrs. Lee Saturday morning as I was leaving and she said, unequivocally, that if I caught any fish she wanted me to bring her some back to eat. Well, as you can see I caught some fish so I kept my three fish limit and made my landlady happy. 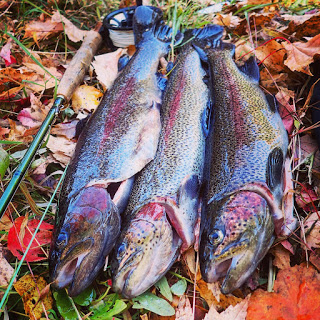 I know as fly anglers especially it’s been ingrained that catch-and-release is more or less mandatory. If you keep a trout you are in real danger of being ostracized, or at least looked down upon by your fellow fly anglers. In almost all cases I certainly abide by that notion. However, with these stocked fish, in particular those stocked into streams, rivers, and ponds with little ability to hold over coldwater fishes, there’s absolutely no harm in harvesting your limit. The majority of the fish are not going to make it through the winter (or through the summer if it’s a spring stocking) so why not take home some cheap, healthy, tasty protein to eat or to give to friends. Just make sure you follow the laws of the water body and don’t overdo it.

Has anyone else been getting out and enjoying the beautiful weather and the fall bounty?