I camped, explored, and fished on the Cape this past weekend. Saturday was an epic striper day to say the least, but I’ll get to that. I had to do some work down near Mashpee area on Friday so towards the last minute I decided to drive my own car, instead of a work vehicle, and just stay down there for the weekend after I finished my work on Friday. I booked at campsite at Shawme-Crowell State Forest near Sandwich. I sort of wanted to get a base farther out on the Cape but with short notice Nickerson State Park was full and I wasn’t about to pay three times more to stay at a private campground. The weekend started off good in a non-fish way. I spotted two state threatened/species of special concern turtles. A female Eastern Box Turtle that my colleague and I saved from getting flattened by a car crossing the road. 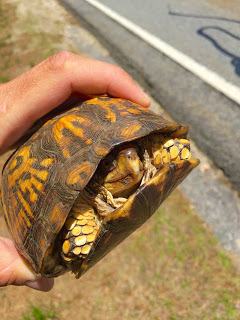 Later that day I came across a Diamondback Terrapin laying her eggs just off a trail on Sandy Neck near Barnstable. 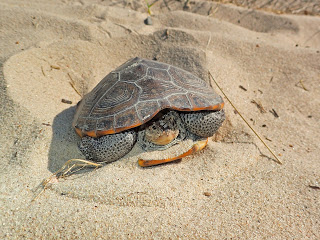 Friday evening/night I wanted to try out Sandy Neck. Unfortunately I didn’t realize that it would be so crowded with cars and campers. I ended up hiking all the way down and around the end of the peninsula – a twelve mile round trip when all was said and done! I probably should’ve thought that one through a bit better. I finally reached the end of Sandy Neck as the tide was draining pretty good. There were a few decent current troughs, eddies, and dropoffs where I picked up a half-dozen or so smaller stripers. It was an OK spot but I had previously fished the flats on the other side of the channel into Barnstable Harbor, which I liked a bit better. I did end up seeing a very nice sunset before making the long walk back to my car. 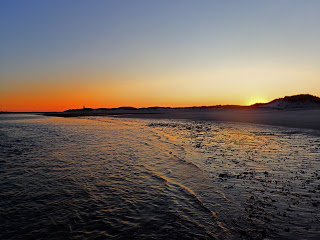 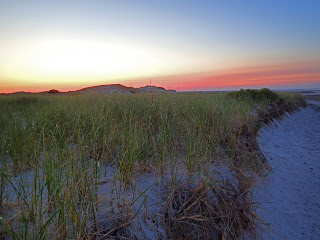 I made a plan for the morning to try out a spot I’ve been reading and thinking about even before I moved to Massachusetts. Monomoy Island. I’m so glad I did as it turned out to be a truly unbelievable day. I woke up early and made the 45 minute trip from my campsite to Chatham. I parked along the causeway connecting the mainland to Morris Island, where the Monomoy Island National Wildlife Refuge headquarters are located. I loaded up my kayak and wheeled it down the short trail to the beach where I launched. I paddled out of the small bay and out into the open water channel between the islands – keeping my eyes peeled for the Great Whites that are known to frequent the whole area around Monomoy Island. I rode the tide south towards the wildlife refuge proper. To be honest the whole area is quite confusing, especially at low tide when so much land gets exposed. Technically there are only two islands I believe. North and South Monomoy. At low tide, however, there may as well be a half dozen islands. If you go pay close attention to where you are.

I’ll spare some of the details but as soon as I got to the flats around North Monomoy I started to spot fish, which was very exciting because saltwater flats fishing is such a novel experience for me. I immediately began hooking fish on a olive/white clouser. Good fish too. Nothing huge but everything I caught all day was 22″-24″ with a couple stretching to maybe 25″ or 26″. Strong fish. I had my drag cranked and some of them still took out line. Here are a few fish I got during falling tide in current seams and troughs. Most of the fish were in small groups of 3 or 4 and viciously aggressive. They rushed to attack my fly almost as soon as it hit the water. 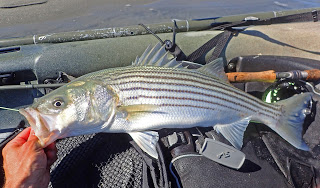 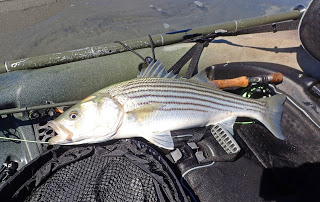 A bit later as the tide began to rise I was wading in the bare white sand just of the edge of an extensive eel grass area. As the water crept up striped bass literally started pouring out onto the flat from the deeper grass, turning parallel and following the grass edge. I had a nearly continuous flow of fish to cast to for the next hour. Fish in groups were pretty aggressive while single fish tended to shy away from my presentation for the most part. Unfortunately the singles also tended to be the larger individuals. The tide continued to rise and I moved away from the grass edge in extensive, bare, sandy flats. Stripers just kept coming by in waves. It was unreal. Conditions were perfect and I could spot them cruising along like packs of wolves hunting sand eels and whatever else was out there. It was pretty much like this all the way through high tide and even continued as the tide started falling. At one point I stood in one spot while a huge pack of stripers made a big circle near me. I’d cast out and catch one and by the time I landed and released it the pack would be completing its circuit and be headed my way again. Catch, land, release, repeat. 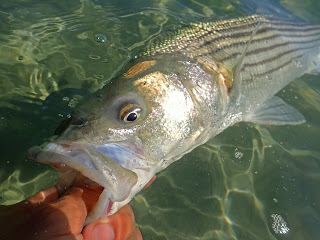 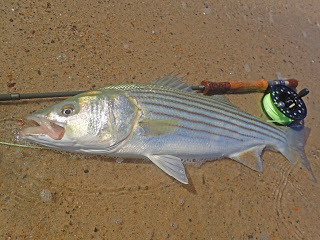 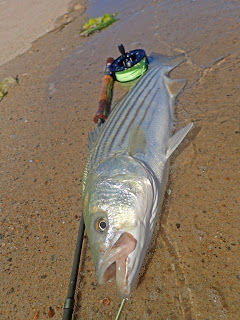 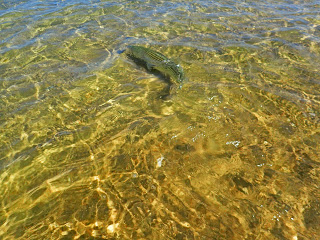 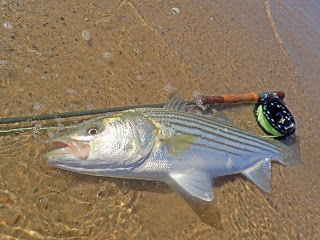 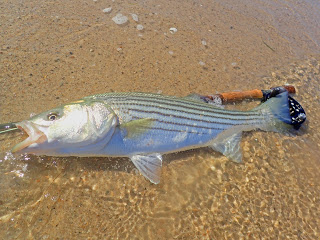 I didn’t keep count but I’d be willing to bet I landed at least 50 stripers on Saturday. It was truly an epic day. I finally had enough, I had been out all day and was anticipating a long paddle back. Before I started the journey back I tooled around a little and got some pictures of the abundant wildlife (no seal pictures today although they were around). Oldsquaw, Black-backed gulls and their chicks, barnacle encrusted horsehoe crab, and what I can only imagine is a seal that barely escaped a Great White only to die of its wounds on shore. 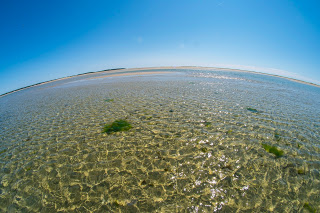 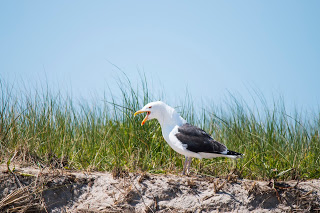 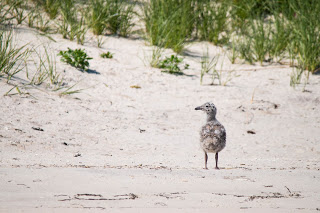 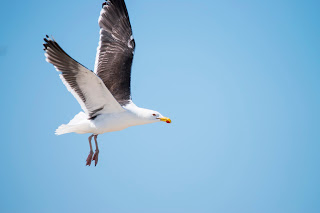 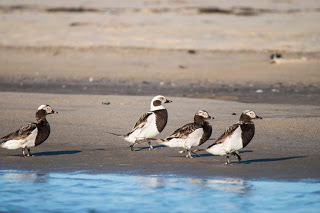 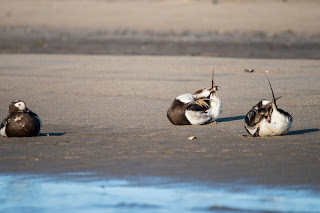 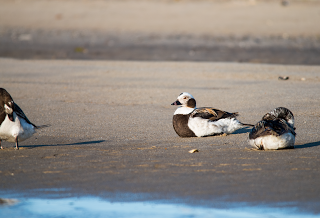 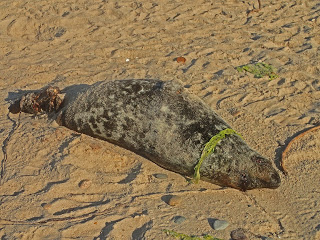 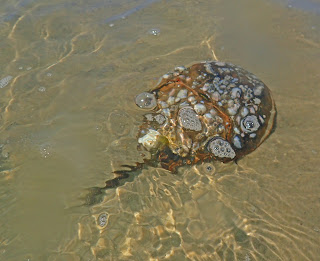 All in all an incredible day. I’ll end with one additional note of caution, besides keeping track of where you are and watching out for sharks…there is a channel separating the islands from the mainland that is a breeze to cross at extreme low tide but is not the same animal at higher tide. It’s fairly shallow so with the right combination of wind and tidal current the waves are intimidating. My paddle across the channel at about mid-tide got a little hairy. The best strategy for me was to paddle hard up the face of the wave and surf and down the pack side to pick up speed for the next wave. It worked out but I probably should have waited out the tide and crossed later.

I can’t wait to go back to this spot. Hopefully I can run into some bluefish. I think trout fishing in the mountains of western Mass is in the plans for this coming weekend though. How did everyone else do this weekend? Any big fishing plans for the long weekend?

11 thoughts on “Epic weekend on the Cape”