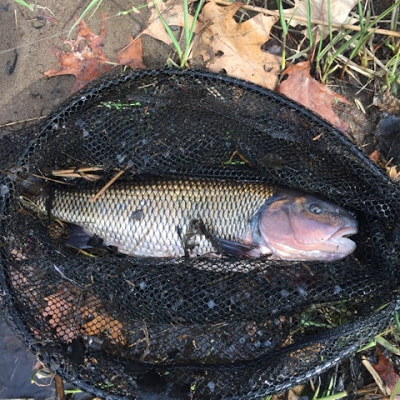 I’ve been fishing a (reasonably) local freestone that’s new to me. It has both stocked and wild fish. It’s where I landed the “Big Surprise,” up above.

Over the past month since the stocking, the fish have left the spots where they were placed initially. So, it’s been a game of hide-and-seek.

After some trial and error, I’m finding non-rising fish in one of two spots: deep in a major trench or at areas most anglers ignore.

I find the former tough but doable with Euro-nymphing. I can get the flies down quickly and hopefully sense a take. The latter has been an indicator nymphing game for me.

On a recent outing I hooked about a dozen trout at one narrow run on the far bank. A “sweet spot.” Three of the trout were incredible jumpers. Most people don’t wade across, I guess.

As I didn’t want to spook the trout, I started by chucking a New Zealand indicator rig at them. Then, when I get no more hits, I crept up closer and did some Euro-nymphing. I usually get a few more takes from the fish along the bottom. So, I start with artillery and finish with sniper fire.

So, all this to say that it takes a while to figure out where fish are holding. But, once you’ve found that sweet spot, it will produce. I’ve fished that spot repeatedly, and I always get at least six (or more) hooksets out of it.

In retrospect, this sweet spot was ideal for trout:

Regarding the last point, I fish a great deal of the ‘B’ water, spots that don’t look like much when you’re standing from the bank. For example, my new sweet spot is deep even though it doesn’t look like it. It’s only when I went to a retrieve a fly that I witnessed for myself (yikes!) that there was a deep and narrow trench, and many rocks, there.

So, keep your eyes open when you fish. 90% of the fish hold in 10% of the spots, IMO. And, indicator nymphing is a great way to cover new water. You chuck it out there and see what happens.

5 thoughts on “Finding a ‘Sweet Spot’”