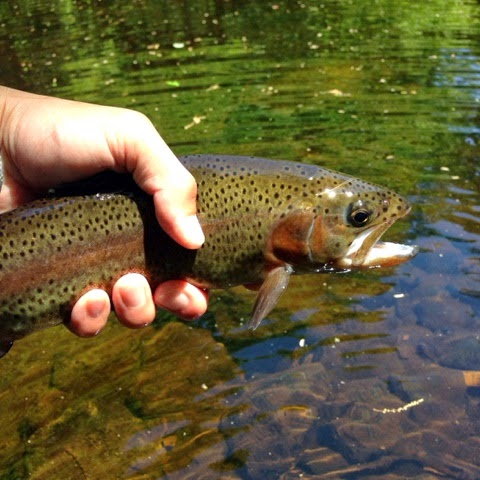 During the drive back from Connecticut, I made a quick pit stop to fish the Natchaug. I fished it a few days ago during the drive down. Landed 40 trout (more here).

What a difference a few days makes. The river was very low, and there were hordes of folks, swimming in the choicest pools.

Honestly, that was cool with me. I chatted with some really nice folks, who were hanging out on Memorial Day weekend and just relaxing.

So, I targeted the “B” waters. These are the in-between sections that no one fishes. The water looks too shallow and unproductive. Most people target the pools.

Honestly, it didn’t look that promising. I hiked and fished and kept on hiking. Then, I ran into a short run. Hooked two, including a nice brown. Both fell off.

Then, I saw some trout rising in a short pool. It was an amazing sight. The sunlight’s angle was just right, and I could see the fish, how they beautifully used their fins to glide around and pick off emergers and bugs on the surface.

I put on some dries. No takes. Then, I went to a fly that was responsible for most of the 40 fish the other day: a beadhead Hare’s Ear, which I gently pulsed up and down.

Five fish came to the net in short order, including some good-sized rainbows (photo of one up top). Then, the other trout completely shut down, knowing I was there and highly suspicious of any and all flies.

And, that was that.
A safe and peaceful Memorial Day to all. May we remember those who gave the ultimate sacrifice for their nation, and also, all men and women currently serving to protect our freedom.
28 views