What a strange day yesterday at the Farmington. My usual spots and flies didn’t work. And, I got more than I could handle.

Spot A, which consistently produces wild browns for me, yielded nothing. I usually get six or more hook sets there. This time, zippo. I kept trying, for hours. I went through all of the normally-effective flies. Not even one grab.

Spot B, which yielded a 18″ brown last time, and usually produces a big fish or two each time, yielded a 4″ baby rainbow. Very pretty parr marks but not the slab of ferocity I was seeking. I felt like giving up. I had fished a long time by that point.

Spot C, which usually provides a huge number of holdovers, gave up only two hook sets. One was a huge brookie that fouled me in some branches and broke free right after I missed netting it by an inch or two. Ugh! The other fish was a massive rainbow. Victory! The usual flies there didn’t work, though. It took some fiddling around with various flies until I found a match.

Then, Spot D. It is a run that is about 15 yards long and three yards wide. It doesn’t look like much at all. But, at the end of the run is a huge and submerged rock. Before it is a very deep and calm spot, as current backwashes.  Three current streams meet as one and create a remarkably and sudden deep trench.

Unfortunately, it is among some very fast water and slippery boulders. I’ve fallen in, and it’s not a fun time. So, you really cannot move around once a big fish is on. It’s all about luck, keeping the drag tight, using heavier tippet, angling the rod tip to your advantage, and easing the fish as quickly as possible into calmer water.

I previously have fished that spot from the side, with an indicator, and could usually hook one fish each time. This time, for no real reason, I was right below the rock and decided to tightline nymph with a heavy anchor fly. I pulled out many fish. They all were good-sized to large. The trick was to get the flies deep and just in front of the rock.

Then, I hooked a very big fish. It immediately jumped, and I could see that it was the largest of the bunch. It was fat and long. Yikes.

Moreover, it was savvy, gunning towards crevices around rocks, jumping again, and fleeing to the fast current to try to break my line. It completely bent the rod. It used the fast current to its advantage, and I thought the 5x would snap. Over time, I applied side pressure to ease forward the fish, and later, to pull it into slower current.

But, the fish was incorrigible and pure muscle. It kept surging and pulling line off the reel. I couldn’t move much down river, given the current and the boulders, and so, I didn’t have much leverage. So, the battle went on and on.

I became concerned about over-playing the fish and decided to put the max to the hardware. The rod bent more, and I was expecting the tippet to snap. The drag did its work, the knots held, the Sage ESN rod tip absorbed the massive head shakes, jumps and power surges, and the rod’s fighting butt was a friend in need.

Here is the fish. 17″ of anger and jacked-up muscle. 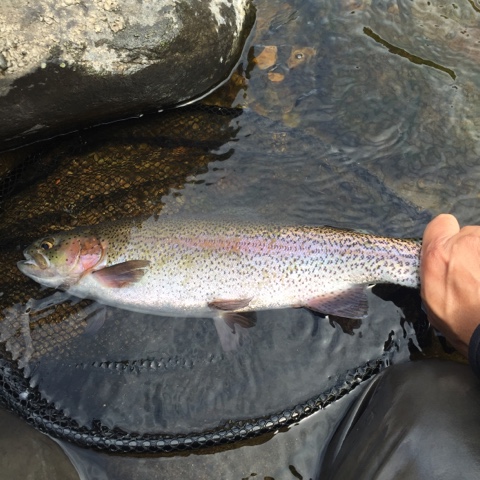 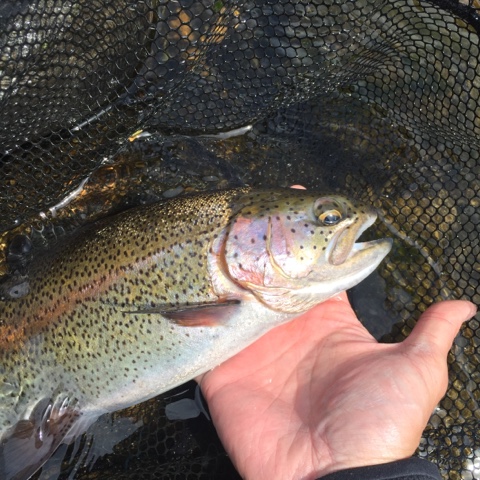 It had wear-and-tear marks from rocks on its belly and throat, and so, I don’t think the fish was stocked recently. It certainly didn’t act like it. I unclipped the net and wedged it in the water among some rocks to let the fish recover at its own pace. Ate a sandwich and felt very, very grateful. Took a few pictures.

Then, it was time to say goodbye and release the trout. It literally jumped out of my hand, per the video up top.

Unbelievably, all in all, this one run produced 10 fish. All were good-sized and fought like crazy. Nearly all the hits were on a #18 brown WD-40 variant behind a tungsten nymph that was very heavy and could get the rig down.

That one spot and one pattern together produced wonders. I later checked; that spot is not anywhere near a stocking point. But, the fish were there. As I’ve blogged before, a few spots and a few flies generate nearly all of the action on most normal days. The Pareto Principle in action.

Feeling relaxed, I languidly walked down river to head to the car. I decided to fish while I sauntered. Was surprised to land this toddler of a salmon and a wild brown.

A nice coda to a mystifying and exhilarating day. Glad I didn’t give up. 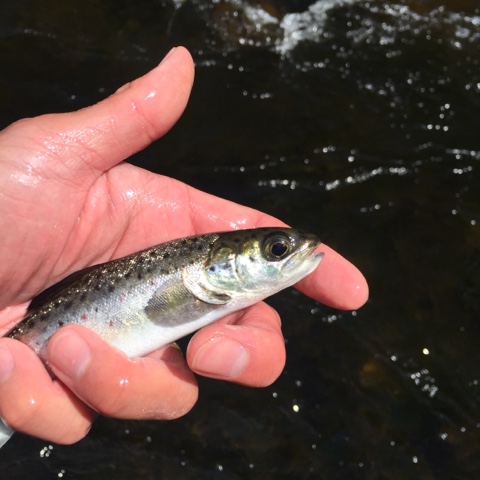 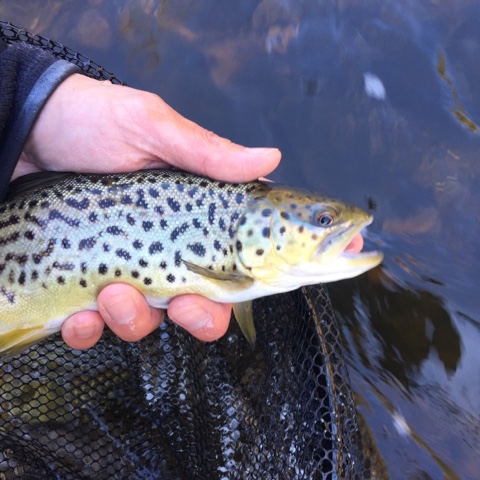 One thought on “A Battle at the Farmington River”