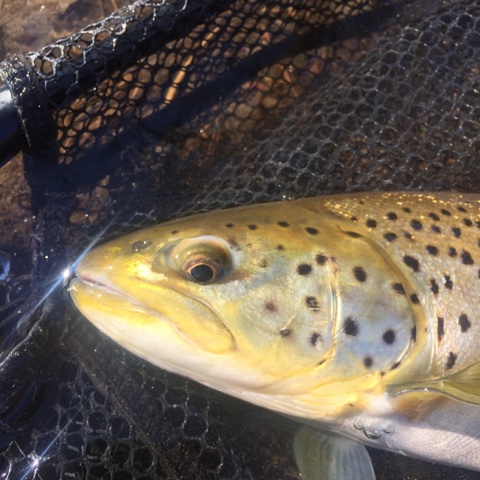 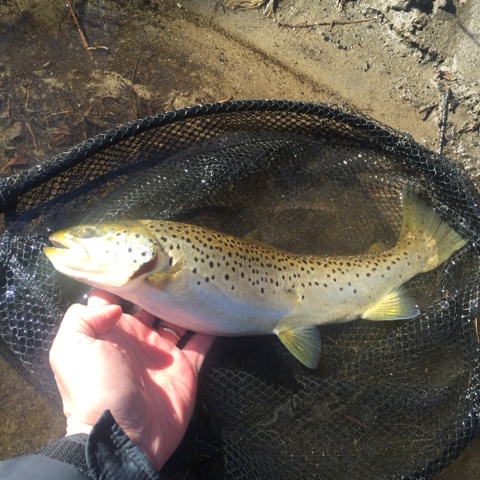 I yesterday spent the day at the Farmington. It was pretty cold, and I thought that might keep away the crowds. Near one parking area, a very experienced old-timer wasn’t fishing and declared out loud that a cold night and a falling barometer meant that fish won’t bite.

Not a good omen.

I focused on the permanent TMA area, which has not been stocked, and so, contains the more wily and powerful fish. I brought my 11′ Sage ESN 3-wt. and used it to Euro-nymph, and, for longer and hard-to-reach runs, chuck around a strike indicator.

I caught a large number of fish. The rainbows were dark, and I think the browns all were wild, as they had perfect fins and looked pristine. Not a stockie in the bunch.

My fish of the day were a 15″ rainbow and a 15″ brown (see above). The former was an amazingly dark color with much dark purple everywhere. I’ve never seen such a fish.

The latter fought ferociously, with many determined head shakes and lengthy surges. It was all muscle. I think it was surprised to be hooked, as it was at a stretch of the river that is not often fished.

I was pretty concerned that my tippet would snap, and it thankfully did not. I have to say that the Euro-nymphing fly rods have incredibly flexible tips that are designed to preserve light tippet when a fish surges (and detect very soft takes). They also have very stiff fighting butts that can really pull in a fish.

In the net, the fish thrashed around with a lot of vigor. Thankfully, I was able to take a few shots before it pretty much shot out of the net.

There’s nothing wrong with stockies. I’ll take ’em any day. But, there’s something special about stream-bred brown trout, more than likely a descendent of super-fish Survivor Strain DNA. They fight like crazy.

And, in 2013, a fish survey showed that half of the fish in the Farmington were born there. So, the Farmy is rapidly becoming one of my favorite rivers. A very pretty river loaded with fish, some of which are tough to fool.