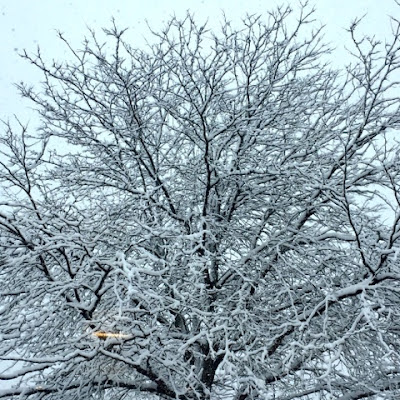 On Friday, after finishing work, I headed out into the snow storm. Roads were slick, and the wind was for real. I didn’t care that 8″ to 12″ of snow was coming down. I wanted to fish.

A local freestone river was running high, as it had rained heavily before the precipitation turned to snow.

I waded into the river and did my best to cast amidst the swirls of snow. At times, I could barely see. Now and again, there was a loud cracking sound as a branch heavily weighted with thick wet snow broke and tumbled down. It made me a little nervous.

I worked some quiet to moderately-fast water. Nothing. I switched flies. Nothing. I waded further into the middle of the river to target a deep run. A take, a tug, and the fish popped off. Darn.

I changed flies a few times and kept gunning for that fish, but it was no longer in the mood to eat. I was hoping to run into some of its neighbors but did not.

I reeled up, crossed the river and went to the bank.

I ambled down river to a very quiet tail out of a pool. I was hoping that fish might hold there when the water is high and fast. I targeted some barely moving and deep water on the side.

A first cast, and a small Sexy Walt’s flew through the air. A soft take! The rod bent, the fish took line, and the hook set held. All seemed well again. The trout fought valiantly. Here it is: 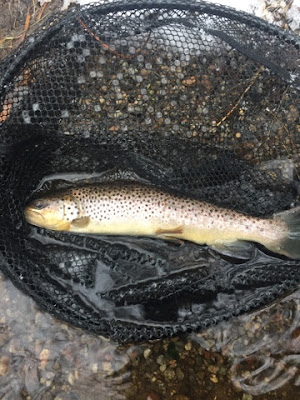 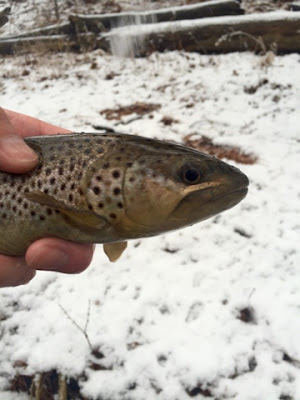 A brown about 11″. Very feisty, and it bolted once released.

I worked other stretches of the river. No other takes, but I didn’t care. One fish in a snow storm is more than enough for me.

I walked back to the car. After two hours outside, my hands were red and very cold. The snow made it hard to see.

I drove to a favorite spot for a snack. A cup of hot coffee and a bowl of pea soup never tasted so good.

2 thoughts on “One Fish Is More than Enough”