On my most recent outing, I went to the Swift hatchery pipe area to test out the Bunny Midge.

I connected again with Dan, Dan Trela, Doc, Phil, Peter, Bob O., and others. Saw Wooly Bugger George, who then offered to drive me to his house for a coffee break and to see his very impressive collection of flies. That was fun.

And, I had another really good day. In particular, I twice caught the same fish. It has a partially missing tail, a wide girth, and is pretty dark. Very recognizable. I’ve caught it a few other times, too. So, I think I’ve landed that fish five times in all. Photo below. 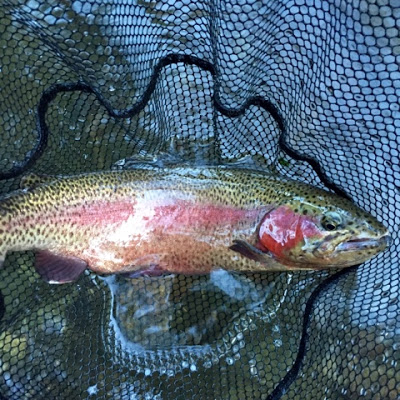 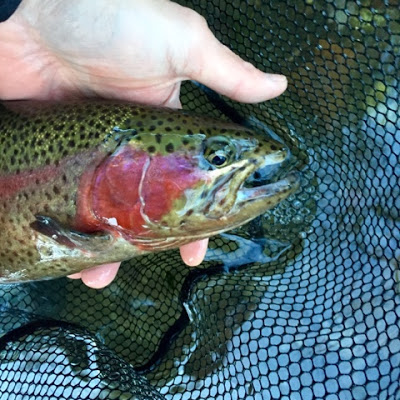 All this to say that I’ve really enjoyed the chance to fish the Swift the past 15 months, meet so many kind anglers, and learn a great deal about fly fishing.

Also, I had long avoided the hatchery pipe area, but it has grown on me the past two months. I still prefer the river north of Rt. 9, but there’s a certain esprit de corps among anglers at the pipe, given how close we are to each other.

All this to say, also, that I am dreading New Year’s Day. That is when the Swift below Route 9 goes back to catch and keep. Folks tell me that the hatchery pipe is pretty wiped out in short order, that on January 1, it is like a fishing derby with many anglers and their stringers and buckets. I really don’t want to witness the carnage.

Hey, it is legal. But, it feels weird to know that the trout have worked so hard and nearly all will perish and end up in someone’s freezer. Good news is people say there will still be fish north of the pipe, and, of course, north of Rt. 9 in the permanent C&R area.

I hope to fish the pipe area as much as I can until Dec. 31. I guess I should say farewell to every fish I catch.

Hey, keeping fish is legal. But, it doesn’t mean that I have to like it.

5 thoughts on “Saying Goodbye at the Swift”