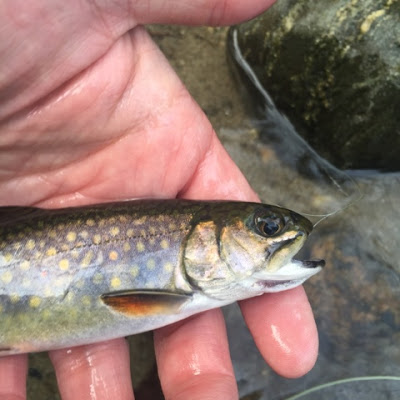 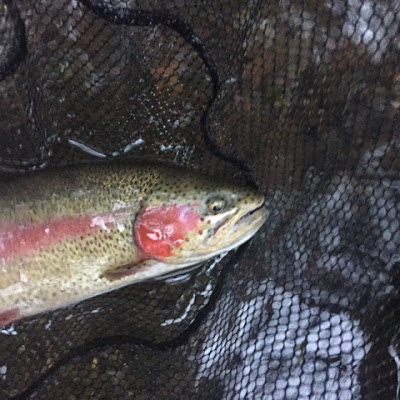 I arrived back in town two days ago from a Christmas trip. A long 17-hr. trip. With the forecast no longer predicting freezing rain, I rallied today and headed to the Swift.

Since “catch and keep” below Route 9 goes back into force tomorrow on January 1, I headed to the hatchery area.  Say farewell to those fish that will end up in someone’s freezer.
I arrived at dawn and was the fifth car in the dirt lot.  Quite a few people arrived around 12 noon, and I wrapped it up by 1 pm. Water was about 44 °F (trout tend to get sluggish below 40 °F). So, I was hoping for some fish activity, but was surprised to land about six brookies and 15 or so rainbows.I spent a few hours throwing some dries, landing nothing. So, I switched tactics. Nymphing was very productive, and I used some flies that are among the first I’ve ever tied. The ugly ones. Some of the recent and very nice-looking flies…received no takes. Go figure.

An experimental fly made from yarn was, by far, the #1 fly today. I wrote about it here. I call it the “Wiggly Woo.”

It felt great to be outside and on the water. It has been a very fun 16 months of learning how to really fly fish (previously, I fished only once or twice a year). I’m grateful for the many, many people who have given me great pointers and perspectives.
Hope everyone has a safe and fun New Year’s Eve.
23 views