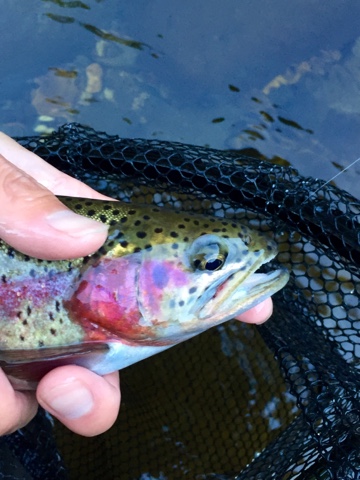 As I drove to the Chesterfield Gorge catch and release area before dawn, I became more excited. With the lack of rain this summer, I’ve been staying away from our freestones. But, this morning, I was returning to my favorite river: the East Branch of the Westfield.

I had looked up some nearby water temperatures and was glad to see other local rivers at 50 degrees Fahrenheit. That’s pretty darn ideal. As I drove down the dirt road, I was surprised that I didn’t see any other cars. In fact, for most of the day, I saw only one other angler, and he was nearly out of my purview.

I was excited when I arrived to see quite a few bugs hatching. I had visions of all-day dry fly fishing. So, I started throwing dries with my 000-wt. I know this river well enough to know where trout normally hold. Nothing. I kept trying, incorporating upstream and downstream slack casts. Nothing.

I switched to Euro-nymphing on my 3-wt. The action started immediately, and kept going except for about an hour at mid-day. I hooked quite a few trout. Landed to the net 52 of them. Half were new silvery stockies. The other half were much darker. I have a theory that an influx of new fish creates competition and makes “veteran” fish more aggressive. And, the water was an ideal 50 degrees Fahrenheit all day.

Nearly all of the trout were about 10″ to 12″. So, they’re not the 18″ bruisers you find at the Swift. But, honestly, I was longing for a break from the crowds. And, the Gorge area is so incredibly bucolic and serene. There’s no cell phone coverage, and so, you really can “get away.” 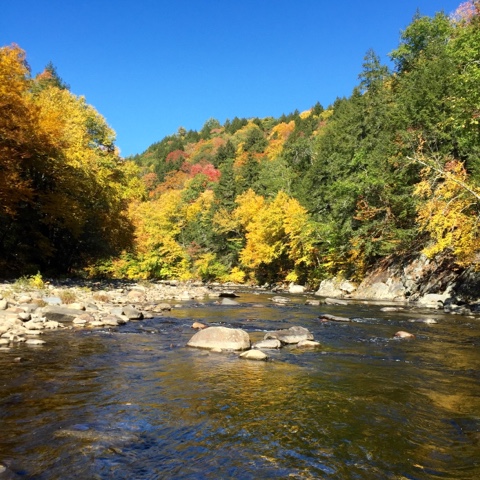 Productive flies: as the “anchor fly,” #14 and#16 tungsten-beaded soft-hackle Frenchies and Hare’s Ears got consistent hits (recipes for both here). I add hot-pink thread behind the bead to create a “hot spot.” Best trailing flies were #20 and #22 Midge Pupae and a #18 Caddis Emerger. Hatches were going on pretty much all day. I saw caddis, BWOs, and very tiny midges. A Caddis Emerger fished on the rise fooled some fish, but most of the takes were on simple dead drifts.

Ineffective flies: dries didn’t work, nor did midge larvae, which was surprising to me. I tried a streamer in what is normally a very productive hole. Zilch. The fish wanted something smallish in the bottom 1/3  of the water column, not something up top or big. I stomach pumped a few fish. Quite a few cased caddis, small mayflies, and midges. All really small.

Suggestions: when the river is <250 cfs, I find that the trout hold in/near the same runs, quiet seams, and rocks each time I fish this river. So, make mental notes as to where you find fish, as that will pay dividends for you. Particularly good spots are the tail end of pools or runs. Also, amid the choppy riffles, look for very slow-moving seams and bubble lines. The trout are predictably there. Make sure, though, to use sufficient weight to the flies quickly into the strike zone–losing nymphs is part of the drill. I use 6x fluorocarbon, which quickly sinks.

So, get out there and fish. If you’ve never been, I recommend a guide, such as Grant Figura. It is a very long river and one with which it’s money well spent to have someone acquaint you.

Just note that the Westfield is pretty slippery. Every time I fish it, I slip and fall. Thankfully, nothing too serious.

Those trout are worth it…. 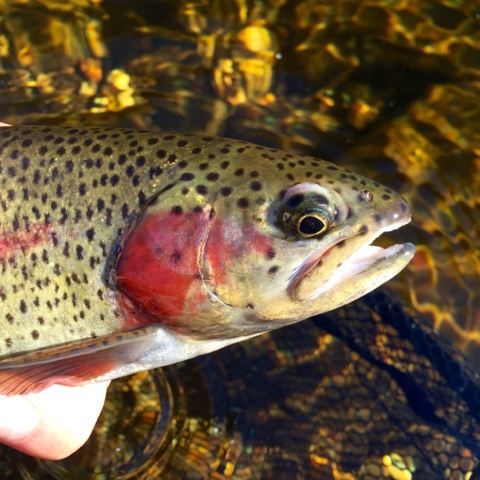