I carry with me many emerger patterns. I think those flies look like sitting ducks to trout. They mimic vulnerable bugs that attempt to rise to the water’s surface. They’re high-percentage snacks. 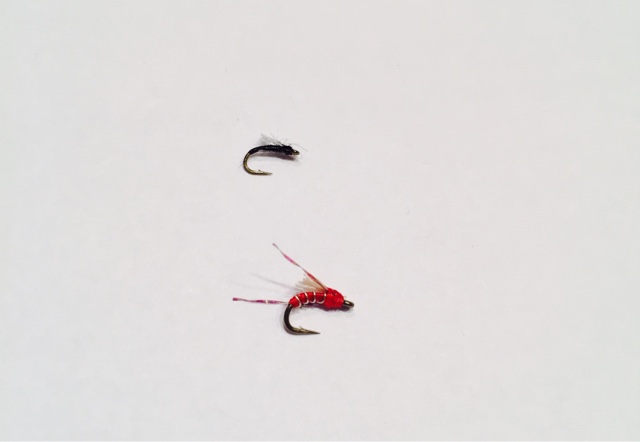 Most of the takes I’ve had this summer have been on emergers: flies with shucks, materials suggesting air bubbles on their backs, and/or nascent wings. Fishing these flies with an induced take has been effective.

So, I’ve been thinking of some more emergers. It makes me think of the Serendipity fly. I have a long-time soft spot for the Serendipity. During an epic stay a few years ago on the Upper Madison, this fly accounted for more trout than any other. The fly also took a few trout on my recent outing at the Swift. So, I’ve tied up some more, in both black and red, in sizes 22 and 24.

For the smaller fly, the black one, I used white Z-lon for the wing and black thread for the body. It is slim and simple, a bit more New England, if you will. Black and white. I’m calling it “The Puritan.”The red fly is one of the classic Serendipities. I used elk hair, red thread, silver wire as ribbing, and crystal flash for legs. This one has bells and whistles, like a flashy sports car in Silicon Valley.

8 thoughts on “The Serendipity”