The Swift is a special fishery. It’s a tailwater that offers more consistent temperature and flows for trout, and it’s reasonably close to Boston. The area above Route 9 is catch and release only, and there’s no bait allowed.

What does all this mean? Wily trout.

There are folks who have fished the Swift for decades. I’m not one of them: I started fishing it only last year. So, take my POV for what it’s worth, but here’s what has worked for me.

1. SWITCH OFTEN YOUR FLIES
Last time I fished the Swift, I started to nymph with some go-to flies, just to get a baseline on what the trout wanted. I nearly always get hits on a Hare’s Ear trailed by a small Pheasant Tail. Nothing.

So, I started to try various flies and ended up landing 15 (more here). The JT Special streamer did particularly well. But, there was no fly in second place in terms of production: the Picket Pin, a pulsed Hare’s Ear, an egg pattern, a Caddis Emerger, and a Frenchie all took fish.

2. THROW SOMETHING DIFFERENT
There was an absolutely huge trout in a particular part of the Swift. It was chasing away other trout and commanded the prime feeding lie in that stretch. I tried various flies. Got some looks. No takes.

Then, I tried throwing the Marabou Nymph. Boom! 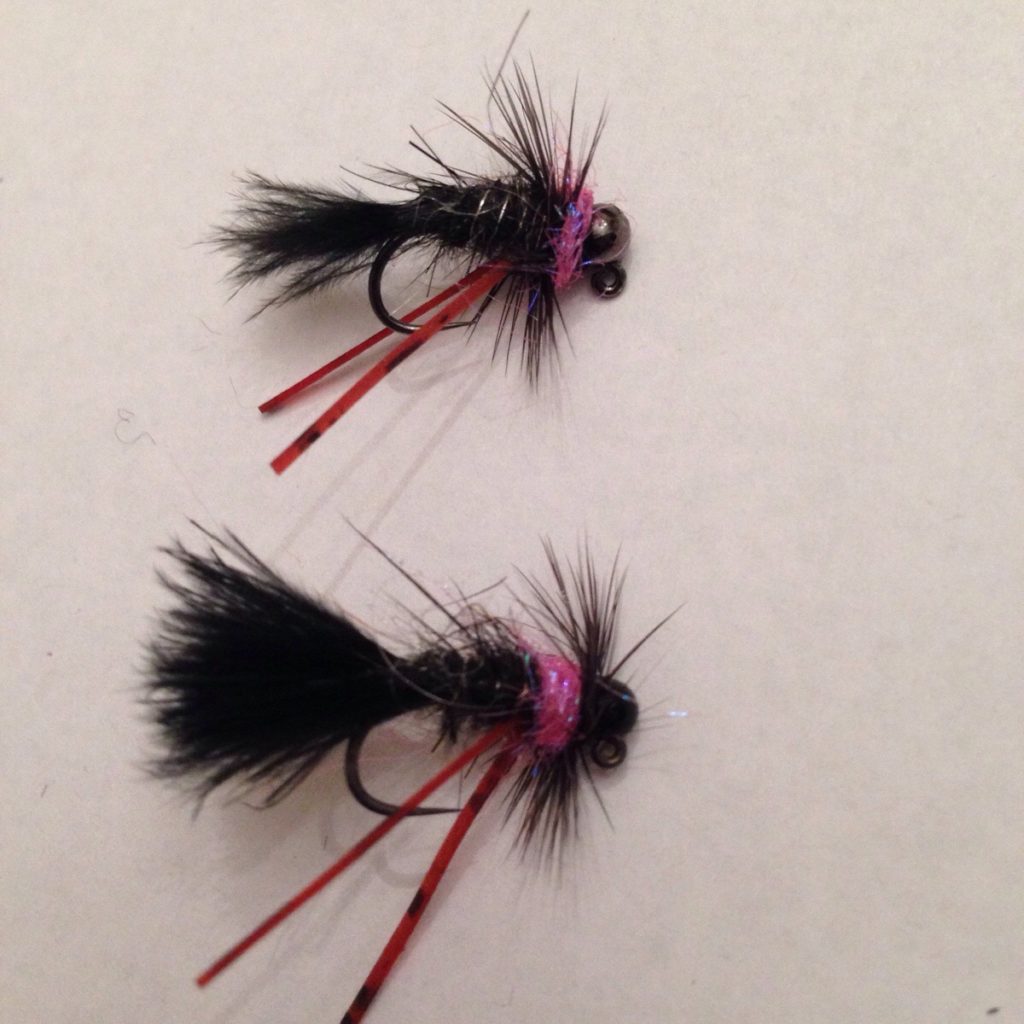 In fact, during my recent trip up to Pittsburg, NH, the Marabou Nymph (recipe here) accounted for all the big trout. I think it’s a funky-looking fly, and most trout instinctively mouth it to see if it’s food.

Since it’s a pattern I invented, fish are seeing it for the first time. They’re more willing to take a risk.

3. IT’S TRUE: USE LIGHT TIPPET AND SMALL FLIES
I’ve started using fluorocarbon tippet for my nymphing and for dropper tags. It’s less visible than nylon, and it’s much stronger.

I like TroutHunter. A competitive fly fisherman told me that most anglers who compete use it. And, it’s cheaper than some other brands. I carry it down to a 9x. On the Swift, I don’t fish anything thicker than a 7x.

The midge hatch on the Swift, like most tailwaters, is ever-present. When I stomach pump Swift trout, it’s the most common food form I see.

4. I NYMPH
For some reason, I’ve never had much luck with dries, even if I’m throwing a #32 CDC puff fly. I’ve also tried dry-dropper rigs. Nothing.

I nymph 90% of the time on the Swift. I will use a New Zealand strike indicator at the Y Pool, but I tightline nymph on the rest of the river. I find that flies have to be at the right level of the water column for the Swift trout in most situations. So, my flies are sub-surface.

5. TROUT KNOW YOU’RE THERE
It’s true that the seasoned Swift trout generally don’t swim away when they hear or see you. But, my theory is this: they will clamp shut their jaws if you get too close.

Recently, I was sight-casting to a trout. For some reason, an angler decided to walk behind me and a few other anglers to head down river; I guess he didn’t want to get out and use the path. And, he was truly darn loud with all of his thrashing around.

That fish didn’t flee, but became agitated and wasn’t interested in feeding. It shut down. I kept at it and hooked it 10 minutes later.

Similarly, I was fishing the Bubbler. Nothing. I then made an extra long cast. A very strong strike. I think that fish didn’t think anyone was around, and so, was disarmed.

I’ve also found that heavy nymphs that “splash down” will spook the trout. So, I carry nymphs in a variety of weights, and switch them up. The flies that work well in the Bubbler, for example, are much lighter.

The Swift is a challenging fishery. But, it can be very rewarding. It takes some outings to get a feel for it, but once you get your “river legs,” you’ll find the Swift will give back as much as you put into it.