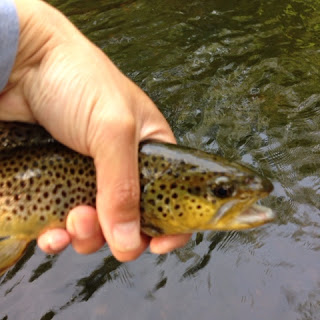 I woke up before dawn to fish. The roads were empty, and it was very peaceful to drive on the abandoned roads, in the semi-dark. I brought my trusty 3-wt. specialty rod for tightline nymphing. The goal was to land some bass. I had only a few hours.

I decided today would be about The Basics, and so, I fished Frenchies, Hare’s Ears, Pheasant Tails, and Caddis Emergers. All did well. I landed a pile of panfish and fallfish. There was also a smallmouth bass.

Surprisingly, I also hooked four brown trout. I’ve not seen trout in this particular local stream in about a month, and so, it was a shock to see them this morning.

Given that the water was 75 degrees, I played them quickly. Two popped off, as I was pulling them in so aggressively. I’m totally fine with that. I released the other two, and both swam off. I managed to take a photo of one (see up top), and the other one made a quick get-away.

I’ve read that brown trout are sensitive to light, and so, I guess fishing at dawn or dusk during the summer time makes sense. Given the warm water temperatures, all the trout were in the riffles or just below, in the highly oxygenated-water.

I have mixed feelings about gunning for trout when the water is warm. As I’ve written in the past, warm water isn’t good for trout. I didn’t think there were any trout in that stretch. Hopefully, I didn’t hurt any of them. I certainly did my best to bring them as quickly as possible.

It was a very peaceful morning. A wonderful respite from what was an unpredictable work week last week.

2 thoughts on “Brown Trout at Dawn”