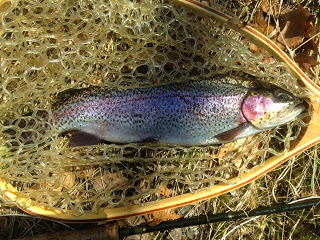 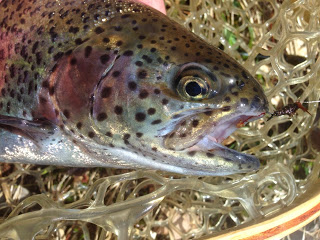 With a prolonged ice fishing season and an early June trip to the Connecticut River headwaters on the docket this year, I knew I wouldn’t be hitting the trout waters hard in late March and early April. Combing through my list of usual haunts in Massachusetts’s Northeast District, there was one spot I knew I wanted to visit as soon as humanly possible: the Parker River on the Georgetown/Groveland line.

Driving by, the stocked stretch of the Parker isn’t much to look at. The best run is smaller than half—heck, maybe even a quarter–of a football field; just a tiny little spit between Pentucket and Crane Ponds. The water warms considerably in the summer, so holdovers are few and far between.

What makes this stretch a favorite of mine is family history. When I was a toddler, my father would prop me up on the bridge and ask me to count the “bullseyes” as stocked trout rose to the evening hatch. My family used the pool as a launching point for numerous summer and fall canoe trips. When I was a teenager, the area’s secluded parking area kept me away from prying parental eyes. Now, almost forty, I returned to the Parker determined to catch one of the fat stockies the state graciously puts in the pool below the Thurlow Street bridge each spring.

Last year, I arrived at the pool around 6:30 am and spent the majority of the time chatting up an old timer who was fishing off the bridge using Powerbait. This allowed another fly angler to swoop in and grab the spot I was eyeing. Strapping on my waders, I snuck in below him as he drifted a nymph downstream while I casted streamers upstream toward the opposite bank. About three drifts in, he hooked into a healthy 15-inch rainbow and scooped it up in his net. In the span of seven minutes, he repeated this feat twice more, gathered up his limit of trout, and pointed out to me where I should cast. I eagerly followed his lead, hoping to catch one of these bruisers myself.

I’m not sure if it was stupidity, stubbornness, lack of gear or a combination of the three, but I never switched over to a nymph. I just kept hammering away with every streamer I had. After liberating my third Mickey Finn from an overhanging branch, I threw in the towel and headed home in defeat. This year was going to be different.

The plan last Saturday was to wake up at 4:00 am, drive to Georgetown in my waders, ignore everyone in my path, and hammer that run with nymphs until my arms fell off. Things weren’t looking good when I came home from a concert at 1:00 am. As I sat at the kitchen table munching on Cap’n Crunch seven hours later, horrible visions of yahoos crowding the Parker filled my head. I nearly went back to bed. But I had a score to settle with that old river.

I rolled in at 10:00 sharp and found two other guys fishing—and neither were working last year’s honey hole. Still in my sneakers, I gathered up all of my gear and ran to the bank to mark my territory. It must have garnered some puzzled looks, but I was determined. I tied a size 20 caddis pupa under my Thingamabobber, pinched on a BB sized piece of split shot, and pitched it into the Parker.

The drifts were a tad bit sloppy as I hadn’t yet knocked off the winter rust, but when I hit the sweet spot, the yellow indicator sliced under the surface and the fight was on. The trout darted upstream … right into a pile of beaver cuttings and sprung from the hook. Foiled!

Two drifts later, I hooked up again, this time losing a nice rainbow when it became entangled in about 40 yards of submerged yellow braided line and broke me off. I switched flies, this time to a size 22 caddis larvae. Same results. They would crush every microscopic nymph I drifted by them and then find their freedom on some underwater hazard. After six lost fish and numerous hits, I finally got a gorgeous 15-inch rainbow to net on a size 18 sparkle caddis pupa and was overcome with relief.

I cycled through a few more flies, landing another fat bow on a size 18 zug bug before packing up.

In the five hours I fished the Parker, over a dozen anglers came and went, most of them using spinning gear, and only one other fisherman got as much as a bite. These are the same dumb hatchery trout that devour Powerbait in the local trout ponds, but, for some reason, once they hit this pool, they become extremely finicky eaters. You can pound the pool with lures,
you can tempt the fish with prepared baits, you can even pepper the water with dries during a hatch and they won’t give them as much as a sniff. They like their nymphs and they like ‘em small. And they really like to hit at the tail end of your drift.

The future of the Thurlow Street pool on the Parker seems in doubt next year. A fellow fly angler who lives on the river says that the state is tearing up the half-century-old bridge and putting in two new culverts later this summer. The area has already been ravaged by the beaver population boom so who knows how this diversion will affect the fishing. Those at the town meeting who discussed the proposal said the same volume of water should flow through when construction is completed. That doesn’t sound promising.

But, if you have a couple hours to spend, a box of small nymphs, and a magnifying lens to find their hook eyes, you might want to give the Parker a shot.

5 thoughts on “Jay Hale on the Parker River”