Colie Egertson is a guy to watch and follow (his blog here).

He really knows his fly fishing. I first interacted with him on the Reddit fly fishing sub-group. We then kept in touch. After I started writing for this blog, I saw a few of his comments and invited him to write a guest post.

One of my personal goals for this blog is to have it be community-driven. Have more and more people write blog posts and share their incredible knowledge. I’m so happy that Colie said “yes” when I asked him to do a post. I’m going to forward his post to Mass. DFW, actually.

And, I’d love if more of you would volunteer and write some posts. I’m at BlogFlyFishMA on Gmail.

Why aren’t there any trout in the Nashua below Wachusett?

Given the lack of winter fishing opportunities other than the Swift, I’ve been thinking a lot about tailwaters recently. In Massachusetts we have two coldwater tailwaters: the Swift and the Deerfield.

Tailwaters result from water that is released from the bottom of deep reservoirs, wherewater temperature remains relatively constant year-round. With this in mind, I began to wonder why the Wachusett Reservoir, another deep reservoir in MA,
doesn’t have a tailwater fishery in its outflow, the Nashua River.

My first guess was that the dam releases water from the top, where water is warm; however, examination of satellite imagery did not agree with this assumption. I did some further research on the dam and found an article released by the state at the Dam’s
100th anniversary in 2005. 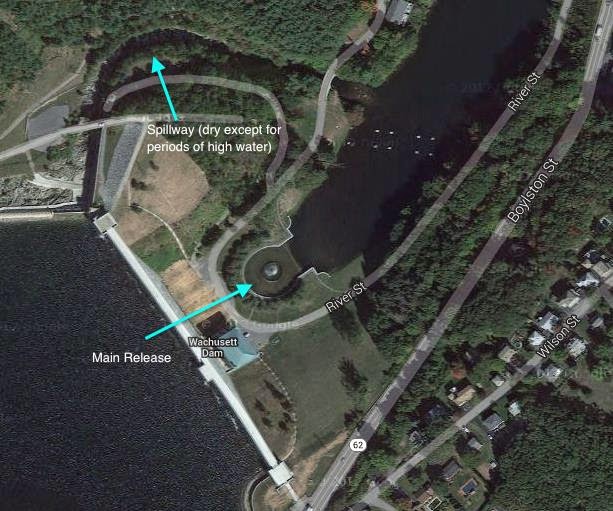 In this article I found the information I was looking for:

Four 48 inch diameter, cast-iron pipes pass through the
dam, 111 feet below the high water level, with valves to control water flow to
four hydroelectric generators located in the powerhouse at the dam’s base.

Now we know the Wachusett outflow is coming from 111 feet below the surface, so it must be cold. So, why no trout fishery? A quick glance at the satellite images from below the dam seemed to reveal an obvious answer: There’s a small dam directly downstream in Clinton, such that the reservoir releases water directly into a shallow pond called Lancaster Mill Pond. The water in this pond could warm to levels lethal for trout in the summer, but it isn’t a very large pond, and the Swift stays cool below the Bondsville Dams, so I wasn’t convinced that this pond was the culprit.

Next, I searched for data on water temperature on the Nashua in Clinton. To my surprise, I discovered there is a USGS stream gauge with a thermometer located about 2.5 miles downstream of the reservoir. To my surprise, the data available from the summers of 2013 and 2014 indicates that the water temperatures in this stretch of the Nashua should be suitable for trout.

In 2014 the water temperature only rose above 20 C (~68 F), the generally accepted threshold for a coldwater fishery, 3 times, each for 3-4 days, with a maximum temp of 24 C (~75 F). While these temperatures are not ideal, trout can certainly survive. The Quinapoxet River get much warmer in the summer, and it holds over trout, so water temperature is not likely the reason
there are no trout here. 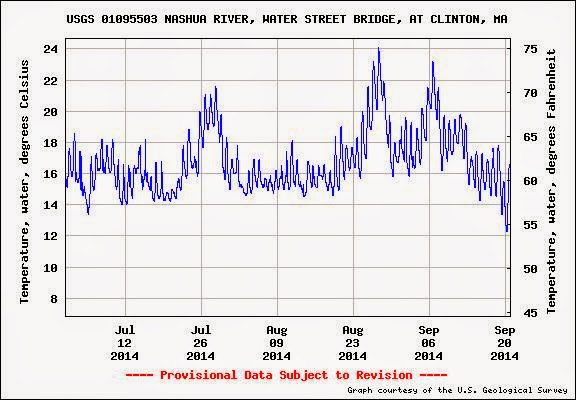 What steps can we take?

1. Contact the DFW. sk why trout are not stocked in the Nashua and if they were ever stocked in the past. It seems like this section of the Nashua can support wild trout, especially Browns, which have a higher temperature tolerance than other trout. If not, it should at least provide a good year-round stocked trout fishery. That being said, there could be a good reason trout are not stocked there.

2. Contact Trout Unlimited. The Central MA chapter is fairly active, and would likely be willing to lead the way on a project like this.

It would be awesome to have another tailwater in MA, especially one closer to Boston. It will probably be difficult, but hopefully something will come of this!