Yesterday I mentioned how I had good success at the Swift with my new “creation”. First, it is not really a creation; it’s more of a hybrid. And it may not be new, because with all the tiers out there, there are constantly new patterns coming out, so I’m not trying to steal the credit if this fly already exists.

The hot spot is very simple pattern that works very well at the Swift. It works from size 16 all the way down to 24. It is basically just two colors of dubbing that create contrast, and is also very easy to fish.
And although tiny flies are usually the best bet at the Swift, the picky trout are suckers for big soft hackles. The Partridge and Orange in particular is a trout slayer. Something about the way they pulse through the water, really gets the trout goin’!
So I got to thinking, why not combine these two flies?! I did, and this was my first result. 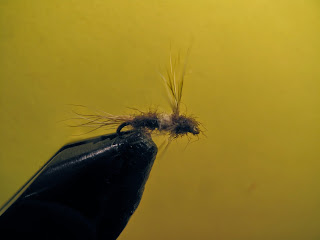 In this one, the hackle isn’t very long, but if it is a bit longer it’s better. I added a tail, just for fun, and I sort of liked it more that without one. Also, making the band out of a slightly orange-ish dubbing works too. 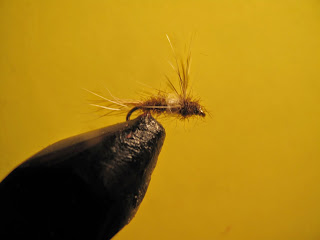 The hackle in this one is sort of folded, which is why it looks like a comparadun. The hackle should be long and wrap all the way around the hook.
It caught 2 trout and missed a few more in 20 minutes on Saturday, so it passed the test. I was using a size 16 hook, and no weight.
Tie some up, catch some trout, and let me know!
Recipe
130 views