I watched the video below with great interest and decided then and there what my fishing plan would be the next day: streamers!

With flows higher and a forecast for wind and rain, I readied for a fall outing. I tied up some favorite streamers and readied my seven-weight and my Thomas and Thomas Avantt.

I fished a great deal with the Avantt in Montana, throwing bobbers and dries. But, how would the nine-foot, five-weight do with streamers? I was itchin’ to find out.

I arrived at the river glad to see a river that looked more normal. After throwing small dries and tightlining during the low summer flows, it was a relief to see a river alive with current and many juicy runs and glides.

I started by throwing two articulated streamers, one with a tungsten conehead. I figured “shock and awe” could be a good strategy, and I worked some prime water a few times. No takes.

But, can that Avantt throw! Even with two big bugs on, I had no problem throwing with a modicum of grace.  It’s only now, as I look at the T&T site, that I see their tagline for the Avantt: “Remarkably light and responsive for effortless casts.” That was absolutely the case for me. 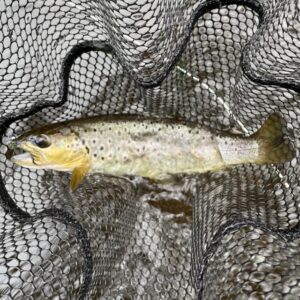 I downsized to two Woolly Buggers with the hopes to dupe fish and immediately started to see some boils and swirls. And soon enough, I was onto fish. No giants, but these modest-looking browns absolutely demolished my rig. With 3x, it was nice to horse in the fish and have enough backbone to deal with the current.

I continued to throw across and downstream while varying my retrieves. The Avantt loaded nicely, and it was quite easy to get the streamers out. I pinged fish here and there, along with some short strikes. It was a joy to see some aggressive trout.

At one point, I switched to my seven-weight and that definitely worked out the shoulder and casting arm. It was a relief to switch back to the Avantt.

I headed back home at about noon and picked up some fly tying materials en route to home. I’m eager to use the Avantt a great deal this winter.