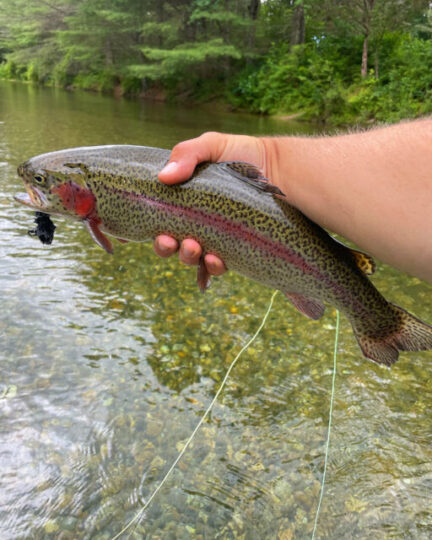 Fall is my favorite. No contest. My blood is too warm to really get to enjoy summer, so when autumn rolls around I can finally feel comfortable again. Even if I wasn’t excited about the feeling of cooler temps, I would still be excited about what those colder thermometer readings mean for trout fishing!

Fall is, in my opinion, the best time to fish for trout in Maine, New Hampshire and Massachusetts. Browns, brookies and landlocked salmon become exceedingly aggressive as they prepare to spawn. Brown trout especially seem to really rev up in my experience. This is a wonderful thing for those of us who gravitate towards streamer fishing.

Before the fall season really kicks off, I wanted to share some fun and super effective streamers to throw at these aggressive salmonids in the the coming next few months. Will a Woolly Bugger work as it always has? Yes of course. But I believe that there is an opportunity here to truly play on and trigger the predatory instinct in these fish. Many times, these elaborate style flies have been the ticket to triggering a strike when a size 6 Woolly Bugger just wasn’t getting the job done. Whether you buy or tie these flies, they’re a lot of fun and will produce.

Anybody who has watched the Mad River Outfitters Youtube videos with Brian Flechsig has heard of the Swimmy Jimmy. Brian is consistently promoting this fly in his videos and even maintains that it’s the greatest fly ever created! I’m not so sure that it’s the greatest, but it is quite a fly! The Swimmy Jimmy was created by Andy Sabota, who worked for Kelly Galloup for a number of years. It was a knockoff of Galloup’s T and A Bangtail fly and was originally designed as a topwater spook style pattern for bass.

However, it has proved exceedingly effective on many species including trout. Fished on a sinking line, it’s really a subsurface fly that moves a lot of water and does lots of herky jerk movements. This is an articulated pattern with a double hook marabou body and a spun deer hair head. What you are looking at in the picture is actually the top of the fly. It’s designed to swim sideways to imitate a dying or wounded fish.

The front hook is heated up and the front end of it is bent at a 30-40 degree angle with pliers. This gives the fly a unique action. Every time it’s stripped it dives down due to the bent hook. Pause your strip and the buoyant deer hair head will cause the fly to float back up. I would put this fly right up there with Blane Chocklett’s Game Changer in terms of a fly that can really get a predatory fish’s attention. Kelly Galloup has a really wonderful video on how to tie this fun and effective pattern.

This past July on a trip to Montana, the pattern I caught the most fish on was a fly called a Sculpzilla. The Sculpzilla is a rabbit zonker style fly with a stinger hook added to the back that is connected and secured by a strip of dacron fly backing. My only issue with the Sculpzilla was that it was a little too heavy for smaller streams. Very easy to snag and lose.

I remember wanting to tie a fly that could suspend and move water like a Muddler or a Zoo Cougar, but also have the snake-like motion and stinger hook that the Sculpzilla has. I went home after that trip and after a little experimenting I put these two ingredients together to make what I’m calling a Bunny Cougar.

I don’t claim to have invented this as I’m sure it’s been done before, but seeing as how I can’t find a particular pattern online that matches this, we’ll just call it by that name for now haha! Start the fly just as you would the Sculpzilla pattern, but then attach the zonker and backing to a Gamakatsu BS10 #2 to #4 stinger hook. This hook is super sharp and has a nice wide gap. From there I tie on either a hen soft hackle feather or I’ll do a rabbit fur collar for bulk, leaving enough room for a deer hair head. From there I simply tie a Zoo Cougar style sculpin head which I then shape with a razor blade.

This fly truly rings the dinner bell when fished on a sink tip line. It’s lands softly and then pops on the first strip. As it swims it writhes under water with a lifelike leech motion, while the deer hair head suspends it in the middle column, pushing water with every strip. The stinger hook helps with short strikes. I’ve had trout literally race each other to try to be the first one to attack this enticing offering. Gunnar Brammer does a fantastic tutorial on how to spin and shape the sculpin style head that I use on this fly!

Everyone who has fished with me knows that I am absolutely obsessed with Game Changers. These flies catch more fish for me than anything else on a consistent basis, regardless of season. When it comes to trout, I really love the added motion of the feather-style version. It ripples and pulsates with every strip. Combine that with the incredible lifelike baitfish action that comes with every Game Changer and you’ve got a pattern unlike any other. I often like to add a stinger hook to the tail shank if I’m tying them for trout. It really does help with short strikes.

For this fly the material consists of four shanks (10mm, 1omm, 15mm, 15mm) connected to a Gamakatsu SL12S #1/0 hook by using 20 lb. Surflon coated wire. The tail is chickabou, and the body is just hen soft hackles and Chocklett’s Flash Filler. For the head of the fly I use schlappen, as the soft hackles are usually not quite big enough for the bulk needed to finish out the taper. It takes practice to get them right, but I promise it looks harder than it is.

If you don’t already have Blane Chocklett’s book “Game Changer” then I highly recommend picking it up. It has a whole chapter on the feather style version with step by step tying instructions.

I hope these flies inspire you to tie and fish some new stuff this season. You never know when that 25 inch brown will come out from under a log jam to gobble up one of these amazing patterns, but I guarantee that your chances of hooking a monster will dramatically increase if you tie one on!

See you all out on the water!