Is there anything more aggravating than having a fish drop out of its feeding lie, follow your fly downstream for a few breathless seconds, its snout just millimeters away from the gleaming hook, only to reject it at the last second? How about having two fish do the same thing at the same time. Add to that the fish are two big, beautifully colored rainbow trout, and you have a recipe for utmost exasperation.

So it goes at the clear, cold waters of the Swift River, arguably New England’s most frustratingly difficult fishery. But in mid-summer, when other rivers are too hot and low to ethically fish, I wouldn’t have it any other way.

As I began my drive to the famed fishery, a light drizzle pattered the windshield of the SUV. As I neared the “biggest apple in New England” along Route 2, a stunning sight emerged across the clearing sky. Not one, but two vibrant, fully-intact rainbows created an archway over Massachusetts’ fishiest highway. I took my journey across the “rainbow road” as a sign of possible future success with the natural phenomenon’s namesake fish. 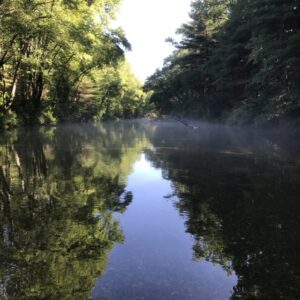 Arriving at the river, a thick fog was still rolling through the river valley. The heat of the day was still hours away, but I could already feel the temperature creeping up. Immediate relief was brought as I stepped in the icy river. With fish already lazily rising, I began casting.

A hearty rise on my Sparkle Caddis Emerger interrupted the tranquility of the morning. Soon I brought the first fish of the day to hand. The little brookie glimmered in the glare of the rising sun while I relished the fact that the long trip out to the Swift wouldn’t result in a skunk day.

Successive casts with the Sparkle Emerger resulted in no more fish. The occasional trout would follow it downstream for a split second, but think better of it before I even had a chance to blink. To up the ante, I added a tiny size 16 Chubby Chernobyl to the mix. It was the first double-dry rig I’d ever fished.

With a new weapon in my arsenal, I continued upstream to a pod of heavily feeding fish tucked tight to the riverbank. My stealthy approach ensured the trout remained feeding while I slid into position. The first cast was dead-on, landing just a few feet in front of a regularly rising rainbow. The two flies drifted quietly downstream, as drag-free as I could possibly manage. Suddenly, the rainbow slid out of position and followed the Emerger downstream, eyeing the fly with a fiery intensity. This was it! This was the fish the Route 2-rainbow had predicted!

Just as the fish opened its gaping mouth to engulf the tiny fly, a flock of geese disturbed by an angler wading just downstream charged into the pool, determined to make as much commotion as possible. The rainbow darted away, vanishing beneath the flurry of feathers.

A more excitable angler may have charged at the downstream fly fisher, fists in the air, cursing their name and fishing luck. They may have also taken their anger out on the geese, chucking rocks and sticks at the rambunctious birds. While I am proud to reveal I did not take either of these courses of action, I can’t say I exactly took the approach of an intelligent angler. Instead of leaving the pool in search of goose-less water, I simply stood there dumbfounded, watching as the prime water was ruined by an angry flock of birds. Knowing there was still a pod of big, hungry fish beneath the pandemonium, it seemed I would be playing the waiting game.

When the geese did finally decide to leave, apparently annoyed by my incessant onlooking, I got right back to fishing. It took maybe 10 or 15 minutes for the fish to start rising again. As the dimples of feeding fish peppered the surface, it was like the whole fiasco never even happened. I quickly laid eyes on the rainbow that had been-oh-so-close to flushing down my fly like a toilet bowl (well I think it was the same fish; there really is no good way to tell), but also spotted a new target: a fat, buttery brown trout.

It took me a few tries to get a presentable cast, but when I did, it was game-on. As the flies came into the trout’s field-of-view, it instantly perked up. Before I knew it, the brown was in the same position as the rainbow had just moments ago. This time, though, he finished the job, crushing the Chubby with vigor.

With the strength only browns have, the fish dove for cover, quickly finding a nearby log jam. I had a feeling the 7x tippet stood no match for the sharp sticks and strong fish. Just as soon as the fight started, I was convinced it would end. And before long, it seemed it had. The trout got me wrapped up around a log, and now all I could feel was dead weight.

Determined not to waste this opportunity at a fish that had taken me nearly an hour to fool, I waded into the deep water. As I walked, dozens of trout spooked in all directions. I untangled my line from the unruly mess of limbs, and as I did, I felt the unmistakable pulsing of a fish for a split-second. Then, all I felt was slack.

To have lost this fish after all I had endured seemed flat-out unfair. If ever I had felt like screaming profanities on the river, this was the moment. But I wasn’t even given the chance to drop so much as a four-letter word before my rod was once again bent over with the same brown trout on the business end. What a relief! But what had happened? Was the fish stupid enough to have ate the fly again? Did I snag it?

At this point, the fish was already quite tired from the arduous fight. It didn’t take long for me to bring it in, not to say that it was easy. But when I finally scooped it up into the net, I couldn’t have been more elated. Stuck in the corner of the beauty’s mouth was the size 20 Sparkle Emerger, not the Chubby Chernobyl it had eaten. My only explanation was that when the Chubby popped out, the tippet connecting the two flies had flossed the brown’s mouth, leaving the Emerger dropper to lodge itself in the trout’s maw. Talk about luck! 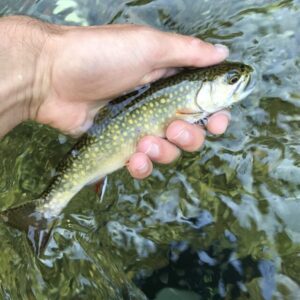 Fortunately, that was not the end of my good luck that day. I continued bouncing around the river, switching from dries to nymphs to streamers. I even managed to fool a couple more trout along the way. As my time to depart drew near, I had caught my fair share of browns and brookies, yet still lacked a rainbow to my name.

At the final run of the day, I switched back to the double-dry rig. Thankfully the wind remained at a minimum throughout the day, so I could still stalk trout in the ultra-clear water. As I tip-toed upstream, I spotted a large rainbow finning in the shallows. This was my shot.

I set up just downstream of the fish and made my cast. As the dries settled on the water’s glassy surface, a second ‘bow darted out from the undercut bank and joined the first in the shallows. Like the double rainbow earlier in the day, the colors on these fish were vibrant and stunning. Noticing my flies, the fish started to drop downstream with them, one lined up with the Chubby and the other behind the Emerger. With each second that passed, the trout edged closer to the flies, snouts nearly grazing the fur and foam. My breathing ceased, eyes wide-open, anticipating the moment of attack.

Just when I felt I couldn’t hold my eyelids open for another moment, it happened; gentle as the fog rolling off the river that morning, the slightest disturbances appeared in unison, one on each fly. I raised my rod to set the hook(s), and … felt no resistance. The flies came shooting back at me, completely fishless. Whether it had been drag, fly appearance, or some other unknown factor that had caused the ‘bows to reject my flies didn’t make a difference; the fact of the matter was that I lost my shot at both fish.

Sure, I could have stormed off the river fuming, but what was there to be mad about? The Swift’s frigid waters had just provided a terrific day of trout fishing on a day when other local freestones were sitting well above 70 degrees. While I had missed the chance at a trifecta, it wasn’t without a lack of opportunities. Besides, it’s these trials and tribulations that keep me coming back to the magical waters of the Swift River.

4 thoughts on “Trials and Tribulations of the Swift River”