Truth be told, my plan was to fish the morning spinner fall for just a few hours and then head back. So much for plans.

With temps cooler and gas cheaper, I felt motivated to get up at 3:30 am to fish. I hit a favorite spot, found an agreeable 52°F water temp reading, and waited for my favorite hatch of all: Tricos!

I fiddled with my gear and waited a long time. The Tricos never came. After catching a small brown on a dry, I forlornly headed out. For fun, I decided to spend some time at another spot, thinking I’d just be there for a short while. But there, I saw steady risers! The fish weren’t easy to catch, but I found that standing quite downstream of them, they were less wary.

The nicest fish of all was a beautiful 16″ brown that looked clean and fought like crazy (video of it here). It was a high-volume day on dries, but I wasn’t counting. It took a while to figure out what the fish wanted, but a size 20 midge emerger in the end consistently duped fish. Whenever I felt tired, hungry or thirsty, more fish rose. The hours flew by.

At 5:30 pm, I realized I had not had a drink of water or anything to eat since a morning Dunkin’ run. And, my old-man back was starting to ache. The water temp was a cool-ish 60°F as I readied to depart. I reeled up and decided to grab some sustenance when I stopped for gas. 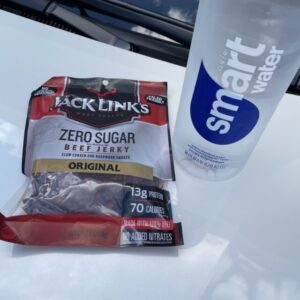 Bug are pretty tough to figure out. The Trico spinner fall, which is usually reliable in August, didn’t happen. You’d think that everything would be dead on a hot, bright August afternoon: but that didn’t happen either. Glad for the save, and one of the best dries-or-die days that I’ve had in a long time.

Hope everyone is enjoying the end of summer. But, that means some good news: football starts back up soon, hunting season will begin, and hopefully cooler temps will prevail soon and bring with them some rain.

2 thoughts on “No Tricos”