About 15 years ago, after many years of being a spincast trout fisherman, I was just getting my feet wet as a fly fisherman.  I’d been fly fishing a few times, but had always had my fly fishing mentor there to help me out.  The fly fishing bug had me in its grasp, but I didn’t have much knowledge or gear.

It was about this time that a friend, Doover, asked me if I wanted to check out the catch-and-release section of the Toccoa River in northern Georgia.  I’d been spincast fishing with Doover once or twice previously, but this time I wanted to fly fish, even if I didn’t have a safety net to help me if I got in a jam.

Doover hadn’t begun fly fishing yet, and it was something of a mild surprise that he was interested in going to the catch-and-release section of the river because Doover, up until that point, kept all the fish that he was legally able to catch.  Since that time, Doover has become an excellent fly fisherman and I haven’t seen him harvest a fish in over a dozen years. But at that point, releasing a recently netted fish was contrary to his nature.

One of the reasons I was eager to fish this section of the Toccoa River was the report of large and abundant trout residing there.  From the way magazine articles made it sound, anyone with a fly rod could catch dozens of large fish in the Toccoa.  Somewhat less ambitiously, I wanted to see if I could catch trout with a fly rod without anyone’s help.

But something was niggling in the back of my mind.  I recently had read an article in the Georgia Sportsman magazine about an otter that had been acting strange around some fishermen on the Toccoa.  They reported it to the game warden, who captured the otter.  It tested positive for rabies and they dispatched the otter.  But the article warned that there could be other otters that had been exposed to rabies. 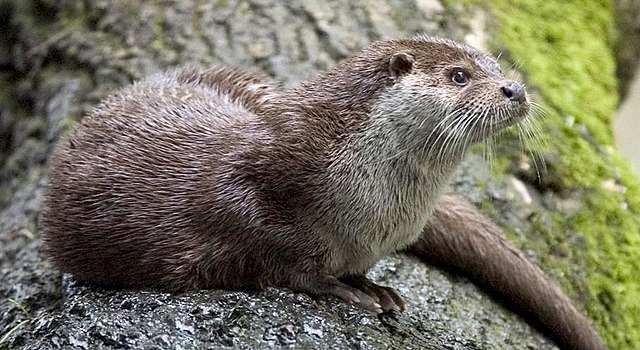 Since the area where the otter was located was about 10 miles upriver from where we were going to be fishing, I wasn’t too concerned about it.  I mentioned it to Doover, and we kinda joked about what we would do if we were to see a rabid otter while we were fishing.

When we got to the river, had you been there, you would have laughed at me and my gear.  I had these heavy neoprene waders that I used for duck hunting.  I had a two-piece White River fly rod with a used Crystal River reel, both of which had been given to me.  I found out later that the reel cost $13 brand-new at Kmart.  Around my neck was a necklace of cordage on which I tied my nail clippers to serve as nippers.  In my fly box were six to eight flies that I had left over from previous fly fishing trips.

I had a small black net that I might have borrowed from someone and never gotten around to returning.  It had a black mesh netting that had a propensity for snagging on my hooks and never letting them go. The handle had a long thin bungee cord that I attached to the loop on the back of my fishing vest.  The net bounced up and down around the back of my knees as I walked, but as long as it stayed out of my way when I was fishing, I didn’t mind.

As best I recall, we each caught several fish that day, but none of them was very big.  I remember putting on a Hare’s Ear in one promising run.  On the first cast, I hooked a nice trout but it managed to take advantage of my novice-ness and got off.  On the next cast, I caught another trout and I managed to get him into my net.  Once I released him, I found that the fly had gotten caught in the black mesh of the net and I mangled the fly extricating it from the mesh.

I didn’t have another Hare’s Ear, and that was the last bite I had all day.  Stupid net.

When we were coming to the end of our day, Doover and I were fishing about 10 yards from each other.  I was standing with my back to the current, in water that was a little more than knee deep.  As we were reviewing our successes and failures of the day, I felt something bump up against the back of my legs.

My first thought was that I had just imagined it.  But then I felt it again.  It was definitely something. I briefly thought about the otter article, but that was so far-fetched, I gave that notion short-shrift.  I looked behind me to see if there was a stick in the river.  But there was no stick.  I asked Doover, but he didn’t see anything.

Bump!  Another bump!  Still facing down river, I bent over to look between my legs to see what was bumping into them.  Just then, this solid mass of black came emerging between my knees like it was trying to swim between my legs.

They don’t give medals in the Olympics for vertical jumping in waders, but I would have set a world record that afternoon.

As I was airborne, my mind began to register what I had seen that was pushing its way between my knees.  It was the black mesh of my net ballooning with water and coming through while the net frame was wedged up against the back of my legs.

I think it may have somewhat startled Doover to see me fly up out of the water and do a belly flop right in front of him.  He wasn’t sure quite what to make of what had just happened.  It took me a moment to pull myself soaking wet out of the water, catch my fly rod as it was floating downstream, and explain what had happened.

“I thought it was that rabid otter trying to come through my legs.  I looked between my legs and saw this black thing coming through, but it was only my stupid net.”

Anyone who knows Doover would tell you that he is pretty mild-mannered and doesn’t show much emotion.  You could tell him the best joke in the world and he just looks at you like you told him that his taxes were due.

But this was too much for even Doover.  As I wiped the water out of my eyes and looked up at him, his whole body was quivering.   He tried to ask me if I was all right, but he couldn’t get the words out.  Trying to get control of himself, he turned away from me so I couldn’t see him laughing at my expense.  But for the rest of the day, every time I looked at him, he’d be grinning like a mule eating briars.

To this day, all I have to do to get Doover to smile is to mention the rabid otter.