Please welcome our newest team member: Joel Watson! He is an angler, musician, and the fly-fishing pro at Cabela’s in Hudson, MA (bio here). Here is his first post. You can follow Joel here on Instagram.

We’ve all had those days on the river (especially those of us who frequent the Swift) where no matter what you cast at the fish, they simply will not take your fly.

Sometimes you can see the fish darting around and eating something subsurface. Other times you can see them porpoising on the top, but you can’t see what they’re eating. You’ve tried dry flies, streamers and nymphs and nothing is working. There is still another type of fly that you can use in those situations. These flies are almost in a category all of their own: soft hackles.

So what is a soft hackle? I often get this question from customers at work when they ask for advice on what flies to use. Plainly put, soft hackles are a wet fly. Wet flies are about as old as fly fishing itself is. They’re often overlooked because they’re viewed as traditional and old school, but it’s one of the most effective ways to catch trout.

Wet flies are more often than not fished by swinging them in the current, purposefully letting the fly drag in the current in a quarter circle motion. Many of these original patterns are tied with duck quill wings and often look like miniature streamers, but a soft hackle at first glance looks much more like a cross between a dry fly and a nymph. In fact that’s exactly what is. They are made to resemble an emerging insect, rising from the bottom of the river to the top, where it sprouts wings and becomes an adult.

Emerging insects are always on a trout’s radar, because they’re easy for the trout to pick off as they gently rise to the surface. These emergers are especially vulnerable because they are in a state of metamorphosis from nymph to adult. The way that soft hackle feathers encompass the hook when swung in the current mimics the wing case of these insects perfectly.

The swinging motion allows the fly to naturally be caught up in the drift, and lifted up just like an emerger. Not only are these flies and this method effective, it’s also extremely fun and easy because you’re no longer mending line and working to get a perfect drift. You don’t have to obsessively watch an indicator or a dry fly, striving to get the right presentation. There’s also no need for a traditional hook set either. When trout take a soft hackle on the swing, they often set the hook on themselves. You won’t have to wonder if you had a take or not. Believe me, you’ll know!

There are many different types of feathers used for soft hackles. The most popular patterns are usually tied from Hungarian Partridge or hen saddle feathers. I personally enjoy tying with the feathers from a Starling. They are easy to work with and are often sized appropriately for the types of hooks you’re using to tie these patterns. A Starling feather has a very wispy look to it, as opposed to the spider-like feathers from a Partridge.

It’s also extraordinarily inexpensive when compared to other materials. A Starling skin will give you hundreds and hundreds of flies, and they usually only cost about $8 for an entire pelt. It’s not the most popular feather source, but it’s fairly easy to find and the fish go crazy for it. I can’t tell you how many times these flies have made the difference between no-fish days and days where I couldn’t stop catching them! They are also a wonderful addition to any beaded nymph pattern, like a Hare’s Ear or a Pheasant Tail. 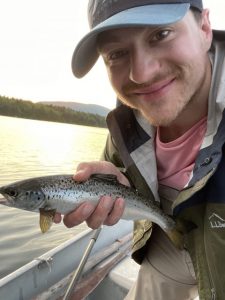 The patterns for these types of flies are usually quite simplistic. Often it’s no more than thread and a single hackle feather wrapped just behind the eye of the hook. It’s fun to tie in a variety of colors and see what the fish respond to. Orange and purple seem to be the colors that work best for me, but I’ve also had lots of success with black, brown, grey, tan, and olive thread.

Sometimes I’ll tie them with a few extra hackle wraps, which gives them the ability to float, and I’ll fish them as a dry fly. I’ve caught some of my biggest trout by fishing these patterns on the surface! If I’m swinging them, I’ll usually put a split shot or another bead head fly one to two feet above my soft hackle. Sometimes I’ll swing it with no weight. Sometimes I’ll twitch it a little bit like a streamer or do a slow, hand-twist retrieve. It’s a very forgiving type of fly to experiment with. There really is no wrong way to fish it.

Soft hackles are an often overlooked but effective way to catch fish. They’re fun to tie, and even more fun to use. Tie up a few or grab some at your local fly shop and give them a try. You won’t regret it.

8 thoughts on “Soft Hackles: Getting Into the Swing of Things”