A note from Walt: My best friend Jim and I dabbled in fly fishing throughout our teenage years. For some reason we never took the time to get any good at it, a fact I think we both came to regret. I don’t know why we didn’t make the necessary commitment…. Maybe we just loved the idea of fly fishing.

For the past few years I’ve followed this blog, enjoying both the posts and the setting: Jim and I were born and raised in Springfield MA. We primarily fished the Farmington and its tribs back then. We did make just one out of state trip together and it provided the inspiration for the only legit fly fishing story I’ve ever written.

Here it is. I hope you enjoy it.

I’m not really a fly fisherman.

I’m actually not much of a fisherman at all these days as I don’t seem to find or make the time beyond maybe a short outing or two per year in the early spring. I always take my fly rod with me intending to stick with it no matter what, but invariably somehow find myself falling back on old habits and my spinning outfit.

However, back in 1993 a dear friend and I did spend one entire day on a stream with only fly rods at our disposal….

And what a day it was.

Constant companions through high school, Jim and I had spent little time together since graduation some 13 years prior due to the demands of college, the Army, marriage, fatherhood, divorce…life. This trip was a chance to reconnect, decompress and also to finally do what we’d always dreamed of as we read issues of Outdoor Life together, usually with John Denver playing in the background: Leave our old, time-worn, and familiar Berkshire Mountains of Western Massachusetts behind and travel to the youthful and dramatic Colorado Rockies for some serious fishing.

It was, and remains, the most poorly researched trip of my adult life. We landed in Denver in the late evening, rented a car and drove up to a cabin we’d reserved in a resort town near the Rocky Mountain National Forest. So ended the planned phase of our trip. We got up the next day, went into town and found a rather high-end tackle shop. After buying licenses we asked the clerk for recommendations regarding what flies to use (we kept our spin fishing proclivities to ourselves) and where to go. He rattled off a list of rivers and marked them on our road atlas. Then he paused and looked up at us a moment, probably in the process of deciding that we were harmless due to our obvious lack of knowledge and preparation as well as the fact that our license purchase indicated we were only staying in Colorado for three more days.

“There is a little stream just inside the Park that is loaded with Greenbacks,” he said. “Would you like me to show you where it is?”

“Yes!” we instantly replied, and he did show us…on a topo map he had by the register.

He explained that it was a short but tough hike in to the special-regulation stream (fly fishing only, catch and release, single hook, barbless) and then set us up with a supply of de-barbed bead heads. We’d never heard of bead heads before (or Greenbacks for that matter) but they looked appealing enough. Maybe the gold metallic beads reminded us of our beloved Mepps spinners. We thanked the man, paid, hopped in our rental and headed for the spot he’d indicated.

The trail began with a series of switchbacks across a very steep face. It took us a couple of rest stops along the way but we got to the top, discovered that the trail straightened out and soon thereafter found the stream…just as the sky began to darken. We tried a couple of holes without success with our rarely used and almost totally unfamiliar fly rods and were rapidly losing our faith in fly fishing in general and the bead heads in particular as sleet started to fall. I distinctly recall having a sudden panicked thought: “When you fly 2,000 miles to fish, you ought to have a plan!” Suddenly I sensed something as my bead head swung across the bottom of a small pool and set the hook on what turned out to be our first Greenback Cutt. 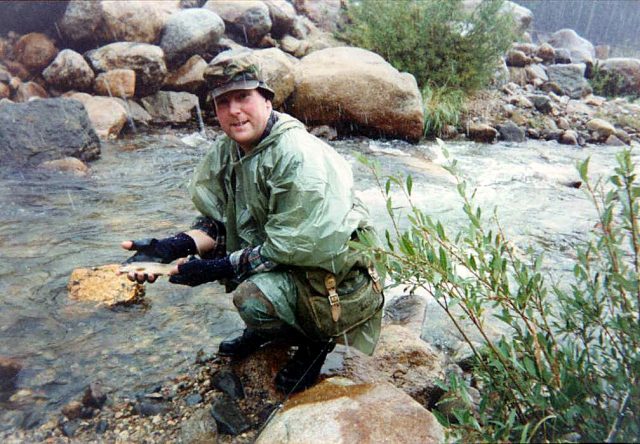 I apologize in advance for the pictures as they were taken more to capture the setting than the fish. Also, they are scans from prints taken with disposable cameras nearly 30 years ago. 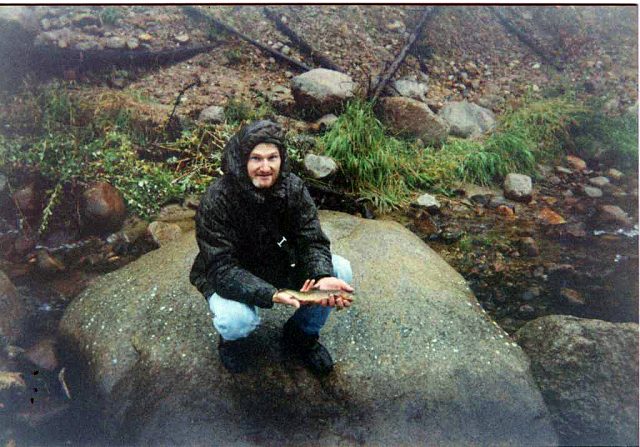 But we quickly decided to head back to the car as the sky menaced with sleet, snow and the occasional flash of lightning.

Two days later, after results on other area streams with familiar browns and rainbows that we could have easily achieved back home, and armed with a decent forecast, we decided to try again. The weather started out great and only got better as the day wore on.

Our plan was to hike from the plain at the lower right in the photo below up to the source lake at the base of the escarpments at the upper left, some six miles, and then fish our way back down.

We more than occasionally yielded to temptation and dropped off the ascending trail to try an inviting spot or two and were consistently rewarded with fish. Nothing terribly large, but any hole big enough to catch our eye proved to have multiple Greenbacks in it and they were literally shredding the bead heads. 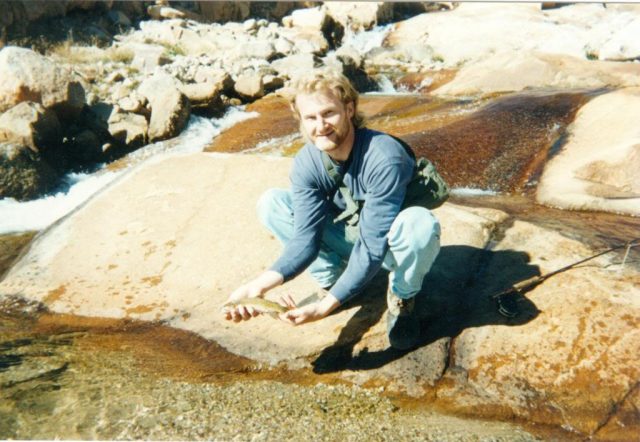 At the top of the trail, the stream emerged from an odd notch in the rocky berm that held back the lake.

The lake was a gem.

An apparently fishless gem but a gem nonetheless. The setting exceeded every expectation either of us had about being in the Rockies. I went to the library and checked an Atlas when we got back home (Al Gore hadn’t quite perfected the Internet yet) and learned that the altitude of the lake was 10,987 feet. Had I known this at the time, we’d have climbed another 13 feet just to say that we’d made 11,000.

After a short rest, and a snack for our squirrel friend… 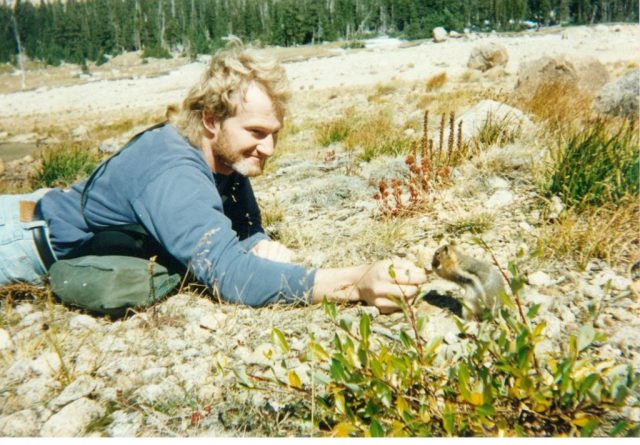 …(who bit deeply into Jim’s thumb about a second after I snapped this shot), we began to fish our way downstream.

The action was insane.

The fish were everywhere and all we had to do was get the bead heads into the water somehow and move, or simply hold, them in the current to get a strike. While we earned no style points with our rudimentary skills that day, I am absolutely sure that each of us brought well over 100 fish to hand. Probably closer to 200 a piece, in fact.

We very nearly ran out of usable flies but were to find that a bead on a hook trailing any sort of unraveled body material was enough to draw another savage strike, often from a fish that was desperately racing one or two or three others to the exotic meal which had suddenly appeared before them. The biggest fish we landed were about 11 inches long. I turned one over three times that appeared to be in the 13″ to 14″  range but otherwise it was a steady stream of smaller fish that were much more brightly colored then the ones we had caught in the lower stretches on our first trip in two days prior.

But, all good things must end.

We began to worry about the approaching sunset and none too soon. After leaving the river for good and then steadily increasing our pace until we were moving at a fast trot we got back to the switchback and stumbled our way down it to the car in near darkness with our thighs burning from exertion and a lack of oxygen.

We drove into town and found a tavern where we enjoyed a few beers and some pretty good chili. We passed on the Rocky Mountain oysters despite being encouraged to try them by our heavily pierced (rather novel back in the day), but very attractive, barmaid. I think she was bored and just wanted to see any odd expressions we might have made while trying to down the local delicacy. I don’t recall that we talked too much about what we’d experienced except to agree that it was everything we’d ever dreamed of listening to John Denver all those years ago: like a tuning fork inside each of us had been struck and was resonating a particular tone that we’d always longed to hear.

For me, the tone eventually died: a second marriage, career ups and downs…life. For Jim, the tone never faded. He became the consummate outdoorsman, never at peace unless he was outside in his beloved Berkshire Mountains, be it skiing, fishing, hunting, boating or just walking about.

I know the pictures above don’t do the fish from that magical day justice. As I mentioned they were all taken with disposable cameras and as much for the scenery as for the trout. I have, however, saved the best for last as a reward for those of you who were interested or patient enough to get this far, and for another reason as well. Here’s your “money shot” featuring Jim:

Since the first time I saw it standing outside the one-hour photo shop on the day we got back from our trip, this has been my favorite picture and a symbol of what remains the most special day in my life that did not involve a birth or a wedding.

My friend Jim and I went back to our individual adult lives keeping in touch and occasionally getting together to do a little fishing. Whenever we did manage to get together, talk invariably turned to memories of our Colorado trip. 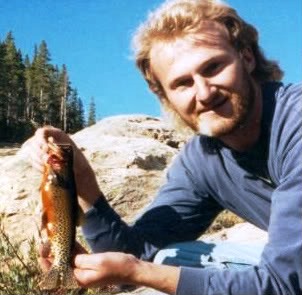 James died nearly 12 years ago while pursuing the sport that ultimately became his true passion: white water kayaking. The better photos in this story were made into a poster which was displayed leaning up against one of his kayaks at his memorial service. Since the most perfect memory I have of my oldest and best friend is the glorious day we spent on a small stream in the Rockies when we literally had no choice but to fly fish, I thought I’d also share it with all of you who, by telling your stories in this forum, have given me so much pleasure.

Who knows? Perhaps next spring I’ll finally pick up my fly rod or, better yet, one of Jim’s and stick with it.