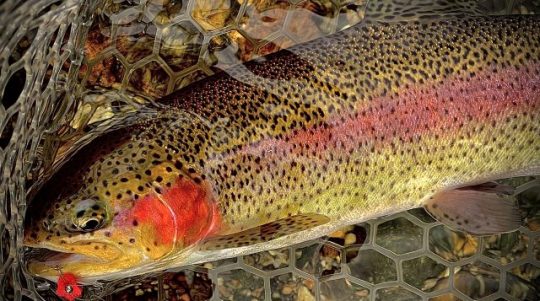 I’m not a seasonal fly fisherman by any means. I’m far too obsessive a person about the things in life that I’m passionate about.

Indeed, you will see me on the rivers whether we’re experiencing sweltering hot weather or below freezing temps. One of my favorite aspects about fly fishing is that it’s an outdoor activity that I can do all year round, with lots of success. I love throwing nymphs in the winter, double hauling Clousers for stripers in the spring, and watching big browns inhale my terrestrial patterns in the summer.

All that being said however, there is nothing (at least for me) that compares to fly fishing in New England in the autumn months. It’s hard to put into words the enchanting feeling that fall brings. The trees are putting on a show with their changing colors, the cooler temps are invigorating, the excitement of the coming holidays are starting to enter our thoughts, but more than that, the fishing becomes next level. As soon as October comes around, it’s game on!

Autumn brings a dramatic shift in both trout behavior and their food sources. Most of the major hatches are over for the year, and while for some people that means hanging up their rods and reels until spring, that is the absolute last thing I would do. This is the time of the year when certain species begin their spawn, and when other species start throwing caution to the wind and feeding with abandon in order to prepare for the coming winter months.

Whatever type of fish you’re targeting, fall brings opportunities to catch them that the rest of the year doesn’t. In this post I wanted to share some of my favorite patterns and techniques for catching trout in October and November. 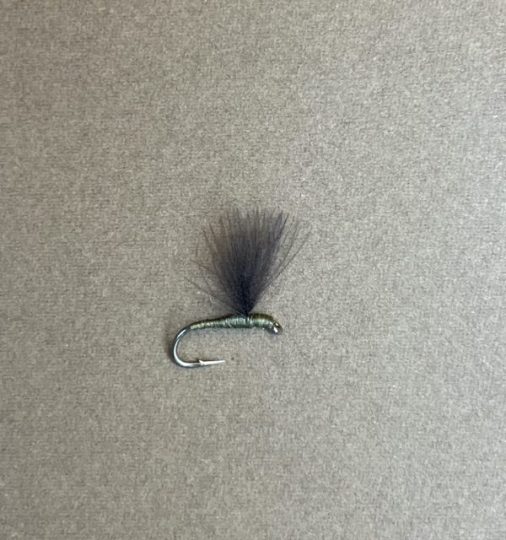 As I said before, most of the major hatches of the year have come and gone…except this one! Blue Winged Olives (or BWOs) is a name that anglers use to describe over 150 different species of mayfly that are part of the genus known as Baetis. These mayflies are the first and last major hatch, starting in late winter and going on until late fall.

Although they hatch in different sizes throughout the year, the ones coming out of the water in October are rather small. Typically a size 22-24 dry fly hook is what you wanna use to imitate them. While I’m very much a fan of tying elaborate mayfly patterns, tied to be a perfect resemblance of the actual insect, I actually catch a lot more with this simple fly. It’s nothing more than olive thread and a puff of natural dun CDC for a wing. It may not sound like much, but when it’s on the water, the skinny body and CDC feather give it an ideal profile to imitate the tiny bugs that are coming off the water’s surface.

BWOs have a tendency to hatch during cold, rainy weather. If the forecast indicates light rain or a temperature drop while you’re fishing, make sure you’ve got a few of these in your fly box. You’ll wanna use a floatant powder for the CDC to keep it dry and puffy. 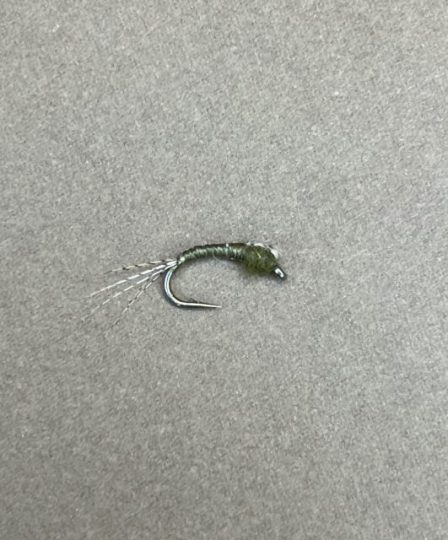 If I had to choose a nymph pattern to use for the rest of my life, and I could only use that pattern forever, it would be the WD40. This is an incredibly simple and small fly (usually no bigger than size 18) that comes with big results. It’s a Baetis pattern that represents the early life cycle stage of a BWO. It’s also a fantastic fly to use when midges are present, which is nearly year round at tailwaters.

I usually fish this as the second fly in a tandem rig with a bead head nymph as the first fly for weight. Depending on the current, this is a great way to cover two sections of a water column. The bead head nymph will sink fast and cover the bottom of the column, and the WD40 will sink much slower, allowing you to cover the middle column. This fly can also be fished as an emerger if you add a bit of floatant to it.

Tying this pattern involves only three materials; olive thread, Superfine dubbing and a wood duck flank feather, hence where the “WD” comes from in the name. Wood duck can be hard to come by, and quite expensive even if you do. A great inexpensive substitute is a mallard flank feather. The duck feather helps to resemble a wing case, as well as the shuck that these insects break out of when they mature. This fly is my secret weapon when nothing else is working, and it almost always accounts for a few fish in the course of a day. 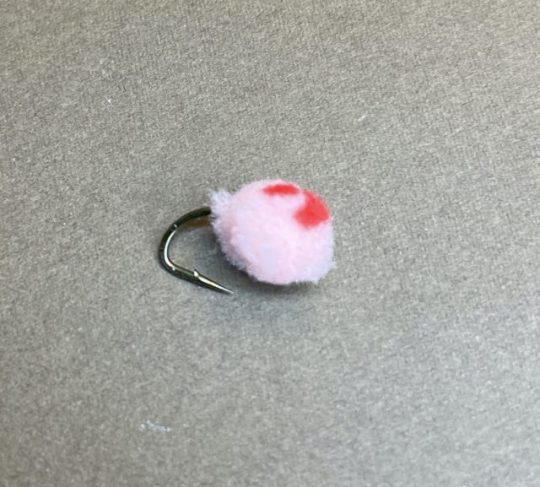 What can be said about the effectiveness of an egg pattern when spawning fish are present? The results typically speak for themselves. The glo-bug is my favorite among all the egg flies out there. This is one of those flies that many purists snub their noses at, but honestly it’s their loss if they don’t fish it. Simply put, this is THE fly to use in October and November when the spawn is on.

There are many types of yarn you can use to tie these, but hands down my favorite is McFly Foam. It has the perfect amount of sponginess and it naturally forms a round shape with little effort. I often tie them in a very wide array of colors: orange, pink, magenta, red, white, yellow, chartreuse and baby blue. My technique is usually to keep swapping out colors after one has produced a fish. If I get one on a yellow egg, I’ll almost immediately put on an orange one. This seems to keep them from getting too used to seeing one color and wising up to it. 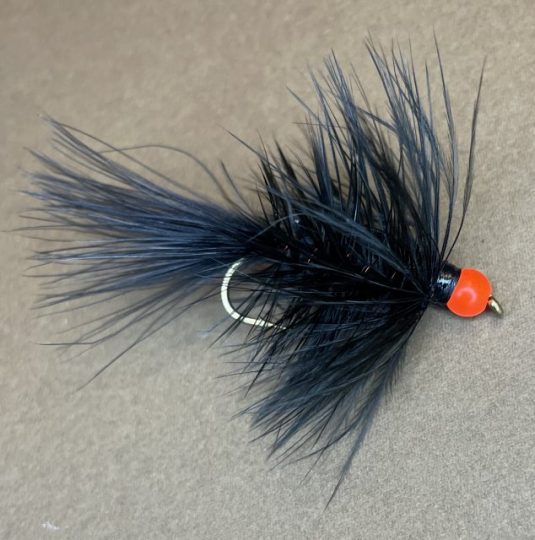 If, like me, you are always looking for an opportunity to fish a streamer, this is the fly to use in autumn. It’s essentially just a woolly bugger or a rabbit zonker leech with a bright orange or pink bead (sometimes yarn) at the front. My favorite colors to tie these in are black and brown. For the egg part of it, I seem to have the best results with an orange cyclops bead.

If you’ve been throwing eggs with no results, this fly can really turn a zero fish day upside down. It’s also a killer fly to use when the salmon spawn is happening. It’s a wiggling, pulsating, and downright annoying thing for salmon to see in their spawning grounds, and can often be just the thing to trigger a reaction strike. 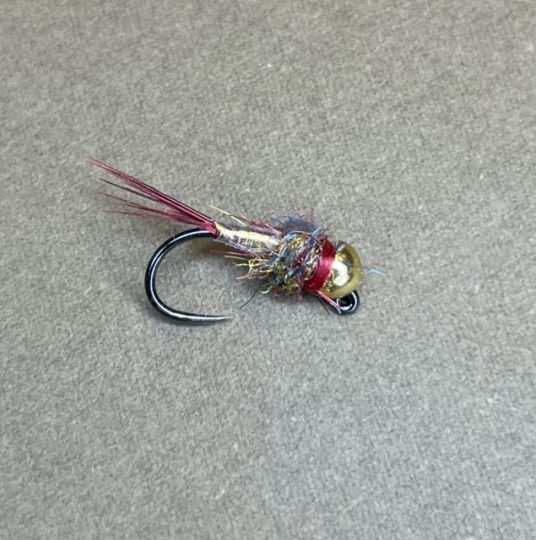 My go-to nymph when fishing anywhere besides the Swift River has got to be the Rainbow Warrior. It’s flashy, it sinks, it’s easy and fun to tie, and it works (especially in the colder months). As an attractor fly, it doesn’t imitate anything specifically, which is great because it can actually be used to imitate many things.

I like to throw this in fast currents when you need something to get to the bottom fast and get the trout’s attention. Sometimes this can even work as a searching fly. It will usually trigger a reaction, due to its bright color. Even if the fish don’t commit to it, it will let you know if there’s a fish in the area. When I fish the Quinapoxet River, I always make sure I have a handful of Rainbow Warriors on me. The trout who hang out below the Pump House absolutely love to slam these nymphs. Some of my best fish to date have been caught on this fly.

So there you have it. This is certainly not a definitive list of what will work this time of year, but all of these have worked very well for me. Get out and experiment. Tie up some different patterns. Mix and match. Find out what works for you. Hopefully this list can act as a guide for some of you and put you on a few fish. Tight lines, everyone! 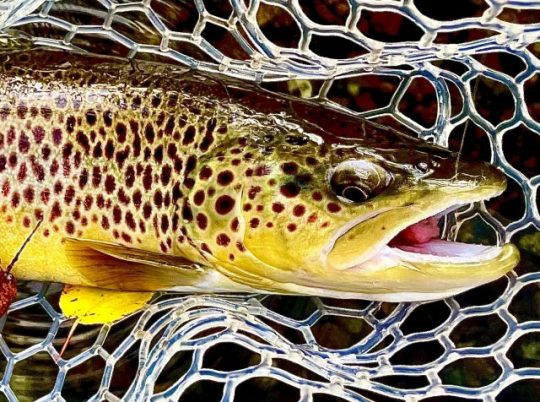