According to the Colorado Wildlife Commission, Gold Medal Streams are defined as waters “able to produce 60 pounds of trout per acre, and at least twelve 14″ or larger trout per acre. Only 322 miles of Colorado’s 9000 miles of trout streams, and three lakes, carry the ‘Gold Medal’ signature.” 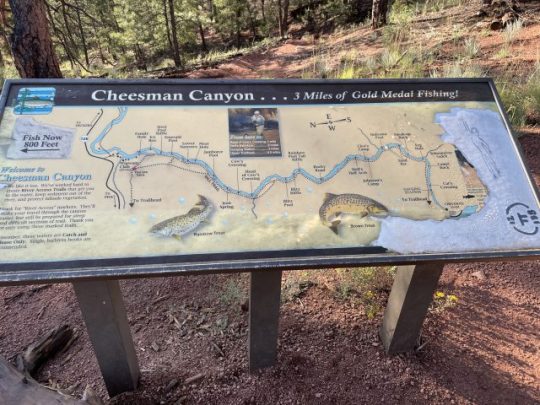 According to my definition, a Gold Medal Stream is one where it is harder to catch a trout than to put socks on a snake.

On the second day of our excellent adventure of Colorado fishing, my three fly fishing buddies and I went to the hallowed portion of the South Platte River known as Cheesman Canyon.

Eighteen years ago, when my fly fishing mentor began to acquaint me with the epic stories of fly fishing, he began with tales of climbing over rocks as big as dinosaurs, sliding down slopes that were steeper than a castle wall, and dueling with leviathan trout that snapped tippet like it was dried pasta.

Those were the tales of Cheesman Canyon.

My mentor would always take a yeoman named Pat Dorsey with him to Cheesman as his guide. Together they would test their guile against that of the wily trout of the canyon. It made for tales like those that any knight coming home from battle would wish to regale his sons.

When we arrived at 7 am, I counted 50 cars in the parking lot. Come on! Doesn’t anybody work anymore? Well, it was a Sunday. In that case, doesn’t anybody go to church anymore? I guess I don’t have room to talk. Time to change the subject. My point is that it was pretty intimidating to see all those vehicles with rod racks and guide stickers on them and to know that they were fishing in front of us.

Cheesman Canyon is one of the more challenging waters to access on the South Platte. You have the choice of a steep half-mile hike or a relatively tame two-mile hike. We chose the half-mile hike and didn’t regret it.

The trail was wide, well-worn, and windy, but not nearly as steep as I was expecting. Both Doover1 and Doover2 are like the Eveready Bunny and never wear out, so they went ahead. Both Waymore and myself had recent health issues, so we trailed behind and took our time.

After Waymore’s success of the previous day, I had decided that I was going to stick close to him while we were at Cheesman. I have a tendency to wander away from my fishing buddies, but Waymore is like a trout bloodhound. I knew it would be hard, but I was determined to rein in my wandering ways and be a good wingman.

By the time Waymore and I arrived at the river, D1 and D2 were fishing a long, smooth pool. This was no surprise. Doover2 loves to fish with dry flies, and that pool looked like just his cup of tea. Waymore started fishing behind a rock that would make a railroad car look small. I began working some nearby riffles that proved to be too fast and too strong to cross to the far side, which of course, looked better than the side we were on.

Being fairly early in the morning, there were shadows in the canyon and it was hard to judge what was below the water’s surface.  Before I knew it, I had walked through all the areas that were likely to hold trout. About that time, Doover1 comes from the other side of Waymore’s rock. “There must be two dozen trout down here and they are feeding.” I’m skeptical. How could you even see trout in these shadows? But we walked to the other side of the rock, and there they were. Big beautiful, bountiful trout, leisurely sipping away at something.

We spaced ourselves out and started throwing every dry fly and emerger that the gurus had recommended. The trout seemed unimpressed. But we were determined, especially Waymore. It was only a matter of time before we would discover what those trout had the hots for. Time passed, and more time passed. Three hours later only one trout had come to the net. And that was pretty early on. I had lucked out with a size 18 Mole Fly that a 16″ rainbow couldn’t resist.

Two hours later, after I caught my trout, I was trying to pry Waymore from his spot where he was casting to a dozen, large rising fish. He was determined to crack the code of what those trout were biting. “Come on, Waymore. Let’s try another spot.” A half-hour later, “Aren’t you ready for a change of scenery?” Another half-hour later, “I’ll bet there are trout like that in every pool of this river. Let’s go try some other ones.” A team of stallions couldn’t pull Waymore from that spot. And Tom Cruise thought he had it tough trying to be a wingman.

Waymore never caught a trout from that pool. But for the next three days, when we would talk about where to go next, Waymore was wanting to try Cheesman Canyon again. I am sure that those recalcitrant trout are still bugging him to this day. 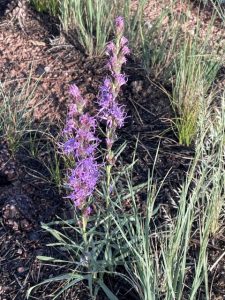 After three hours of casting to the same trout, even Waymore became weary, and we went another pool. Our master plan was to fish Cheesman until noon, then have lunch and go to a portion of the river known as the Dream Stream and fish it during the afternoon.

By the time we moved out of that first spot, we had only about 45 minutes left before our scheduled departure. Waymore and I moved to a shallow riffle and while he put on another leader, I managed to break one off, long distance release another one, and roll a third, all on a size 24 Black Beauty. Waymore worked the next riffle above me, then crossed the river and started climbing up the canyon wall towards the parking lot.

My time in the Cheesman Canyon was ending way before I was ready, but I reluctantly followed Waymore back to the parking lot.

D1 and D2 left the river about a half-hour later. D1 had several trout break off. D2 had left his dry fly box in the rental car and was lost without it.

Then, miraculously, he found his favorite dry fly, an X-Caddis, stuck to something in his fishing pack. He began having success throwing the X-Caddis to rising trout in small pools behind rocks. He lost several trout, but brought two to the net.

The grand total for the four of us on the ridiculously trout-infested waters of Cheesman Canyon was three trout in 4.5 hours. The lesson for the morning was to leave your wingman if he isn’t catching fish. And, half a day is not enough time to fish Cheesman Canyon. And, humility is only a Gold Medal stream away.  But even still, if we had the chance, we would all go back in a heartbeat.

The next post will be about our aborted afternoon trip to the Dream Stream and being re-routed to Eleven Mile Canyon.