If you are anything like me, and I know I am, you are just about ready to give up on winter fishing for trout.

I know, I know…. Nearly every day those guides and their clients on Instagram are holding up fish so big and beautiful that even Herman Melville wouldn’t have words to describe them.  It seems that winter waters are more likely to yield a monster trout than any other time of the year.

But there’s no point in fooling myself; the odds of me catching a huge trout like that are about the same as for Bernie Sanders being the Republican Party presidential nominee for 2024.

So where’s the fun of fishing in the wintertime?  All the stupid, nine-inch trout that I am so good at catching are gone.  In the winter, the freestones are either frozen, inaccessible, or otherwise devoid of trout.  So that leaves the Deerfield with its hydro-purging or the Swift with its crowds.  The Farmington does not hydro-purge, neither is it too crowded.  That river is just a sad reminder to me that, after 14 years of fly fishing, I still can’t catch more than one or two fish on a cold winter’s day.

In mid-February, the good people of the Connecticut Department of Energy and Environmental Protection (DEEP) had mercy on me and the other beleaguered trout fishermen of the region and began stocking their rivers. If I had had to wait until the MassWildlife folks stocked their rivers in April, I don’t think I’d have made it.  Thank you, DEEP.  You gave us hope.

On the weekend after the stocking notices went up on the DEEP website, Doover2 and I went desperately seeking stockies.

In a perfect world every trout stream would be full of healthy, hungry trout year-round.  Variously-sized trout would be in every pool.  No stocking would be necessary and every fly fishing soul would have a half-mile-long beat that was exclusively his or hers to fish.

But we live in a world where, with few exceptions, there wouldn’t be any trout in rivers at all were it not for the efforts of the noble stocking trucks. Sure, I wish it didn’t have to be that way and there are probably some ways we could lessen our dependence on stocked trout, which I’d be happy to see implemented. But until that day, whether you are a guide, grouch, or a greenhorn, just about everyone is happy to see the rivers refreshed with new trout.

When my fly fishing buddy, Doover2, and I pulled up to the fly-fishing-only section of the Willimantic River, I realized that it wasn’t going to be as easy as I had hoped.  There were boot tracks in the snow that were heading right for the place I wanted to fish.  The fish had been stocked on Thursday, it had snowed on Thursday and Friday night, and I was there on Saturday morning.  The deep tracks were covered with snow so I figured our predecessors had been fishing the day before.  Drats, someone had beat us to the virgin trout.

When I had gotten all geared up, I checked with Doover2.  He said he hadn’t put on his long johns yet and I should go ahead and start fishing.  I’ve learned that sometimes it’s best just not to ask questions about such things.  Generally, I like to be generous about letting Doover2 have first crack at the best pools. But, if he can’t figure out that he needs to put on his long johns before he puts on his trousers, I think he loses the right to first dibs in the pool.

By the time Doover2 got his long johns and other accoutrements on, I had two pretty rainbows in the net and was successfully long distance releasing a third.  D2 moved into the river downstream of me and started catching one after another while my action totally stopped.  I must have given him the best spot after all.  I was trying to think of a way to get him out of that spot, but couldn’t come up with anything that would move him.  D2 has a PhD and can be hard to fool sometimes. 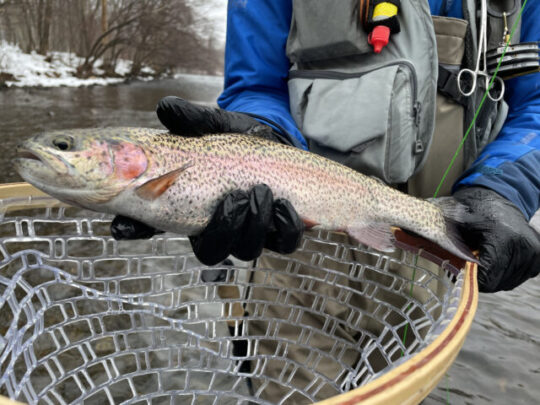 I decided to cross the river and fish opposite him.  I knew he’d appreciate my sacrificial effort to put myself in position to give him some pointers. By the time the trout got wise to us, we had educated about 14 rainbow and one brown.  It was time to look for another spot.

We spent the rest of the day exploring new parts of the river but we never found any stockies or any other fish for that matter.

Something strange happens in the mind of a fisherman when he is fishing for recently-stocked fish. Instead of thinking about the habits of trout, he begins thinking about the habits of men.  Instead of considering where a trout would most likely be hanging out, he starts thinking this: “Where would some tired men who have been hauling fish around all day be most likely to dump a few bucket loads of trout?”

At least that’s what Doover2 and I should have been thinking.  We should have been looking for bridges and pull-offs that are close to the road.  Not tromping through eight inches of snow looking for some far-off bend in the river that hasn’t seen man or brookie in four months.  Say what you want, but there is a fine art to finding stockies, and D2 and I were using crayons.

The next weekend, my friend Chris and I went desperately seeking stockies.  By this time, DEEP had put some new trout in the Farmington River, and I was ready to forgive the Farmington for breaking my heart several times in recent winter months.

Did I say the Farmington River wasn’t crowded?  Even on a day when the temperature didn’t rise above the mid-30s, there were fishermen stacked into the most obvious places for the trout to be stacked.  Chris and I waited for our turn at one of the most notorious pools, knowing that many fishermen are impatient fools, even when they are standing in front of more trout than they can shake a stick at.  If they don’t catch one in ten minutes, they are ready to get out of Dodge.

When Chris and I finally worked our way into the primo spot, after 10 minutes without a bite, I was ready to get out of Dodge.  Finally, I got a solid take on a white egg pattern, but as I was looking around to make sure everyone saw that I had a fish on, it was offended by my lack of attention and bid me adieu.

At that point, having had a long-distance release, I was the expert on what the fish were looking for.  I tried to coach Chris up, but since he has experience fishing with me, he just did the opposite of what I was telling him and caught four in a row.  I am the anti-Belichick.

As I was thinking of ways to get Chris to switch spots with me, I managed to catch a modest-sized rainbow and all thoughts of throwing rocks into the area where Chris was fishing left my mind immediately.

The South Carolina Department of Natural Resources puts a mind-boggling twist on those who would seek out stockies on the Chattooga River, my home water.  In order to stock trout in areas that are inaccessible by truck or ATV, they stock with helicopters.

Check out this one-minute video:

When fishing these places, you really begin to question whether you should be a fly fisherman when you start asking yourself, “Where is there an opening in the tree canopy?” or “Would that run be deep enough to drop trout into from 30 feet up?”

Chris and I tried a few pools in non-stocked sections of the river, but of course we didn’t catch any.  On our way back to Boston, we decided to stop at one last spot.  There was one set of tire marks in the snow going back to the pool and we joked that it was probably the stocking truck’s.  And to our surprise, it actually was.

After three casts and three trout to the net, I was happier than a tornado in a trailer park.  When I noticed Chris reaching down to pick up a rock, I decided to graciously share my spot with him.  I didn’t need a PhD to figure that out.