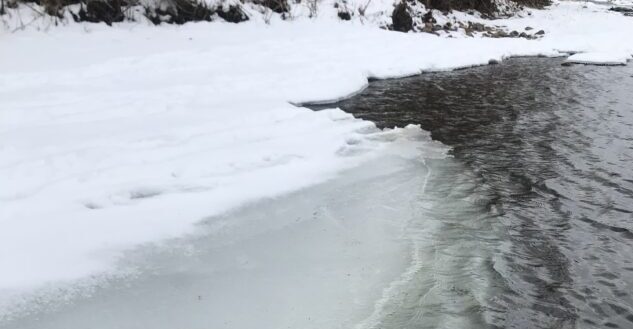 We are still in the grips of winter with cold snaps, shelf ice and sleepy fish. But after not fishing for a few weeks and being at home nearly all the time, I decided to think less about Saturday’s weather forecast and just go for it.

It was fishin’ time!

It was a lot of driving and a lot of work for just three fish, but it was so great to see them. I had to fight some wind but it wasn’t too cold. And I didn’t cross paths with any other anglers.

The trout were at classic winter lies: some depth to the water and some current but not too much. And there was no “hot fly”. The three patterns that took fish were a #20 Midge pupa, a #16 Stonefly (in the middle photo above) and a #16 immature Hendrickson nymph.

But the common technique was tightlining on an all-mono rig. I didn’t want to deal with iced guides.

The Midge was on a drop-shot rig, as I was wondering if pressured fish try to avoid nymphs with beads. The unweighted Stonefly trailed a black Euro jig streamer (cast quarter-down) and I occasionally pulsed the tandem team up and down. 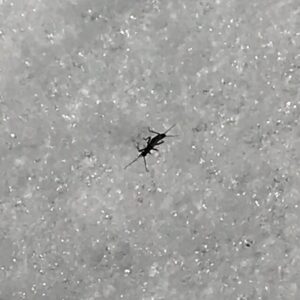 The Hendrickson was also on a drop-shot rig, paired with a small split shot meant to get flies down into a sharp drop-off and avoid snags. The spot looked fishy as anything and just seemed to beg for some drifts.

The best news was that I saw a few quarter-inch Stoneflies crawling on the ice. That’s a great sign that we are turning the corner.

It’s been an unusual winter in many ways, and I’m looking forward to spring!

4 thoughts on “Turning the Corner”