With all of the great writers on this blog, I’m resigned to the fact that my posts are plain-vanilla and quite pedestrian. The other guys are damn-good writers, and it is a privilege to be associated with them. But, since we all write to pull our own weight and contribute to the team’s effort, here’s a quick report from today.

I arrived way too early at the river today. With headlamp on, I hiked for a bit in the dark until I got to a favorite stretch and readied my seven-weight. It was chilly, dark, and I was eager to throw some articulated streamers and feel the “chomp, chomp” of a fat brown.

Last year, I spent a lot of time making and throwing big streamers. It’s a “go big or go home” strategy that aches the shoulder and tempts the attention span. I have to be in the right mood for it. But, after a few months of throwing tiny dries, it felt good and right to throw a change-up.

Though water was very low, I thought it was worth a shot. I’ve seen browns start to pair up and some aggressive males slash at each other. My hope was to trigger a big brown to clamp down.

I worked a very long run very thoroughly and chucked the meat for about 50 yards. I had one grab, which felt like a peanut, and it soon fell off.

Then, absolutely and resolutely nothing at all. It’s a bit early for streamers, particularly with water so low. But, I’d rather have a false start and be early than not be in it at all.

Once the sun started to rise, I switched to my dry-fly rod and waited and waited for rises. I predicted it would be a low-percentage game, too.

After a bit, the Mother of All Midge Hatches started. I mean, it was bugs galore and the air was filled with size 52 midges buzzing to and fro and surrounding me. Some tepid rises started, but nothing programmatic or steady. Still, I rotated through the usual flies and even put on some 8x.

I looked at the foam lines and couldn’t seen any bugs. And, with the sun bright, very few fish dared to feed up top.

Today, the trout won. After five hours of throwing dries, I called it quits. I’ll blame the cold snap and that bad days balance out the good days so that you regress to the mean. For me, dries didn’t work today. The browns deserved the win.

So, I hiked back to the car. I was thinking of heading home. Saturday is now a work day for me. My plate is quite full these days, as I have two day jobs until January: I am teaching at one of the Boston-area business schools, which has been a hoot. It is energizing to be with smart, driven, and thoughtful students. It has given me hope.

But, I wanted to see a fish, and so, I decided to fetch my Euronymphing rod and then doubled-back to the river.

The sun was high, the water was extremely low, and I surmised that a particular run might hold a feeding fish or two. Unfortunately, when I got there, another angler was tightlining the area. I waited patiently and “floated the sighter” below him at some soft water to kill time without making him feel uncomfortable. After a bit, he gave up, and I waded up.

A few casts in, the sighter paused, I lifted the rod, and I saw a flash. Thankfully, the fish surged forward, which gave me a good angle. I put on some side pressure and kept the trout above me.

I smiled. It was a good brown, and it was nice to feel, finally, the electric pulses of a decent fish on the line.

As the trout started to tire, I applied upward pressure to elevate it to the faster water and force it to sprint. Soon, the fish paused to take a breather. It drifted down into my net without too much drama. It was a quick fight, which is what I shoot for. It’s better for the fish and reduces the chances of a barbless hook dislodging. 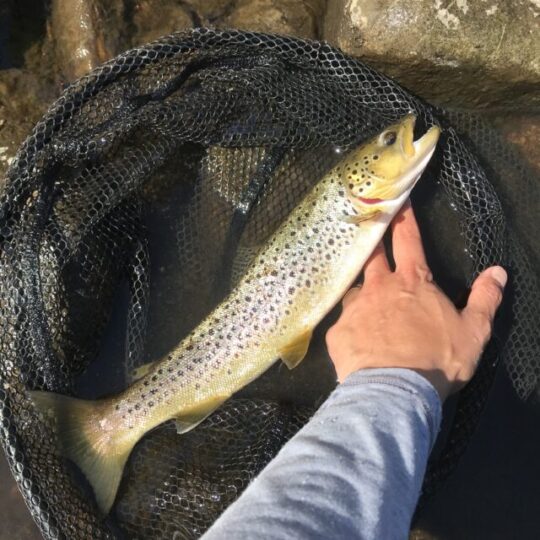 The brown was probably around 16″ and looked clean. So many fish these days have mangled mouths and/or are missing maxillae, given all of the pressure our waters have been getting during the pandemic. This one was intact, frisky, and pretty pissed off that it was in a net. It had taken a midge pattern.

I had mixed feelings when I released the fish and watched it glide away. I knew I was done.

There’s a lot going in our world today. Much of it totally sucks. I was grateful that I could try to forget all of it for just a few hours. The worries of the day can be a bit much, IMO.

After I watched the brown disappear into the deeper water, I decided to call it. I reeled up and walked back to the car. Work was calling, and I didn’t feel the need to see more fish. Sometimes, one good brown is more than enough.

With the right flies and at the right spots, tightlining really delivers. Now, back to work.

4 thoughts on “A False Start”