Here is another funny guest post from blog reader, Bill Hager, who is a chaplain at MIT, a freelance writer, and an avid fly angler from Boston.

For two full days and one morning, I had my butt kicked by a destination river, the South Holston in east Tennessee.

According to those who make their living by shocking and fondling fish, there were 10 million trout per mile in the SoHo, but not a one of them would consider my offerings. I had tried big and little, top and bottom, junk and natural. Finally, I humbled myself and went into a local fly shop and asked with what I should be fishing.

You’ve got to know that they love to hear that question in a fly shop.  I might as well have said: “Here’s my wallet. Is there anything in here that you could use?”  With a haughty manner that only young guys in a fly shop can get away with, he took me to the fly boxes and started putting little specks of dust in an empty round plastic ketchup container.  “Yeah, they’ve been tearing up these toaster-emergers, and these microwavers, and these remidgerators.”

I was totally confused as to which appliance corresponded to which fly, but when you are desperate and when you are already being arroganced-to-death, you don’t ask any clarifying questions. 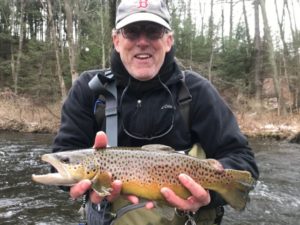 Finally, as I finished putting the next three month’s fishing budget on the credit card, I wanted some sort of assurance, and I worked up the nerve to ask, “So, are you saying that if I use these flies, that I will catch some trout on the South Holston this afternoon?”

He looked at me with the smugness of a cat that swallowed the canary and said, “I guarantee that if you use those flies and have a drag-free drift, you will catch some fish.”

There it was: the drag-free drift.  It’s the world’s best “out.”

It’s getting ridiculous. I put money in a drink machine last week, and a sign popped up on the machine and said that my Coke didn’t arrive because I didn’t get a drag-free drift on my dollar.

You know what? I think the drag-free drift is a hoax. (For the record: lightning didn’t strike me when I typed that.) It’s the same as using pixie dust to fly or going into the woods at night and holding a bag to catch snipe. It’s a deer whistle for your truck’s front bumper.

It’s the product or technique that has been gangbusters in Europe, wink, wink. But, the secret is just now getting to the United States. It’s a gimmick that’s been foisted upon sincere novices, who are rock climbing the steep learning curve of fly fishing.

Recently, I read an article that said that, even when it looks like you are getting a drag-free drift, you’re not. There are micro-drags that you can’t even see that are affecting your fly. That explains everything. If we ever learn to eliminate the micro-drags, there will be someone telling us that there are nano-micro-drags with which to concern ourselves. 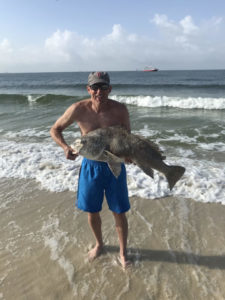 As is sometimes the case with hoaxes, the exact opposite is the way of truth. Consider the Woolly Bugger. Many times, the take comes when it is swinging wildly at the end of the drift, like the last person on an ice-skating chain. Drag-free? Hardly!

And, how many times have you been working your way up a river with a nymph or two dangling in the water behind you, and, lo and behold, the same trout that spurned your previous drag-free drifts, found your dragging drifts irresistible?

It’s time to end the tyranny of the drag-free drifts. Let’s trash our Egan/Olsen videos, and burn our George Daniel books. Long live the Thingamabobber!

In case you missed that I am writing this tongue-in-cheek, I actually do aspire to attain drag-free drifts, and, when I do, it is a beautiful thing to behold. But, if you see a dude working his way upstream trolling while he’s strolling, come by and say “hello.”

9 thoughts on “Bill Hager: ‘The Truth About the Drag-Free Drift’”