It’s been a fly-fishing holiday weekend. And, there has been some incredible dry-fly action.

First up, I took the Mrs. to the Swift on Friday morning. It was her second time fly fishing and her first to the Swift. She fished, I guided.

We met some nice guys who were doing well Euronymphing over a pod of fresh trout. They were very friendly and open about what flies to use. They surprised us by giving up their spot. A “gift on the river,” just as Jamie Carr experienced at the Millers.

One guy is Arturo. I didn’t catch his friend’s name, unfortunately. A big shout out to both of them!

I went to the Farmington on Saturday. The morning midge bite was decent, and there were some tiny spinners in the water. I have to say that the fish have been getting harder to catch on dries as each week goes by. 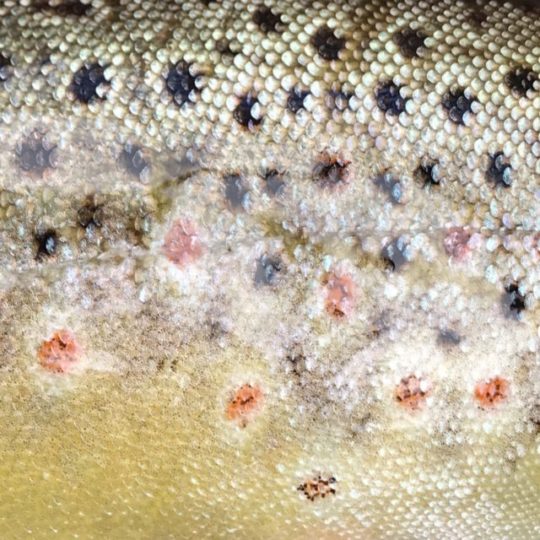 I brought both my #4 and my #000 fly rods to the river, hoping to see if I could catch some fish on the latter. It took work, but I did land some good fish on both.

As I’ve found in the past, the #000 was faster at landing fish. The fish don’t feel that much resistance, and so, you can pull them in pretty fast before they realize what’s happening. Unfortunately, that rod just doesn’t have reach. When I got closer than 30′ or 40′, fish would slide away, and the #000 doesn’t cast that far that easily.

As with prior outings, all takes were on downstream presentations. I saw some nice browns.

Around noon time, I almost broke for lunch. But, a few bugs started to pop, and so, I kept casting. Gradually, the bug volume rose until I found myself amidst a mother lode of a Attenella attenuata hatch. I mean, there were bugs everywhere and aggressively rising fish all around. An angler’s dream!

Unfortunately, I wasn’t having much luck. This is a tough hatch to fish. Here’s what a Delaware River guide has to say:

As attenuata nymphs split their husk the freshly hatched duns appear very pale green in color, and continue to grow darker as they drift along the waters surface. Looking closely at floating duns will reveal colors from very pale olive, bright yellowish olive, tan-ish olive, to dark olive. This adds complexity to consistently hooking rising trout, as the fish not only lock into one color to feed on, but seem to change color preference as the hatch progresses. The angler fishing this hatch should be well prepared with all of these color variations.

I was below a pod of rising fish and worked them for about an hour with just one fish in the net. The trout were extremely picky, very much like during a Trico hatch. My fly wasn’t the right shade of green. I picked up some bugs, and my flies were too dark. After throwing over and over my experimental attenuata patterns, I gave up. I rotated through about 20 other flies, hoping a brown would make a mistake. Nothing. The fish were keyed in on color.

When the angler above me left, I moved to the bank and put back on the attenuata pattern that had duped that one fish. I was able to throw at some faster water. And, that made all the difference, amazingly. The trout had to react quickly, and I fortunately landed quite a few fish. All of my takes were on curve casts that let me give a downstream presentation.

After quite a few browns, the hatch calmed down, and I took a much-needed break. I gazed randomly at the river and started to space out. Then, I noticed a long fish in about six inches of water right next to the bank. Even though the sun was bright, it ignored me and lazily sipped duns that went by. I couldn’t believe it! I felt like I was at a trout farm, as the fish was that visible.

I gave a cast, and the brown ignored the fly. I cast again. The fish looked up, paused, and then slowly sipped the fly. I set the hook at the right time, and there was instant bedlam. 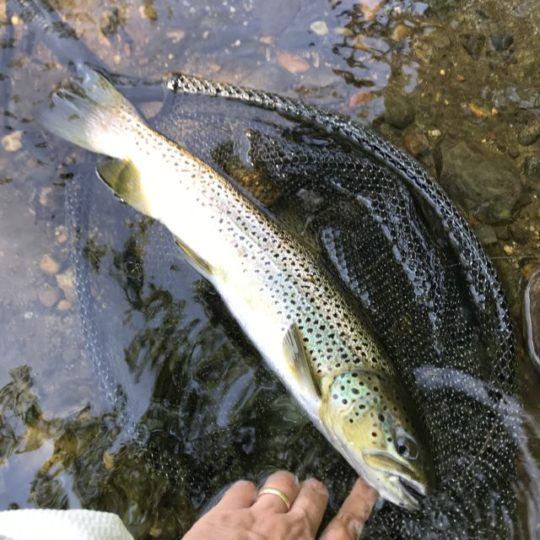 This nice fish said hello. It taped at 17″ and really made my day.

Buoyed by such a fun dry-fly outing, I decided to skip lunch and keep fishing. I moved to a different spot, hoping to catch some afternoon bug activity. When I didn’t see rises, I decided to Euronymph a run. The river was unusually gracious, and I saw three nice fish very quickly. Tightlining really produces!

A bit later, some bugs started to pop, and there were a few rises. I managed a few browns and was thinking of staying for the evening hatch. But, with 12 hours of fishing and a high volume of fish already under the belt, I ran out of gas. It was time to reel up and drive back.

To get a better shade of green on my attenuata fly patterns, I’m open to ideas. Any suggestions? I’ve tried thread, various types of dubbing, and a lime-green Sharpie, but none is right thus far.

I hope everyone is enjoying the holiday weekend….

13 thoughts on “A Dry-Fly Session with Attenella attenuata”